Reported to be the first raid of its kind in the country, Jordanian police seize several tonnes of drug substances. 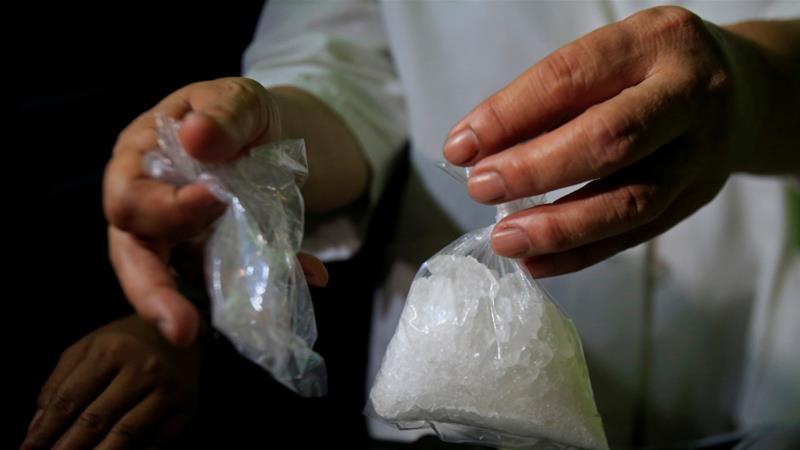 Jordanian police have shut down a facility that was producing illegal drugs and masquerading as a factory for cleaning supplies in an industrial area in the capital, Amman.

The site was reportedly manufacturing Captagon, an amphetamine-based drug that is one of the most popular narcotics in the Middle East, including among fighters in Syria’s long-running conflict.

The anti-narcotics department (AND) said on Tuesday that it had confiscated several tonnes of enough material to make more than 100 million pills.

According to the official news agency, Petra, it was the first raid of its kind in Jordan, and eight people in total were arrested.

The main suspect was arrested at the facility, after the AND had worked for months pursuing information based on a tip-off.

The AND had gathered information about the suspect who had imported chemicals used to manufacture detergents.

In a statement, the Department of Public Relations and Information (DPS) said that the suspect had sought the help from foreign nationals to process the chemicals and extract elements to produce pills of Captagon, a psychostimulant.

On the same day, another AND team raided an apartment in Amman that was used as storage for the drugs and found two million Captagon pills there. Another suspect present at the scene was also arrested.

Six other people who had planned to smuggle the drugs outside the country were arrested elsewhere, the DPS said, and the investigation is still ongoing.

Captagon has been the drug of choice for many fighters in the Syrian conflict.

In November 2015, 11 million pills were seized by Turkish officials at the Syria-Turkey border.

The drug can be bought cheaply at $2, and Syrians in refugee camps in Lebanon are increasingly turning to using it, Ramzi Haddad, a Lebanese psychiatrist and cofounder of an addiction centre called Skoun, had previously told Al Jazeera.

“In the short term it makes people feel euphoric and fearless and makes them sleep less – perfect for wartime fighting, but in the long term it brings on psychosis, paranoia and cardiovascular side effects,” added Haddad.