A judge has praised Insulate Britain protesters whose M25 stunt delayed an ambulance carrying an ‘urgent patient’ as 12 were fined over a demonstration which disrupted the journeys of an estimated 18,000 drivers on the M25.

The eco mob blocked traffic, including an ambulance carrying a patient, by sitting across Junction 3, a busy interchange on the motorway at Swanley, Kent, on September 29, 2021.

Some demonstrators glued themselves to the tarmac, one stuck himself to a police car and another, Karen Matthews, refused to move out of the way of an ambulance that was transporting a patient to hospital, the court heard.

Matthews, 60, was among three protesters – including Ian Bates, 63, and Biff Whipster, 54 – who were told by District Judge Stephen Leake they had ‘inspired’ him after making impassioned speeches about their concerns over the climate while representing themselves in court.

But the judge added that his role was to ‘apply the law’ and said their actions had caused ‘significant disruption’ to the motorway.

He said: ‘I have heard your voices.

‘They have inspired me and personally I intend to do what I can to reduce my own impact on the planet, so to that extent your voices are certainly heard,’ the judge said.

‘These are difficult cases for us judges because we have to apply the law and that is what we have sworn our judicial oaths to do.’ 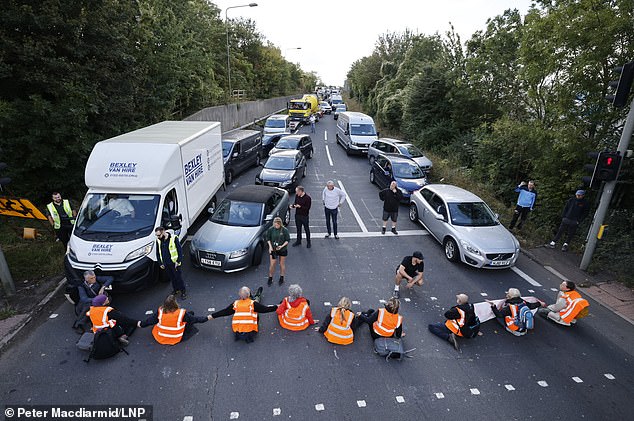 Activists from the Insulate Britain climate change protest group blocked the road near to junction 3 of the M25 motorway near Swanley on September 29, 2021 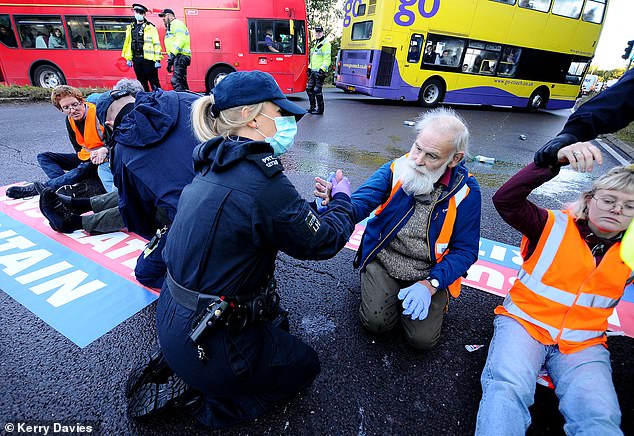 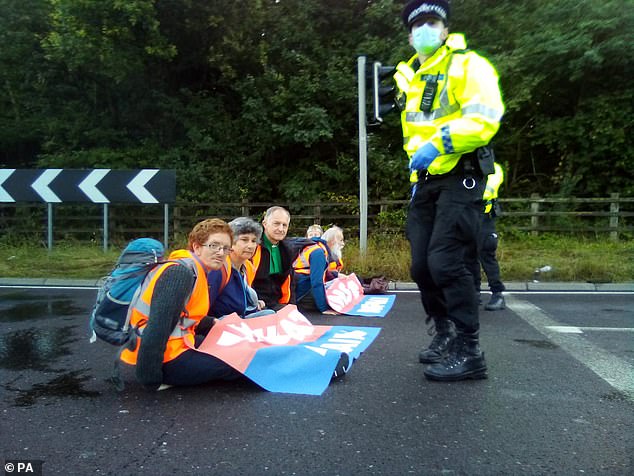 Another protester ran into the road and blocked an ambulance transporting a patient to hospital, a court heard 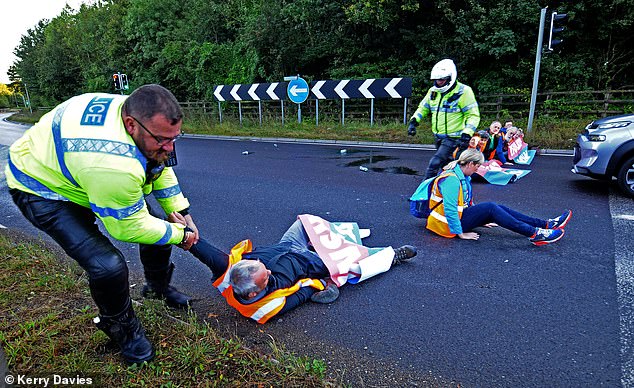 In total, nine of the activists admitted charges in relation to the protest either by post or in person at Crawley Magistrates’ Court on Tuesday.

Bates and Matthews, as well as Mary Adams, 68, Margurite Doubleday, 67, Bethany Mogie, 39, Xavier Gonzalez-Trimmer, 21, and Lucy Crawford, 52, each pleaded guilty to wilful obstruction of free passage of the highway.

Whipster, from Canterbury, admitted criminal damage by leaving a ‘hard, crusty layer of glue’ on the window of a police vehicle during the demonstration.

The court heard how a number of protesters had been spotted by police officers ‘hiding in woodland’ before the chaos unfurled near the junction.

Prosecutor Kat Shields said two were asked whether they were there to demonstrate to which they replied: ‘No, we are just nature lovers.’

But the group then ran into the middle of the road and spread out across two areas of the junction, bringing traffic to a standstill, the court heard.

An ambulance carrying a patient who ‘urgently needed to be transported’ was delayed when Adams refused to move out of its path, with officers having to ‘drag’ her out of the way, the prosecutor said.

The cost to the economy caused by the disruption was about £4,603, with an estimated 18,000 vehicles affected across the wider area, according to evidence from National Highways.

The demonstration made a mockery of a government injunction that was supposed to stop the activists.

Protesters attending court, all of whom sat in the public gallery throughout the hearing, claimed they had exhausted all other means of campaigning over the climate crisis and resorted to ‘non-violent protest’ to highlight their cause.

Tissues were passed around by a member of court staff as several broke down in tears and held their faces in their hands while fellow activists voiced their fears over a ‘desperate’ environmental situation.

‘I walk around and people are completely and utterly unaware of it, immune to it… We carry on like we’re just doing our jobs.

‘We’re not doing our jobs we’re killing everybody.’

He added: ‘The very last thing I have left is to exercise my right to peacefully protest and for that protest to bring to the attention of the British public the desperate situation we are in.’

The judge said the protesters had ‘no doubt’ been acting in a way they believed was ‘morally right’ but had still committed a criminal offence. 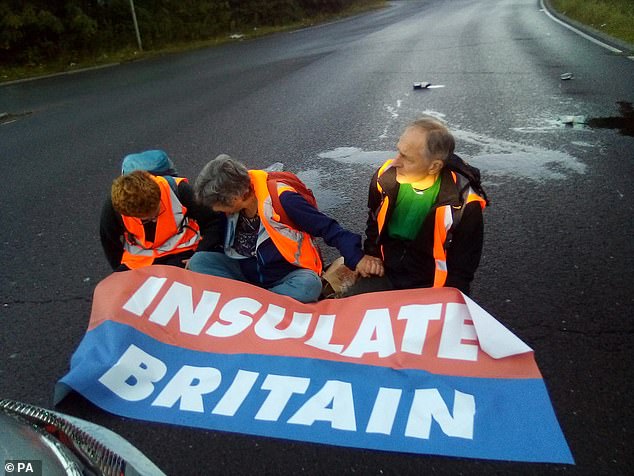 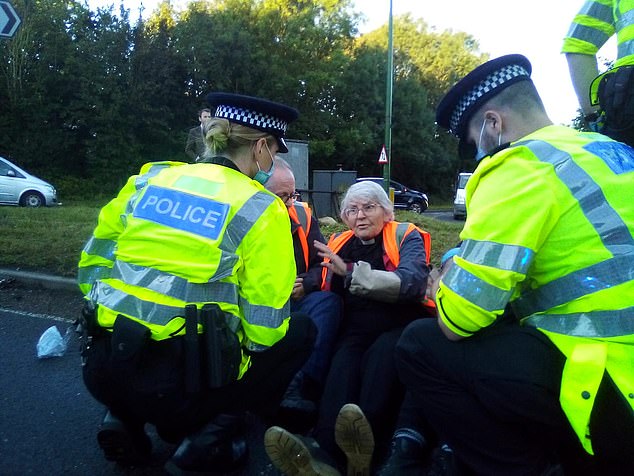 The cost to the economy caused by the disruption was about £4,603, with an estimated 18,000 vehicles affected across the wider area, according to evidence from National Highways 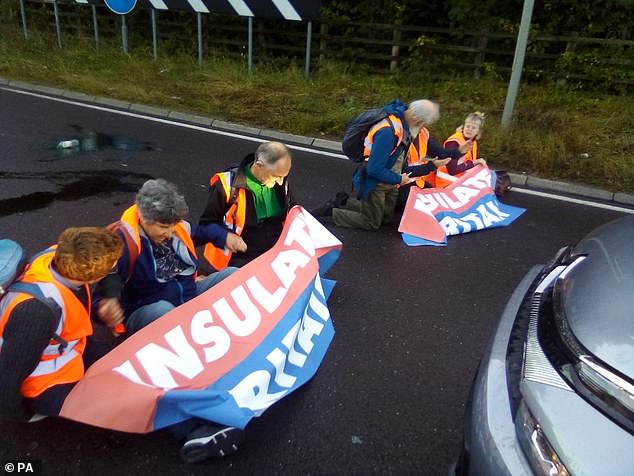 The group ran into the middle of the road and spread out across two areas of the junction, bringing traffic to a standstill, the court heard

Bates, of Northampton, Crawford, of Cambridge, and Mogie, of Hertfordshire, were fined £200 while London-based Gonzalez-Trimmer, who had previous convictions for similar protest-related offences, was fined £266.

Whipster was handed a £120 fine, with the judge taking into consideration his financial situation and the fact that he is currently on Universal Credit.

Adams, of Greenwich, was fined £250 after the judge found her refusal to move out of the path of the ambulance a ‘serious’ aggravating factor while Doubleday, of Gloucestershire, was fined £150.

The pair had entered their guilty pleas by post and did not attend court.

Five protesters, Tim Speers, Daniell Thomas, Peter Morgan, Louise Lancaster and Iain Webb did not attend court and were convicted of wilful obstruction after a trial was held in their absence.

Thomas and Speers were fined £200 while Morgan, who had previous convictions for similar protest-related offences, was fined £400.

Two defendants, 28-year-old Gabriella Ditton, of Norwich and 74-year-old Barry Mitchell, of Telford, each indicated not guilty pleas to wilful obstruction and will attend Horsham Magistrates’ Court on May 11.

Another three, Victoria Lindsell and Michelle Charlesworth, each accused of one count of wilful obstruction and Louis McKechnie, charged with criminal damage, had their hearings adjourned until April 28 at Crawley Magistrates’ Court.

In the days after the September 29 protest, the mastermind of Insulate Britain sparked fury when he said he would block an ambulance with a dying patient inside in order to continue his eco-protests.

Without a moment’s hesitation, Roger Hallam gave a firm ‘yes’ when asked if he would block an ambulance transporting a critically ill patient to a hospital for treatment.

The extraordinary admission, made during an interview with the Unbreak the Planet podcast, came after a tearful woman was filmed urging Insulate Britain protestors to move so she could get her 81-year-old mother to the hospital.