‘He promised me an award then made me look like a pedophile’: Judge’s $95million lawsuit against Sacha Baron Cohen lifts the lid on the prankster’s deceitful tactics

Roy Moore’s lawsuit against Sacha Baron Cohen lifts the lid on how the comedian and makers of Who Is America? repeatedly get guests to make a fool of themselves.

In a recent filing he exposed how by making interviewees sign consent of appearance agreements by founding ‘made-up’ networks and creating false characters, Cohen, Showtime Networks and CBS are able to dupe guests.

It emerged in response to a motion to transfer a lawsuit from Washington DC to New York on Wednesday as the judge sues the three parties for $95million.

The former Chief Justice of Alabama originally filed a claim on September 5 for ‘Defamation, Intentional Infliction of Emotional Distress and Fraud’ regarding his July 29 appearance. 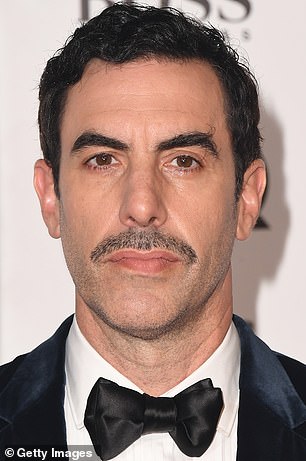 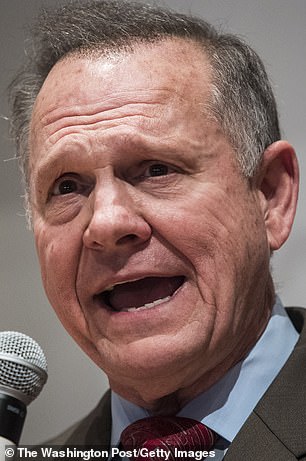 Roy Moore (right) filed an opposition to a motion to transfer a lawsuit against CBS, Showtime Networks and Sacha Baron Cohen (pictured) from Washington DC to New York on Wednesday

In the show segment, Moore – who lost a December 2017 special election in his state to Doug Jones – appears with Cohen, 47, heavily made-up to disguise himself as a different character.

The comedy show features Moore, 71, in a prank where a ‘sex offender detector’ only beeps when placed over the judge but not on the interviewer, played by Cohen.

Moore had previously been accused of sex offenses against minors before his interview with the made-up Israeli Mossad operative character of Erran Morad.

Moore claimed this week that the contract he signed regarding his appearance is void because the Yerushalayim TV network he was led to believe he was filming with on February 14, is a ‘made-up’ company.

The show-makers did incorporate the company in Wyoming however.

‘There are at least two primary misrepresentations at issue,’ Deadline reports the new filing states. ‘The first misrepresentation was that Judge Moore was being flown to Washington DC to receive an award for his support of Israel, when in actuality it was so that he could be falsely portrayed as a pedophile on national television.

‘The second misrepresentation was that the television segment was being produced by Yerushalayim TV, and not Defendant Cohen, Showtime, and CBS.’

Lawyer Larry Klayman’s document continues that the defendants have no leg to stand on with their motion to transfer to Manhattan, where Showtime and CBS is based.

On October 23, the three defendants challenged the legal action and requested a venue change to the Southern District of New York where a consent form Moore signed recognized any legal action should be focused. 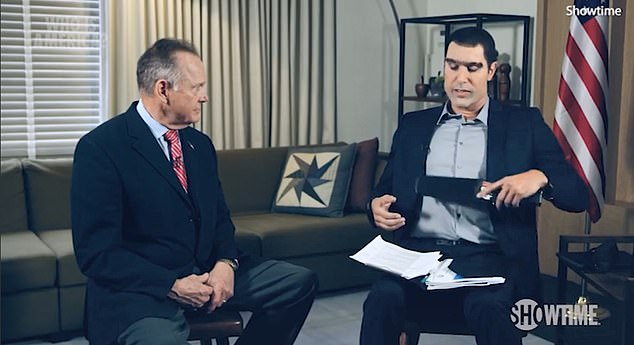 Moore claims they got him on Who Is America? in February to portray him as a pedophile 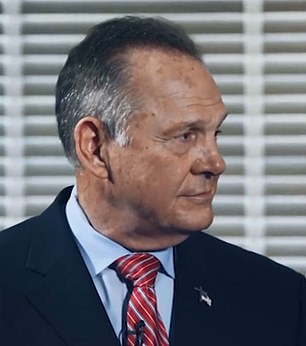 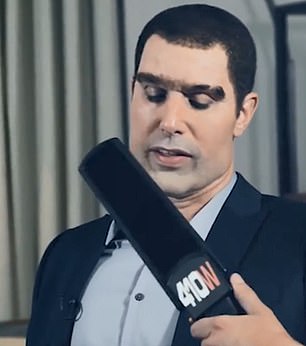 ‘Holding otherwise contravenes not only well established contract common law, but also the notions of justice and fundamental fairness.’

Klayman claims that the three defendants only wish to move the case to New York because they hope it would work in their favor.

The lawyer wrote that the state may be more likely to have a judge that would side to them rather than the politician.

‘Defendants’ motion is purely tactical, as they clearly perceive New York to a more favorable forum, where they will more than likely find a favorable left-leaning, pro-entertainment industry judge to rule in their favor,’ Kayman stated.

He is also representing ex-Arizona sheriff Joe Arpaio in a $300million lawsuit against CNN. 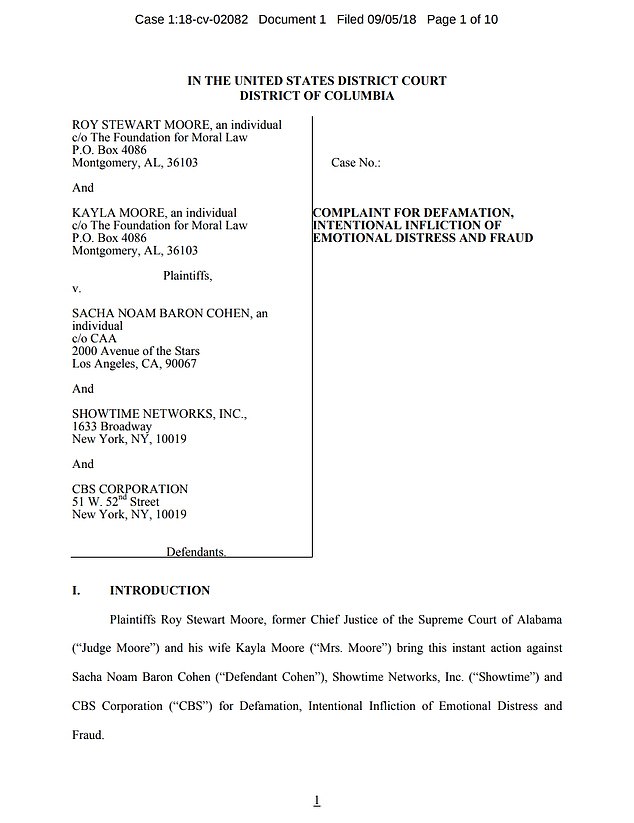 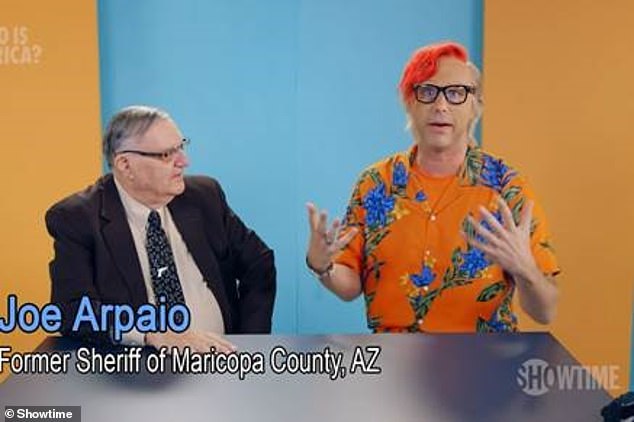 Controversial: Baron Cohen was a surprise Golden Globes nominee for his provocative network show which embarrassed US politicians by duping them with a fake persona

The filing from the plaintiffs – which include the Alabama politician’s wife Kayla Moore who was in the room when Moore signed the agreement – comes after Alaska politician Sarah Palin labeled him ‘sick’ and ‘evil’ on Good Morning America.

Palin stormed out of the interview last November when Cohen claimed Chelsea Clinton had undergone a ‘government funded sex change’. Her segment was cut from the show’s finale after much publicity about it.

Presenting himself as a veteran named Billy Ruddick, Palin took issue because she believed he presented himself as disabled.

Showtime denied he represented himself as having served in the US military or as a wheelchair user during the show booking process.

Palin argued: ‘They all lied about their names, their backgrounds and their contact information. This same team separated me from my daughter and my phone for this “interview”.’

But Cohen recently invited Palin to be his guest to the Golden Globes on January 6, after he was nominated for Best Actor In A TV Series, Comedy. 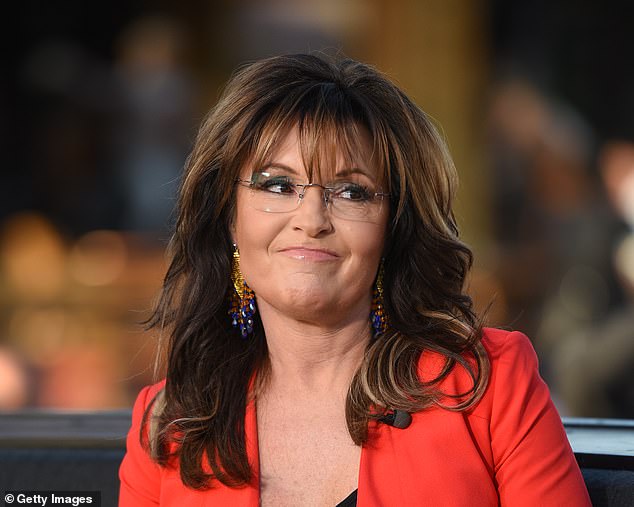 Ready for Hollywood? ‘Ms Palin, despite being cut from the show, I hope you will accept my invitation to be my date for the ceremony,’ said Cohen, in a statement 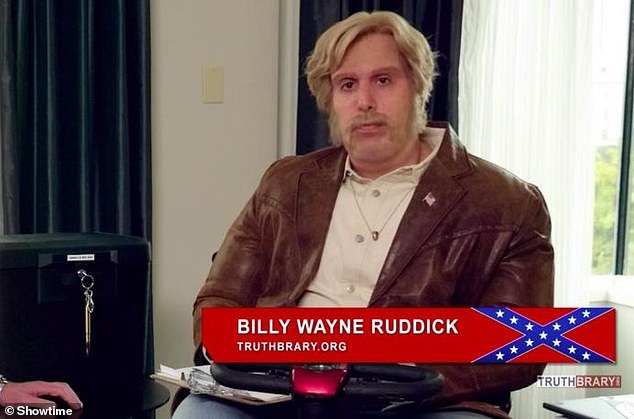 Cut: The former Alaska governor accused Baron Cohen of ‘heavily disguising himself’ as a disabled US veteran in a wheelchair, in character as Billy Wayne Ruddick

Thanking the Hollywood Foreign Press for his nomination, he added the invite to the former Vice President hopeful, who has previously .

‘Ms Palin, despite being cut from the show, I hope you will accept my invitation to be my date for the ceremony,’ said Baron Cohen, in a statement given to Deadline.

He added: ‘I appreciate the Hollywood Foreign Press for recognizing me, which luckily is something that none of the guests on the show did. This is such a special honor for me as the HFPA are always among the first to really appreciate my ever evolving humor. ‘

The British funnyman added a dig to Moore in the statement.

He  continued: ‘I am humbled to be recognized among such a wonderful group of nominees, all of whom I admire,’ Cohen said. This show was a labor of love for over two years. It is a shame they overlooked the amazing performances by the rest of the cast, particularly Dick Cheney and Roy Moore.’