Across the legislature, Supreme Court and elections, June was a packed month for politics. Bombshell testimony from the Jan. 6 committee looked to connect former President Trump with the attack on the Capitol. The Supreme Court issued major decisions on abortion, gun rights and religious freedom. Millions went to the polls in primaries for midterm elections that will determine control of the House and Senate.

June 2022 will be remembered for its unprecedented change and social upheaval. The constitutional right to an abortion, in effect for nearly fifty years, was overturned. For the first time in nearly thirty years, Congress passed reforms on gun ownership, while simulateously the Supreme Court overturned gun restrictions. 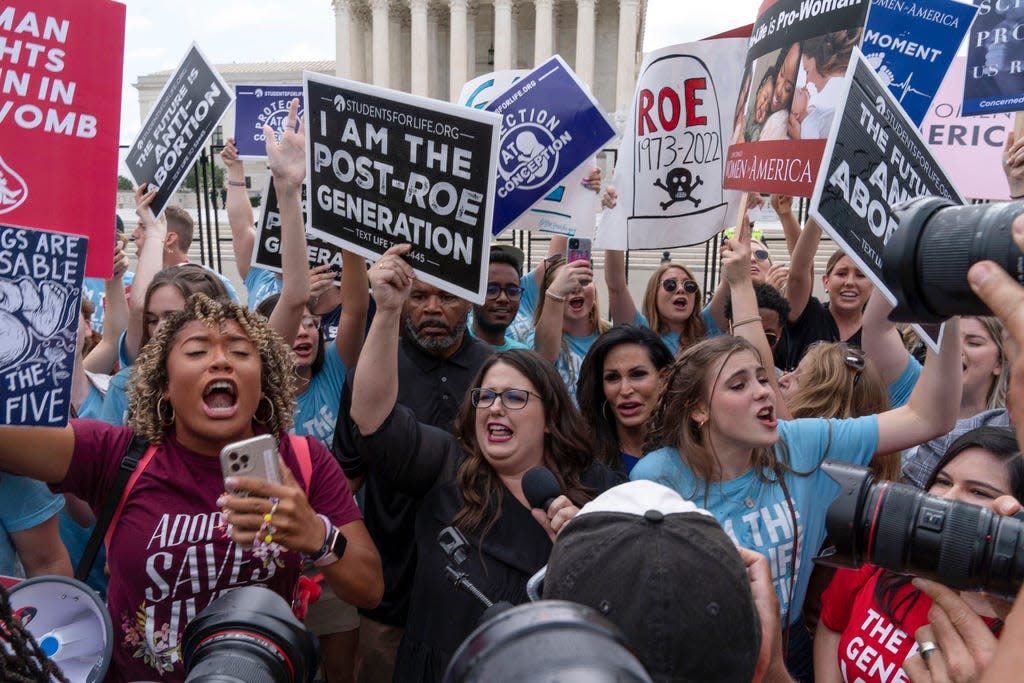 The end of Roe v. Wade leads to state laws and nationwide protests

The outcome had already been leaked, but it was a decision that nevertheless shocked Americans.

In a 5-4 decision on Friday, the Supreme Court voted to overturn Roe v. Wade, knocking down fifty years of a constitutional right to an abortion to any American.

Now with abortion in states’ hands, a web of laws limit where, when and under what circumstances someone may receive an abortion.

For anti-abortion advocates, this was an outcome they’d waited decades for. Now their advocacy work moves to states, working to enact restrictions in state legislatures. Ten states already had trigger laws on the books that automatically outlawed abortion with the end of Roe. A dozen other states are poised to restrict or outright ban abortions through this summer and the end of the year.

Across the nation, protestors decried the ruling as unconstitutional. Activists promised to keep fighting by donating to abortion funds and assisting people over state lines to procure abortions in states where it remains legal. 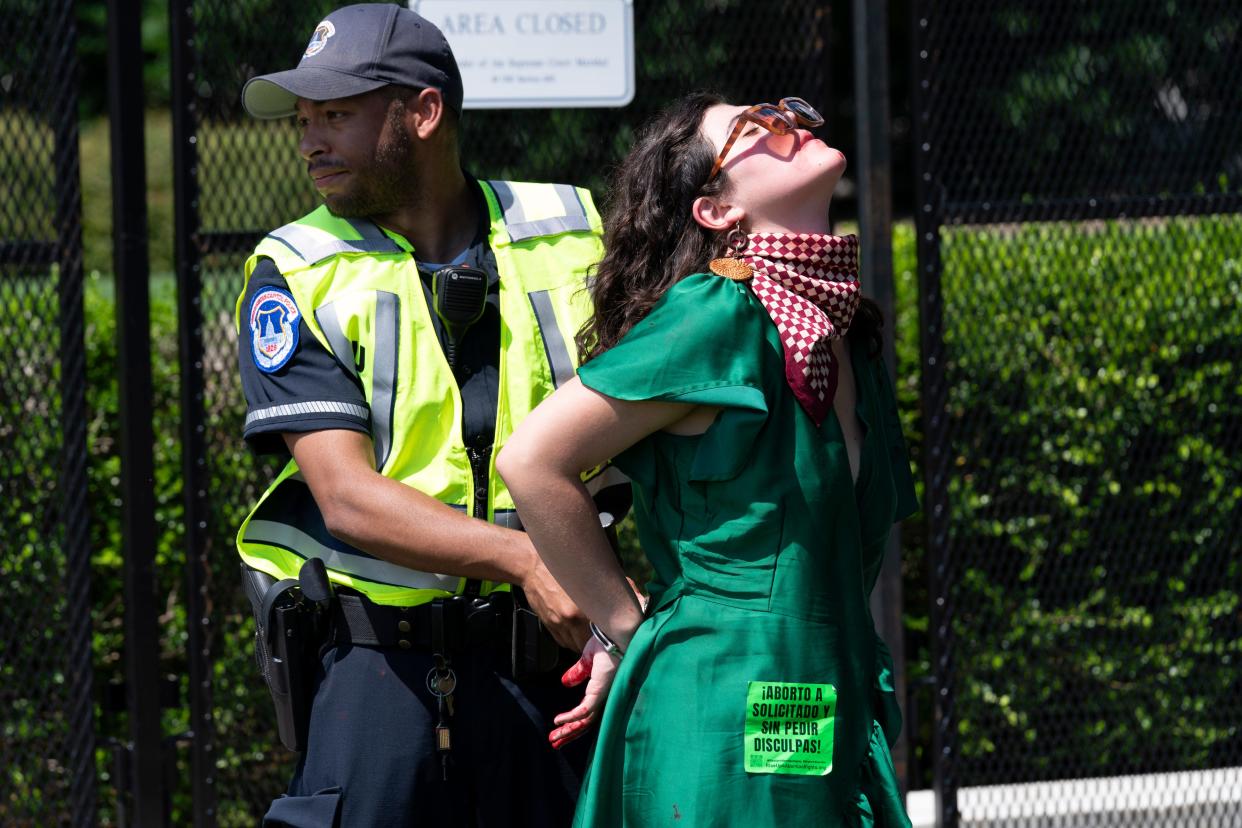 After Roe: ‘This is not over’: Harris warns Supreme Court may target gay marriage, contraception next

Roe was the highest-profile Supreme Court decision in years, but other rulings published in June will have ripple effects on Americans’ lives.

The court took aim at separation of church and state in a 6-3 decision over religious freedom. Former high school football coach Joseph Kennedy was fired for leading prayers on the field following games as the school district claimed it pressured players to take part.

The majority on the Court argued Kennedy’s 50-yard line prayers were a private matter and did not constitute the public school district enforcing Christianity.

The decision has implications for religious practices at schools and government establishments in the future.

The Supreme Court also struck down a New York state law that required residents to have “proper cause” to carry a handgun in public, such as self-protection.

The decision drew outcry from Biden and other Democrats who said increased access to guns will lead to more gun violence.

Over a decade ago, the Court ruled that individuals had the right under the Second Amendment to possess guns in their homes but left open whether or not the right extended outside someone’s front door.

In a 5-4 decision, the Court allowed the Biden administration to end a Trump-era policy that required Central American migrants seeking U.S. asylum to stay in Mexico while awaiting a decision.

Roberts said the policy “imposed a significant burden upon the executive’s ability to conduct diplomatic relations with Mexico,” as the U.S. must negotiate migrant returns with Mexican officials instead of unilaterally returning all Central American migrants across the southern border.

The ruling marks a key judicial win for the Biden administration.

In other SCOTUS news, Justice Stephen Breyer retired at the end of the month. He was appointed by President Bill Clinton and served 28 years on the nation’s highest court.

Breyer was immediately/ replaced by Judge Ketanji Brown Jackson, who was confirmed by the Senate in April. Jackson is the first Black woman to serve on the Supreme Court.

Along with providing more funding for school safety, mental health and state crisis intervention programs, the bill also takes steps to restrict gun access for those who could harm to themselves or others.

The bill encourages states to develop better “red flag” laws that would deny guns to people who are deemed to be dangerous by a court. It adds dating partners to the list of domestic abusers who are prohibited from buying firearms, eliminating the “boyfriend loophole.” The law also enhances background checks on those between the ages of 18 to 21.

This is the first major gun legislation passed by Congress in nearly thirty years, but Biden and some Democrats want to go further when it comes to gun reform, like re-banning assault style weapons.

More: Who are the 29 Republicans who voted in favor of the gun safety bill? And why?

A sophisticated, seven-part plan to overturn the election. An inner circle that knew election fraud claims weren’t true yet continued to pressure state officials. An outraged president who wanted to join rioters at the Capitol.

These are just a few of the revelations discovered over six hearings in June into the January 6 insurrection and former President Donald Trump.

After months of over 1,000 closed-door interviews and review of over 100,000 documents, the House Jan. 6 Committee went live with their findings this month.

Between surprise witnesses and bombshell evidence, the hearings felt made for television (they are, after all, produced by former ABC News president James Goldston). Ratings topped 20 million viewers for the first prime-time hearing.

The committee has looked at the pressure campaign Trump and his personal lawyers put on election administrators in swing states like Georgia and Arizona. Another hearing looked at how Justice Department officials found no evidence of election fraud and repeatedly told this to Trump and his staff, yet Trump ignored their findings and pressured them to make public statements in his favor. Another hearing explored how Vice President Mike Pence stood firm against private and public attacks from Trump to not certify election results.

The committee will continue its public hearings in July. Upcoming hearings will look at the role of extremist groups the Proud Boys and the Oathkeepers in organizing the riots. They’ve also obtained video footage from Alex Holder, a documentary filmmaker who conducted interviews with Trump, his family and his closest allies before, during and after Jan. 6.

More: Ketchup on the wall, scuffle at the wheel: Trump aide’s testimony lands like grenade at Jan. 6 hearing

Millions headed to the polls in midterm elections

June was arguably the peak of primary season, as voters in fifteen states headed to the polls to decide candidates for general elections in November.

Trump wasn’t on the ballot by name in Republican primaries and run-offs, but pro- and anti-Trump Republicans squared off in de facto referendums on the former president. In South Carolina, Reps. Nancy Mace and Tom Rice — both critical of Trump — faced primary challengers. Mace won her election after scaling back the anti-Trump rhetoric, filming an ad outside Trump Tower and telling voters she was one of his “earliest supporters in 2016.” Rice — one of ten Republicans to vote to impeach Trump over Jan. 6 — doubled down on the criticism in his campaign and lost his seat.

The November general elections will prove pivotal for Republican hopes in regaining control of the House and potentially Senate. Key states to look out for include Nevada, Arizona, Georgia and Pennsylvania.

What does it take to be first?: These states want to replace Iowa on the presidential calendar