‘I couldn’t let these mother f**kers win’: Defiant Jussie Smollett displays his swollen face as he plays to a crowd including Maxine Waters and Empire co-creator in first appearance after attack ‘by MAGA-shouting thugs’

Jussie Smollett has returned to the stage in front of a sold-out house in Los Angeles.

The Empire star sang on Saturday night at the Troubadour club in West Hollywood, appearing publicly for the first time since he reported to police in Chicago on Tuesday that two masked men attacked him and put a rope around his neck while using homophobic and racial slurs.

He was joined on the stage by his siblings, who introduced him and embraced him.

‘My family and I have realized that tonight is an important part of Jussie’s healing. You see, he’s been a fighter since he was a baby,’ his brother Joel Smollett Jr said.

Before singing a note, Jussie Smollett teared up as he told the crowd he’s not fully healed yet, but he will be, and his music will help him.

‘I couldn’t let the motherf**kers win,’ he said, to loud screams from the audience. ‘So I will always stand for love, I will never stand for anything other than that.’ 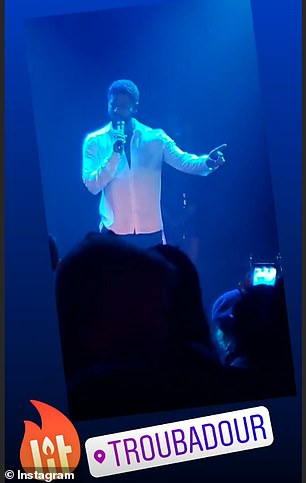 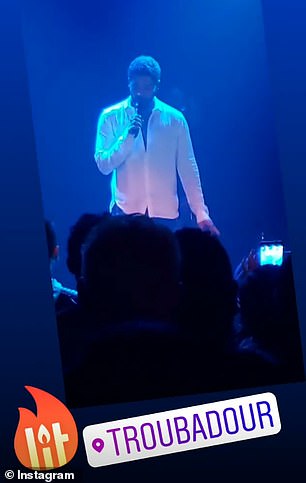 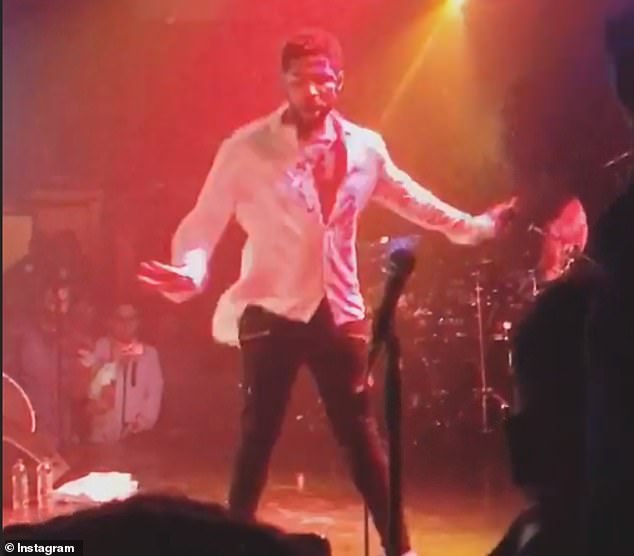 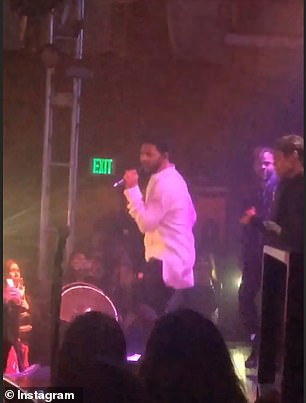 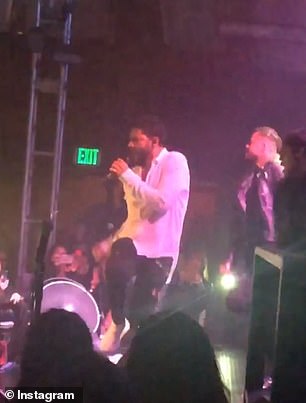 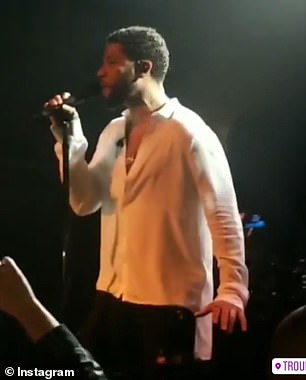 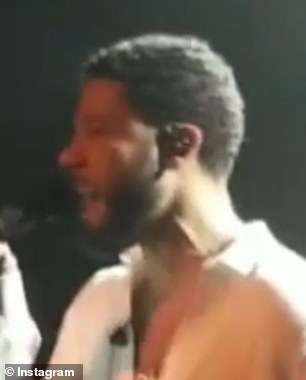 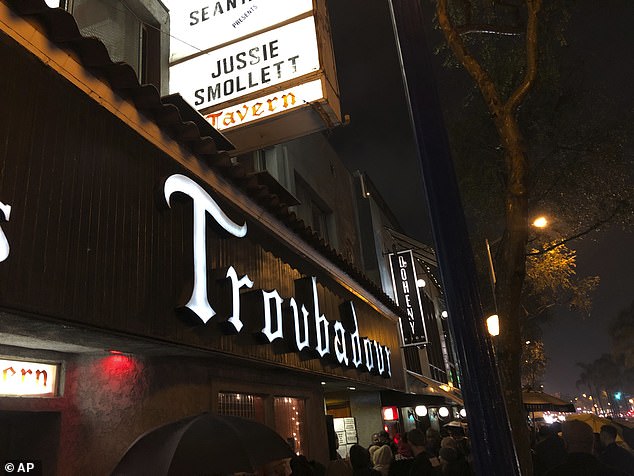 The Troubadour headlines singer and actor Jussie Smollett on its marquee who performed in concert on Saturday in West Hollywood, California 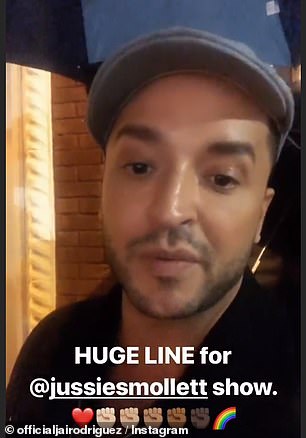 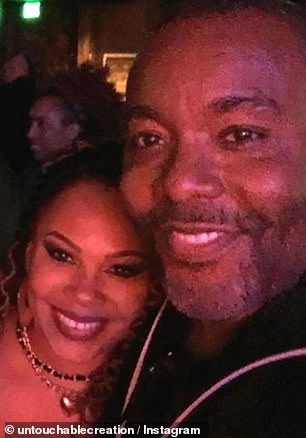 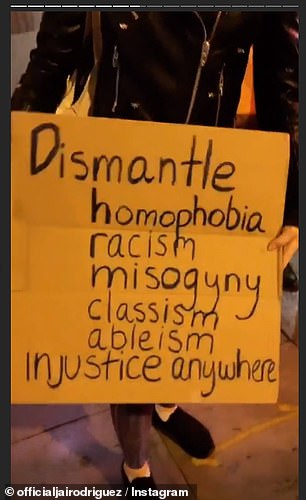 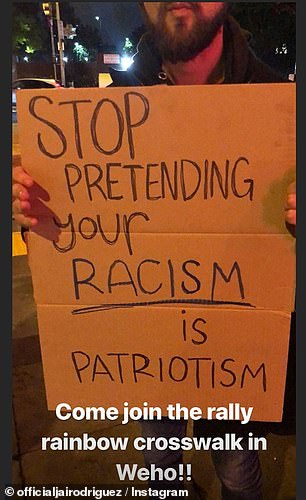 During the performance, Smollett thanked his boyfriend for supporting him over the past four days, and sang as song he wrote for the boyfriend called Haha (I Love You).

During the set, Smollett said he fought back against his attackers, and called himself the ‘gay Tupac,’ referring to the rapper who was gunned down in 1996.

Smollett said that his ribs had been bruised, but not broken as TMZ had previously reported. 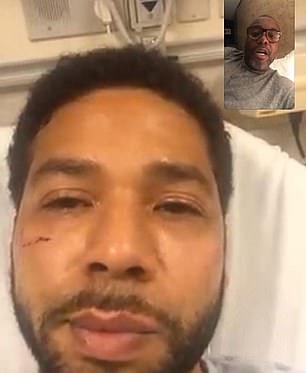 Jussie Smollett, pictured in the hospital hours after the attack on Tuesday, has returned to the stage in Los Angeles

Earlier Saturday, cameras captured Smollett in Los Angeles as his brother loaded bags in a car and then drove away, with Smollett covering his face in the passenger seat.

It comes just days after he reported being attacked in Chicago on Tuesday as he walked home from a Subway restaurant.

The actor, who is gay and black, said he was punched, had bleach poured on him and had noose put around his neck.

Moments later, he was filmed walking into his building with a rope hanging loosely around his neck. 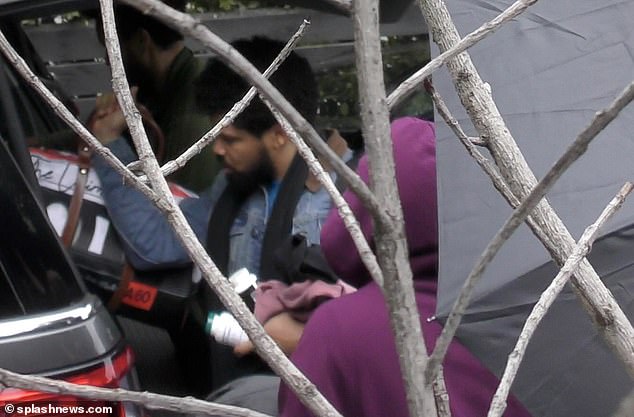 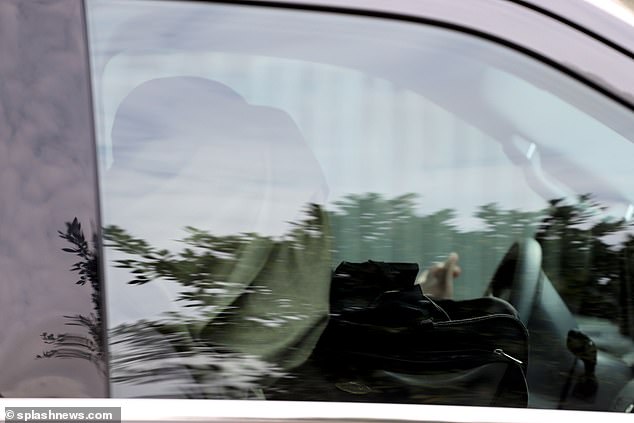 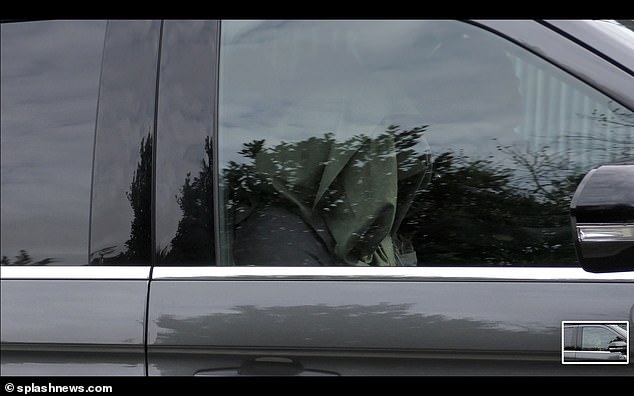 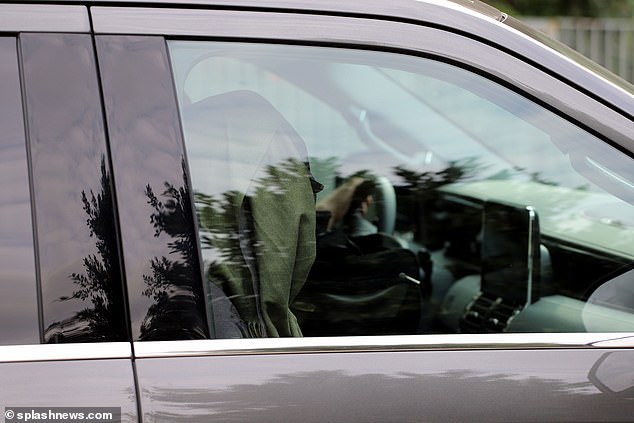 On Friday, Smollett broke his silence to thank fans for the outpouring of support he has received since the alleged attack.

The Empire star told Essence in a statement: ‘Let me start by saying that I’m OK.

‘My body is strong but my soul is stronger. More importantly I want to say thank you.

‘The outpouring of love and support from my village has meant more than I will ever be able to truly put into words.’

He added that while he was ‘frustrated’ with ‘certain inaccuracies and misrepresentations’ about the case, he believes ‘justice will be served.’

‘I am working with authorities and have been 100% factual and consistent on every level. Despite my frustrations and deep concern with certain inaccuracies and misrepresentations that have been spread, I still believe that justice will be served.

‘As my family stated, these types of cowardly attacks are happening to my sisters, brothers and non-gender conforming siblings daily.

‘I am not and should not be looked upon as an isolated incident.

‘We will talk soon and I will address all details of this horrific incident, but I need a moment to process.’ 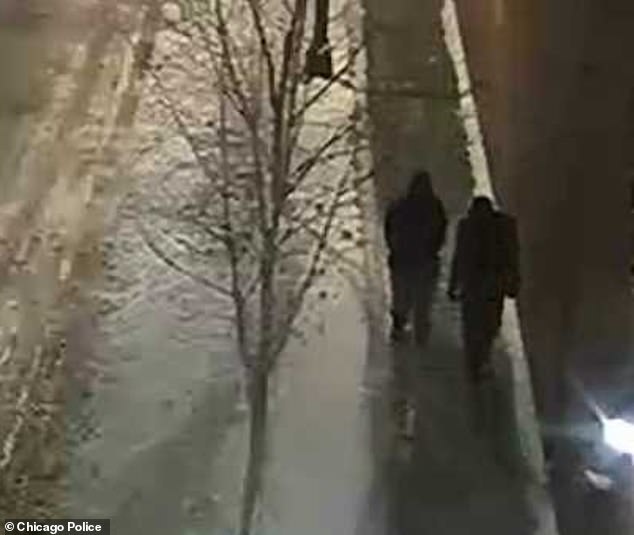 ‘Photos (pictured) of people of interest who were in area of the alleged assault & battery of Empire cast member,’ police spokesman Anthony Guglielmi tweeted Wednesday evening

‘Most importantly, during times of trauma, grief and pain, there is still a responsibility to lead with love. It’s all I know. And that can’t be kicked out of me.

‘With Love, respect & honor…Jussie,’ he said.

It is the first time he has spoken since being targeted in downtown Chicago by two men who he said shouted ‘this is MAGA country!’ and attacked him as he walked home.

Let me start by saying that I’m OK.

My body is strong but my soul is stronger. More importantly I want to say thank you. The outpouring of love and support from my village has meant more than I will ever be able to truly put into words.

I am working with authorities and have been 100% factual and consistent on every level. Despite my frustrations and deep concern with certain inaccuracies and misrepresentations that have been spread, I still believe that justice will be served. ‘

As my family stated, these types of cowardly attacks are happening to my sisters, brothers and non-gender conforming siblings daily. I am not and should not be looked upon as an isolated incident. We will talk soon and I will address all details of this horrific incident, but I need a moment to process.

‘Most importantly, during times of trauma, grief and pain, there is still a responsibility to lead with love. It’s all I know. And that can’t be kicked out of me.

The reported attack was not captured on surveillance footage. Smollett was seen entering his apartment building moments after it happened with a rope around his neck.

He said he was on the phone to his manager, Brandon Z. Moore, when he was jumped and Moore corroborated his story earlier this week.

A week before the attack, Smollett reportedly received a homophobic and racist death threat in the mail.

It was sent to the studio where he films Empire and is said to have terrified staff.

Police are working to find two men they believe may be responsible and are appealing to the public for information.

One had a rope hanging out of his sweatshirt, she said, and they looked out of place. She said the were wearing ‘grey hunting socks.’

Smollett had not long arrived back in Chicago from New York City when he was attacked.

His flight was delayed by several hours leaving and he documented his frustration about the late arrival on Instagram before he got home.

He was filmed on surveillance cameras leaving the Subway at around 2am and walking towards the apartment.

Police on Thursday confirmed that he was filmed on the same street as the two persons of interest whose images have been released at one point during his journey home.

The 36-year-old actor was walking down the street and the two men were sitting on a bench facing opposite him. 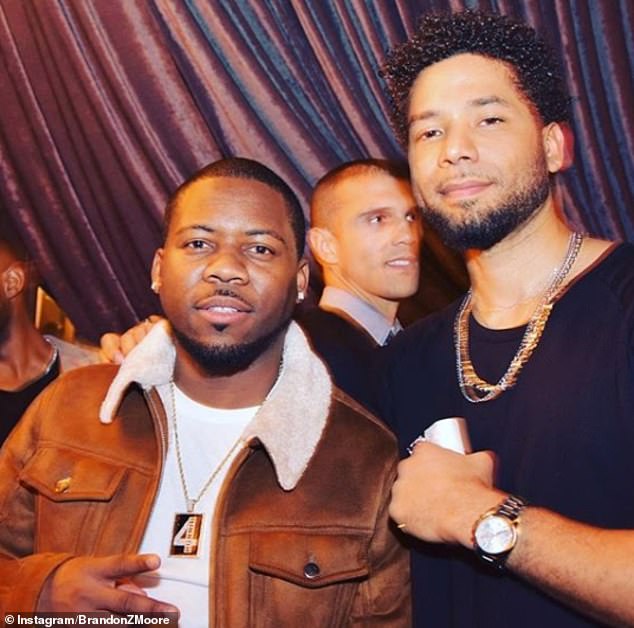 Smollett and his manager Brandon Z. Moore both told police they were on the phone when the attack happened. Moore said he heard the attackers yell ‘this is MAGA country’. It is not clear if he is the person who called 911 or if it was someone else but Smollett refused to hand over his phone when police asked for it to verify that they had been on the phone 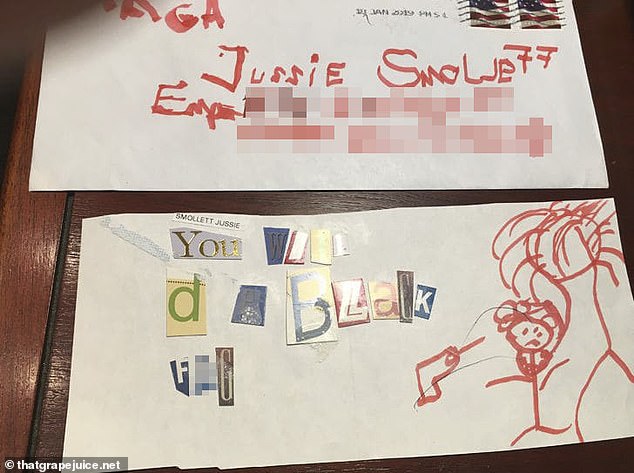 The attacks are believed to be premeditated as Smollett received a cut out letter, that appears to be dated from January 18, stating that ‘You will die black f*g’. Fox Studio received the letter on the 22nd and cops said it was laced with powder Tylenol 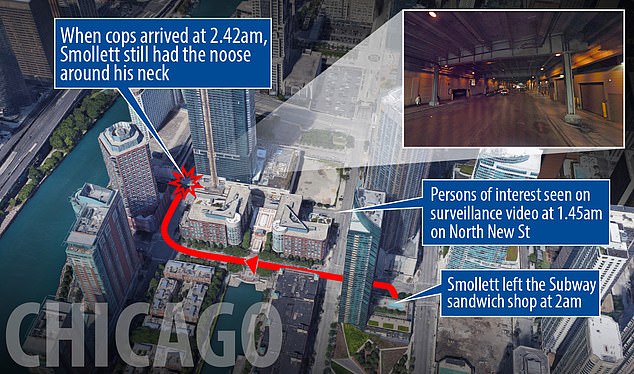 The photos show two men walking on North New Street (depicted above) near East Illinois Street around 1.45am on Tuesday. Smollett told police that he was walking alone down East North Water Street in the 300-block around 2am when the two men approached him

They got up and walked away and all three walked out of the cameras’ view.

Smollett was picked back up by a different camera 60 seconds later as he entered his apartment building.

He had the rope around his neck and there was salt on the front of his sweatshirt from the ground.

At 2.35am, an associate of the actor’s called 911 and officers arrived at an apartment where he was at 2.42am.

It is not clear if it was his apartment that they went to or his friend’s.

After giving his statement, Smollett took himself to hospital where he was treated for lacerations to the face. 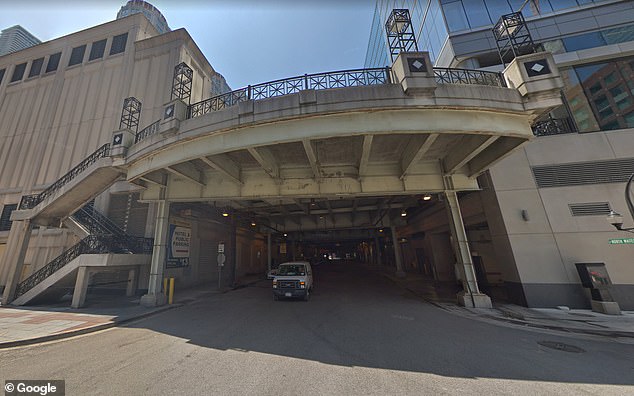 The attack took place here, in the street, outside the apartment building where Smollett stays while he is in Chicago filming. It is in between two luxury apartment buildings and two hotels but police say they have not yet recovered surveillance footage of it 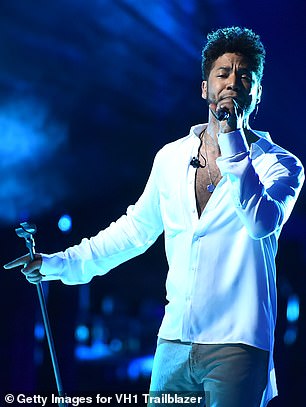 Smollett, 36, who is also a singer, is due to perform on Saturday night in Los Angeles

Police had asked him to turn over his phone for them to verify that he had been on a call with his manager, as both claimed, when the incident happened but he refused, saying he was uncomfortable doing so.

Chicago Police Department spokesman Anthony Gugliemi told DailyMail.com on Thursday that it was not suspicious for him to have refused doing so and that he may have been concerned with privacy.

He has been entirely cooperative otherwise, he said.

The attack has enraged the country and caught the attention of the president who deemed it ‘horrible’ on Thursday.

‘That’s horrible….there is nothing worse, as far as I am concerned,’ Trump said on when asked about the incident.

Smollett’s famous family released a statement abhorring the attack, and countless celebrities, including his Empire co-stars, have also spoken out to support him.

He is due to perform a show in Los Angeles on Saturday night.