MPs opposed to a No Deal split from the European Union on October 31 must now unite behind a single Brexit position if they are to wrestle control away from Boris Johnson, Ken Clarke said today.

The Tory former chancellor said the time had now come for MPs who oppose the Prime Minister’s ‘do or die’ strategy to decide once and for all where they stand on Brexit.

Mr Clarke suggested MPs must choose between uniting behind delivering a soft Brexit and holding a second referendum in the hope that the 2016 Leave vote is overturned.

The so-called ‘Remain Alliance’ has been riven with divisions for months with the Labour Party technically still in favour of delivering Brexit while other groups, including the Lib Dems, want the UK to stay in the EU.

There are further divisions over the circumstances in which a second referendum should be called and what should be on the ballot paper.

But Mr Clarke suggested today that Mr Johnson’s decision to suspend Parliament for five weeks and reduce the amount of time available for MPs to try to block a No Deal divorce means the different factions must now unite behind a single position.

A meeting of opposition leaders convened by Jeremy Corbyn earlier this week agreed a plan to try to pass a law which would force the PM to seek a Brexit delay from the EU if no agreement is in place by Halloween but no rebel Tories were present at that meeting.

Sources told MailOnline this morning that a new meeting including senior Tory Europhile MPs is now likely to be convened in the coming days in a bid to formulate a stop No Deal plan which has the support of MPs on both sides of the Commons.

Mr Johnson has committed to delivering Brexit by October 31 with or without a deal. 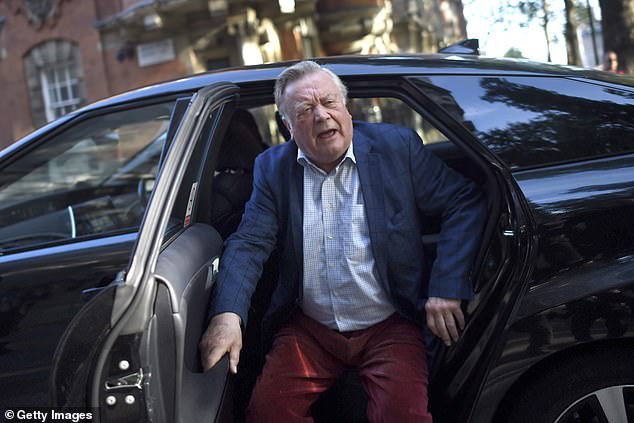 Parliament is due to be prorogued at some point in the week beginning September 9 until October 14 when a new Queen’s Speech will be held.

Mr Clarke, who as the longest serving male MP is the Father of the House of Commons, suggested this morning that Mr Johnson’s decision to push the nuclear button should prompt warring factions to come together.

He told the BBC: ‘It should have the effect of getting the majority of the House of Commons who think a No Deal Brexit would be a calamity, actually get together to agree some compromises between themselves, actually decide firmly what they are going to provide a majority to do and I hope they do it in legislation.

‘I hope that we get the time actually to pass that legislation properly.’

He added: ‘There has never been a majority in favour of leaving with No Deal. It has been voted on several times.

‘What we have to decide, what has been dividing the various groups, is are we in favour of a soft Brexit where we do leave, accept that the best compromise is to leave the EU political institutions but keep all of our economic ties intact – business, exports and so on, not to take a hit to our living standards – or do we actually just go for a second referendum in the belief that it will reverse the whole thing?

‘You can combine the two and so on. I personally think the only way of healing these political divisions in the short term is to go for a soft Brexit but you might put that deal to a referendum.’

Mr Clarke’s comments represent a significant intervention given the fact he has been touted as the potential leader of a caretaker government should Mr Johnson be toppled in a vote of no confidence.

However, the likelihood of MPs agreeing to a united Brexit stance appears unlikely.

The Lib Dems, SNP, Greens and Plaid Cymru would all back the UK staying in the EU.

But adopting such a position would be politically difficult for Mr Corbyn’s Labour Party given many of its strongholds in the north of England voted to quit the bloc.

Labour has committed to delivering Brexit but would hold a second referendum in certain circumstances.

It has not said it would campaign to Remain in all circumstances.

One opposition source said they believed the priority needed to be stopping No Deal with a discussion about a united Brexit stance saved for a later date.

The source said a new meeting, one including Tory Europhile MPs, was likely to take place in the coming days before Parliament returns next week.

‘When everyone met with Jeremy Corbyn this week there were no Tories in the room,’ they said.

‘What we need to do now is have a meeting with opposition leaders and the leading backbench Tories.’