Many shops and small businesses in Kochi, Kerala’s commercial capital, were closed on Thursday, bus services were halted and taxis refused to take passengers.

Women and girls aged between 10 and 50 – those considered to be of menstruating age – have been legally allowed to enter the Sabarimala temple since September, after India’s supreme court overturned a previous ban on them going in.

But the temple is refusing to abide by the court’s ruling, and thousands of devotees have been trying to stop women gaining access.

They believe that women’s presence inside the temple would disrespect the celibate deity Ayyappa.

Early on Wednesday, however, two women aged 42 and 44 were escorted into the temple by police without being spotted by protesters.

They offered prayers at the top of a staircase from where they could see the deity, but without drawing the attention of the priest or other devotees, a police official said.

In addition, millions of women formed a 385-mile long “wall” in protest against the temple’s refusal to let women in. 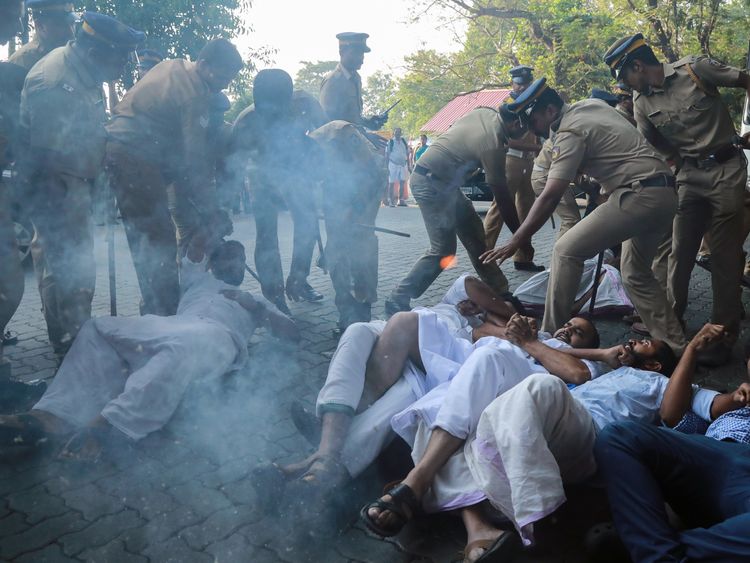 Protests began soon after it emerged the women had been in the temple. A woman police constable was attacked and molested by five protesters, officers said, while a protester was pelted with stones.

“We arrested more than 600 people on Wednesday from Kochi and four other adjoining districts and took nearly 300 into preventive custody,” Inspector General Vijay Sakhare said.

“Some protesters may turn violent such as stone-throwing or blocking roads and we are armed with riot gear and have tear gas and water cannons,” he added.

A 55-year-old passer-by who was seriously injured after rocks were thrown by protesters died later on Wednesday, the Press Trust of India reported.

Kerala’s state government – run by left-wing parties – has sought to get women access to the temple.

Some people believe that banning women from entering is incompatible with a modern way of life.