Hanoi: US President Donald Trump and Kim Jong-un have shaken hands again in front of the world's cameras before a second summit that will seek to break a deadlock in denuclearisation talks.

"But here we are today, I hope we can make fruitful achievements… and that gives me a hope that we will be successful this time," Kim said. 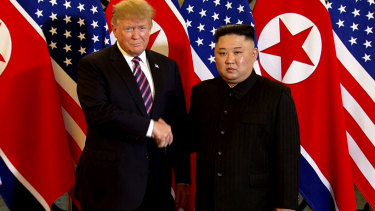 Mr Trump replied that the first summit was "very successful" and downplayed critics. "I hope this one will be equal or greater than the first…The biggest progress is our relationship," he said.

"I think you will have a tremendous future with your country – a great leader. And I look forward to watching it happen, and helping it to happen," Mr Trump said.

Mr Trump prides himself on his deal-making skills, and met one-on-one with Kim for 20 minutes on Wednesday evening, before a dinner where they were joined by a small circle of aides.

But the negotiations start in earnest on Thursday with multiple meetings scheduled and Mr Trump promising a press conference at the end.

"I think it will be very successful," Mr Trump said when the two men walked onto a stage decked with North Korean and US flags, looking solemn to make the photo-op first handshake. Kim appeared nervous.

Director of the Korea Centre, Jean Lee, said Kim's comments about the "agonising efforts" showed he, too, was under pressure to produce results at the Hanoi summit. She said his country was at stake. 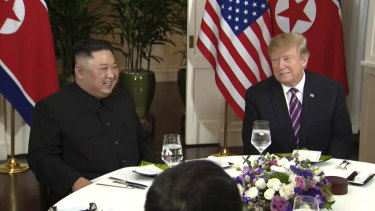 The two leaders have dinner before talks begin.Credit:Host Broadcast

Dongguk University Professor Koh Yu-hwan said it was time for Kim and Mr Trump to “walk the talk” at their second summit.

President of the Sejong Institute Paik Hak-soon said: “There can’t be a small deal. Both countries have remained foes for several decades so they can’t come to a simple solution in two talks.”
But Paik said the pressure is on for the Hanoi summit to show the details – how many steps will denuclearisation take and what are those steps?

To break the deadlock that had developed between the US and North Korean negotiators since the Singapore summit the US is believed to have softened its insistence on North Korea completely denuclearising before any concessions are offered.

Paik said an offer by North Korea to dismantle Yongbyon “the heart of North Korea’s nuclear program” was a big offer – but the US would need to reciprocate with concessions. 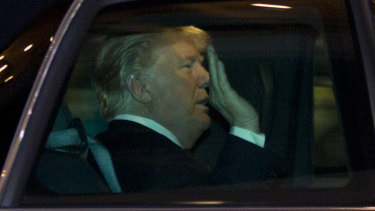 Donald Trump arrives at the summit.Credit:AP

“There was broad agreement in the first summit. Now there should be concrete items. We need a roadmap and a timeline,” he said.

Paik raised the possibility that Kim may surprise the US with an even bigger concession – putting Inter Continental Ballistic Missiles on the table with an offer to start negotiations to get rid of them.

He said Kim would be eager to make progress on key issues while Trump is in office – because the next US election could bring a change in US policy.

Professor Koh said although there was a track record of North Korea backtracking on pledges to denuclearise, he believed Kim’s actions over the past 12 months are different to his father’s.

“This time is different from the past … they are taking actions first. They suspended missile tests and destroyed a testing facility,” he said.

Kim had publicly announced a change in policy to the North Korean people that economic development would be the priority of his government, and the nuclear program had been completed.