A 43-year-old woman accused of the stabbing murder of a man on King Street in Melbourne’s CBD has fronted court as homicide squad detectives hunt a second man over the bloody brawl.

Candice Harper appeared in Melbourne Magistrates Court via a phone link on Monday charged with the alleged murder of a 46-year-old Carlton man Ricky Rowlands following a brawl near a city hotel, about 9.40pm on Saturday. 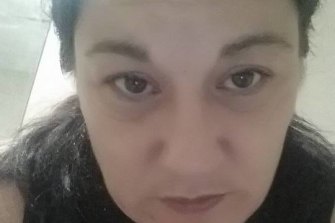 The court heard it was Ms Harper’s first time in custody and she was “withdrawing” from a substance.

The 43-year-old has been charged with the alleged murder of Mr Rowlands, who died in hospital on Sunday, and affray.

During the brief hearing she yelled over the phone: “You know I’ve got a child out there and an injured partner.”

Ms Harper was remanded in custody to reappear on February 15. 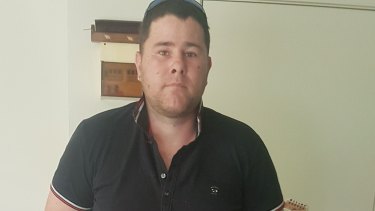 Meanwhile, detectives are hunting 40-year-old Benjamin McCartin, who is wanted for questioning over the fatal brawl.

"Police have a number of follow-up inquiries to make in relation to another man who is believed to be involved and remains outstanding," a police spokeswoman said.

A third man – a 42-year-old from Melbourne – is fighting for life in hospital after being found at the bottom of a fire escape with critical injuries hours after the brawl. 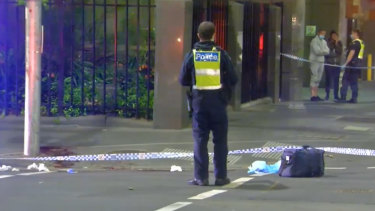 A man has died in hospital after allegedly being stabbed in Melbourne’s CBD on Saturday night, with police investigating whether the attack is linked to another incident early on Sunday morning. Credit:Nine News

At 3am on Sunday emergency services were called to treat a man found at the base of a fire escape at a King Street hotel.

Police were told the injured man had fallen, but the spokeswoman said detectives were investigating if his injuries were linked to the stabbing.

Mobile phone footage of the aftermath of Saturday's brawl showed a blood-soaked footpath near the intersection of King and Bourke streets as bystanders rushed to assist the injured man. 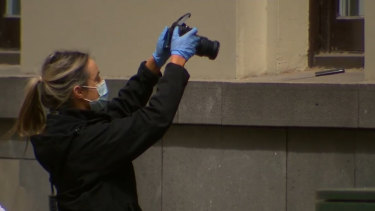 Police photograph a knife at the scene of the CBD incident.Credit:Nine News

When one man yells "Is he alright?", a woman leaning over the injured man replies "nah".

Hours later forensic officers were seen removing a number of knives from the nearby area while officers from the Critical Incident Response Team combed the city streets.