He really does have nine lives! Woody the kitten who cheated death by a whisker when ‘thug STABBED him in the stomach and left him needing his tail and toe amputating’ is crowned Britain’s top pet survivor

A family cat who was stabbed in the stomach and had part of his tail cut off allegedly by a thug has won a pet award for making a full recovery.

Little kitten Woody, aged just five months, was mutilated after he went missing for hours outside the family home in Battle, East Sussex.

Owner Stephanie Wood saw her pet return through the living room window and sit quietly on the sofa, only for her to notice that she could see her cat’s insides. 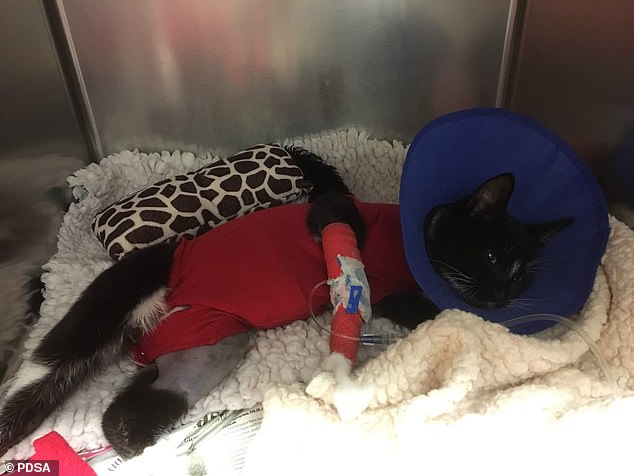 The family had feared that their new pet wouldn’t make it. Little kitten Woody, aged just five months, was mutilated after he went missing for hours outside the family home in Battle, East Sussex

She noticed the deep slash on his tummy and that his tail had been severed off and then cauterised with a substance.

Beloved pet Woody, who joined the Wood family last year, was rushed to the vet for lifesaving surgery.

The kitten is a companion to mother Ms Wood and to her son, who has autism. 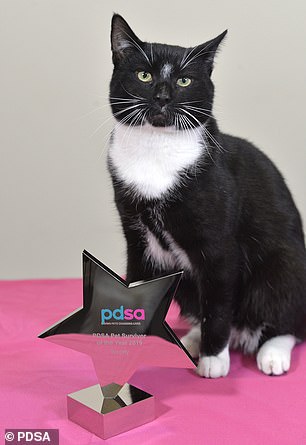 The family feared that their new pet wouldn’t make it, and his tail injury meant there was a risk that he could even be left paralysed.

He needed over three hours of emergency surgery at Sussex Coast Vets, near Hastings, to stitch up his stomach and amputate the remainder of his tail.

The vets also had to remove a toe due to a paw wound. He stayed at the vet for eight days receiving intensive care before he was able to go home.

He was kept in a cage to rest for three weeks and had to wear a special medical jacket to protect his wounds.

But the pet got an infection despite owner Ms Wood applying cream several times a day. He then had to go in for more operations but the pet made a full recovery.

The family still do not know what caused Woody’s injuries, despite police recording the case as animal mutilation.

There is a possibility that Woody’s injuries were deliberately inflicted by a person since Woody’s abdominal injury seemed to have been caused by being stabbed with something sharp.

Ms Wood said: ‘We reported it to police and they investigated this as a case of animal mutilation.

‘A neighbour said they’d heard a disturbance and a noise like an animal in distress in the field behind his house ten minutes before Woody appeared home.

‘We’d heard of other cats in the area having similar wounds, it was awful to think someone might’ve done this deliberately.’

But without further information or evidence the case remained unsolved and had to be closed.

The family may never know what happened to Woody, but they are just glad he made a full recovery.

But Woody’s vet bills had reached around £5,000, which owner Ms Wood had borrowed and crowdfunded to cover the cost.

The brave kitten has been awarded Pet Survivor of the Year 2019 for his ordeal by vet charity PDSA after a public vote. 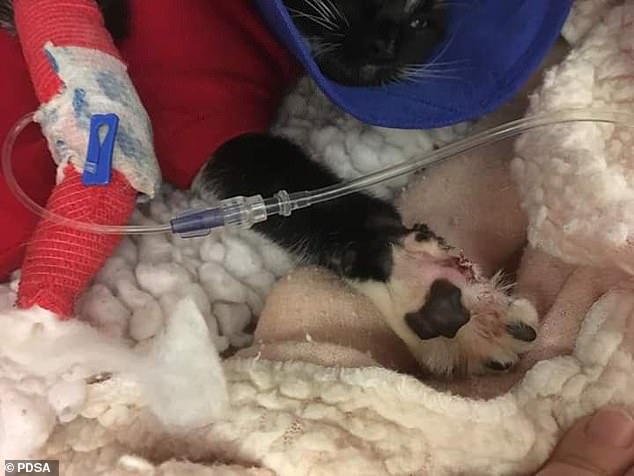 Beloved pet Woody, who joined the Wood family last year, was rushed to the vet for lifesaving surgery. His paw is pictured above. The kitten is a companion to mother Ms Wood and to her son, who has autism

Ms Wood said: ‘It’s been a tough year for Woody and the whole family, but it’s ended on a high by winning this award.

‘Thankfully the experience hasn’t changed his personality – he’s such a friendly little cat, and will do anything for a cuddle or a treat! We couldn’t imagine life without him.

‘Thanks so much to the team at Sussex Coast Vets, to PDSA for recognising our miracle kitten, and to everyone who donated towards his care and voted for him to win.’

PDSA Vet Nurse Louise Chapman, who presented Woody with his trophy and prize, said: ‘Woody suffered very severe injuries and it was touch and go whether he would survive.

‘But thanks to the skill of his vets and round-the-clock care from his family during months of recovery and rehabilitation, Woody pulled through. He’s a true pet survivor and a worthy winner indeed.’

Other award winners include a mother duck who survived a suspected fox attack that left her throat ripped open, and Custo the cockerchon dog who needed five blood transfusions for his aggressive spleen cancer.