Kwasi Kwarteng was accused of ‘flip-flopping’ last night as he was set to perform a third U-turn in 24 hours over the date of his next mini-Budget.

It was originally pencilled in for November 23, but sources close to the Chancellor said on Monday that he would announce his plan to balance the books this month.

However, yesterday Mr Kwarteng told broadcasters he would wait until the original date – November 23 – before it emerged last night he would bring it forward after all. It was claimed the reason for the confusion is the convention of ministers officially announcing the change of date in Parliament first.

A Treasury source said: ‘If you change the date of a fiscal event, you do it to Parliament – always.’ It came as the Chancellor appeared to partly blame the Queen’s death for the market chaos caused by his tax cuts. Mr Kwarteng claimed the suspension of politics in the mourning period left no time to ‘roll the pitch’ and warn investors of his plan. 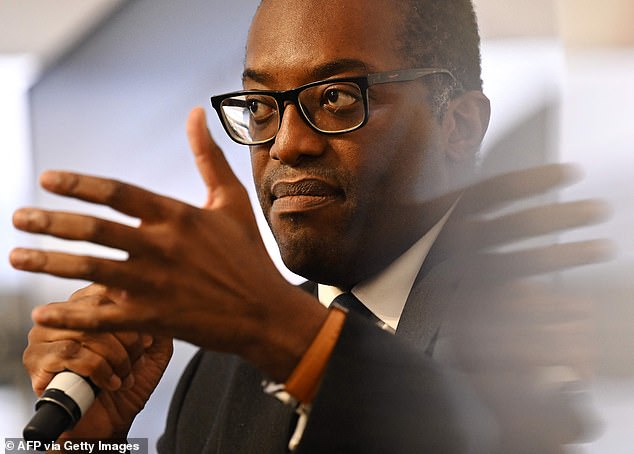 It was originally pencilled in for November 23, but sources close to the Chancellor, pictured, said on Monday that he would announce his plan to balance the books this month

He told GB News: ‘What was extraordinary about that month was that we had a new Government and also we had the sad passing of Her Majesty Queen Elizabeth II – so we had a nation in mourning. Then I think four days after the funeral we had the mini-Budget. It was a high-speed, high-pressure environment. We could… have prepared the pitch a bit better.’

Mr Kwarteng performed a humiliating about-turn on Monday when he was forced to ditch plans to scrap the top 45p rate of income tax paid by Britons earning over £150,000.

It then emerged that he was performing a second major change by bringing forward the date when he would publish his plan to balance the books alongside a full forecast from the Office for Budget Responsibility watchdog. Aides confirmed he planned to bring the announcement forward to this month. But the Chancellor told GB News he will keep the original date, saying: ‘It’s going to be the 23rd of November.’ Then last night it emerged the date would be brought forward after all.

Critics earlier suggested that he had performed a U-turn on a U-turn – and in the process invented an ‘O-turn’.

Susannah Streeter, an analyst at financial services firm Hargreaves Lansdown, said: ‘I think the markets have got so used to flip-flopping that it’s not coming as a surprise.’

But she added that the pledge to provide the OBR’s ‘reading of the economy’ had bolstered confidence.

The constant changing of the date will anger senior Tories, including Treasury select committee chairman Mel Stride, who had praised Mr Kwarteng on Monday night for ‘listening’, adding that laying out ‘firmly credible fiscal plans… could ease rate rises for millions’.

But the financial markets were unmoved by the chaotic communications, with one analyst saying they were ‘used to it’. Interest rates on Government debt fell close to the level of the day of the mini-Budget, and the pound hit a two-week high against the dollar of $1.14. 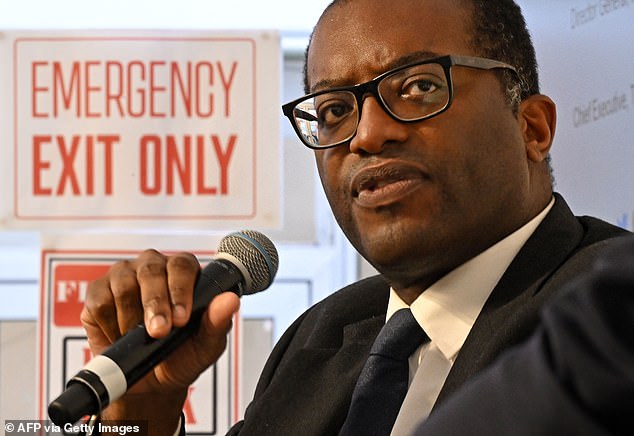 That made it one of the best-performing currencies against the dollar since September 22, the day before the mini-Budget, according to Bloomberg figures. Investors’ nerves were calmed by the Government’s pledge to publish the OBR forecast alongside the next fiscal update and reports the Treasury and the Bank of England are ‘working closely together’. The Chancellor and PM Liz Truss are battling to shore up their credibility after the humiliating U-turn on tax cuts for top earners and have sought to avoid further signs of weakness.

Meanwhile, Miss Truss yesterday refused to rule out lifting the state pension age, raising the prospect that millions of people will have to work longer. She said raising the retirement threshold is a ‘decision yet to be made’.

If the current review by the Department for Work and Pensions recommends an increase, it could save the Government billions of pounds and help balance the public finances.

On the issue, Miss Truss told Sky News: ‘You’re asking me to speculate about all kinds of decisions that haven’t yet been made,’ adding she will ‘do what it takes’ to fix the energy crisis, curb inflation and ‘get the economy growing’.