Putin throws MORE troops and tanks at Kyiv: Satellite images show THREE mile-long convoy heading towards capital after failing to take the city, as its mayor Klitschko warns ‘we are at the border of a humanitarian catastrophe’

The images released by Maxar Technologies showed a deployment comprised of hundreds of military vehicles and extending more than 3.25 miles (5 km).

The images released by Maxar – which has been tracking the buildup of Russian forces for weeks – could not be independently verified.

As Russian troops draw closer to the Ukrainian capital, Kyiv’s mayor is filled with pride over his citizens’ spirit but remains anxious about how long they can hold out.

After a gruelling night of Russian attacks on the outskirts of the city, mayor Vitali Klitschko was silent for several seconds when asked if there were plans to evacuate civilians if Russian troops managed to take Kyiv. 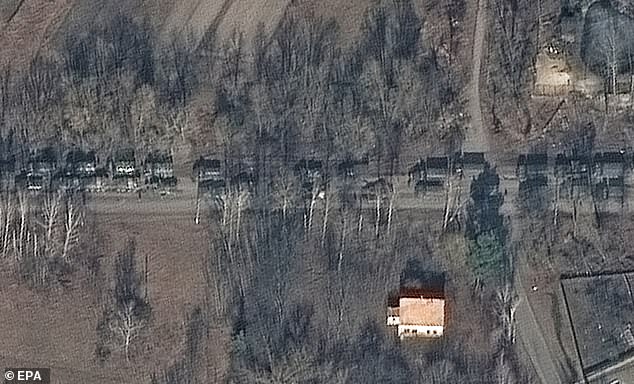 A satellite image made available by Maxar Technologies shows Russian ground forces in convoy near of Ivankiv, Ukraine, today

‘We can’t do that, because all ways are blocked,’ he finally said. ‘Right now we are encircled.’

When Russian troops invaded Ukraine on Thursday, the city of 2.8 million people initially reacted with concern but also a measure of self-possession. However, nerves started fraying when grocery stores began closing and the city’s famously deep subway system turned its stations into bomb shelters.

The mayor confirmed to the AP that nine civilians in Kyiv had been killed so far, including one child.

A Klitschko-ordered curfew began about sundown on Saturday and is to extend until at least 8 a.m. Monday. His order pointedly stated that any unauthorized person outside could be considered a saboteur.

‘We are hunting these people, and it will be much easier if nobody is on the street,’ Klitschko explained, saying that six Russian ‘saboteurs’ were killed Saturday night.

Russian troops’ advance on the city has been slower than many military experts had expected. 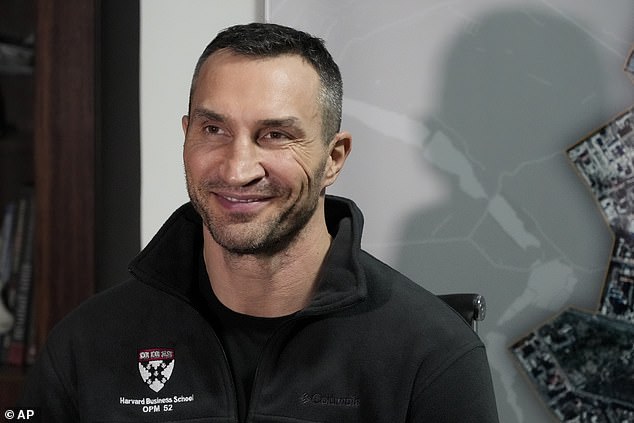 After a gruelling night of Russian attacks on the outskirts of the city, mayor Vitali Klitschko was silent for several seconds when asked if there were plans to evacuate civilians if Russian troops managed to take Kyiv 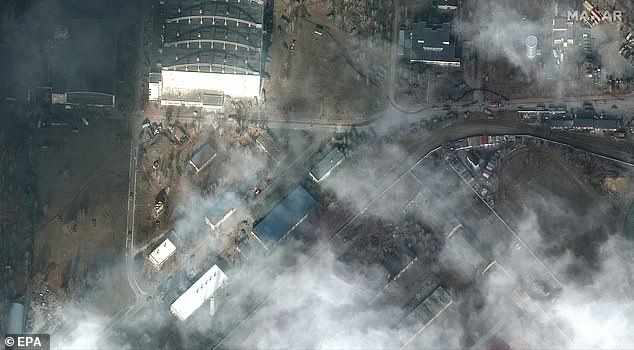 Citizens of Kyiv have resorted to arming themselves amid fears of an imminent invasion by Russian troops. (Pictured: satellite image showing Russian army heading to the captial of Ukraine)

‘I just talked to the president [Volodymyr Zelenskyy]. Everybody is not feeling so well,’ Klitschko said, adding that the Ukrainian city government employees were in shock but not depressed. ‘We show our character, our knowledge, our values.’

In the last few days, long queues of people – both men and women – were spotted waiting to pick up weapons throughout the capital, after authorities decided to distribute weapons freely to anybody ready to defend the city. There are concerns, however, about arming nervous civilians with little military experience amid warnings of Russian saboteurs disguised as Ukrainian police or journalists.

‘To be honest, we don’t have 100% control,’ said Klitschko. ‘We built this territorial defense in a short amount of time – but these are patriotic people.’

‘Right now, the most important question is to defend our country,’ he added.

Responding to a question about the city’s capacity to replenish dwindling stocks of food and medicine, Klitscho’s view darkened, however.

‘We are at the border of a humanitarian catastrophe,’ he said. ‘Right now, we have electricity, right now we have water and heating in our houses. But the infrastructure is destroyed to deliver the food and medication. 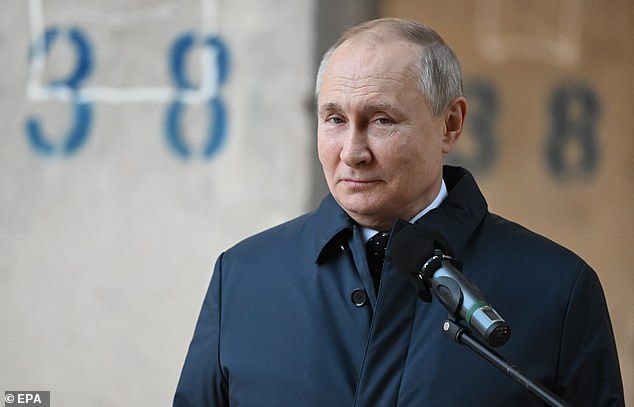 The convoy of thousands of Russian troops heading to Kyiv is three and a quarter miles long and is believed to be carrying fuel, logistics and armoured vehicles. (Pictured: Russian President Vladimir Putin) 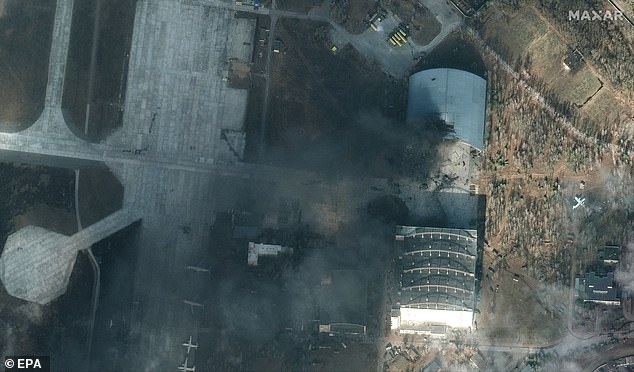 Ukrainian forces in Kyiv destroyed a column of Russian vehicles in the city’s northwest after surviving a ‘brutal’ night of shelling.

Volunteers, among them the former Miss Ukraine Anastasiia Lenna, have taken up arms to fight off Vladimir Putin’s army, with ‘long queues’ of citizens waiting to be issued weapons at recruitment centres in Kyiv.

Ukrainian forces have managed to halt the advance of Russian troops on the capital, blowing bridges into the city to hinder the advance of Moscow’s soldiers.

Russian forces were on Sunday afternoon destroyed in Bucha, near the Gostomel air base in the north west of Kyiv, after becoming trapped when the Irpin bridge into the city was destroyed.

Footage posted online purported to show the harrowing aftermath of what military experts said was likely a drone strike on the Russian Airborne Forces column, with parts of vehicles strewn across the road in a warp, fiery heap.

Earlier on Sunday, Ukrainian servicemen were pictured roaming in the centre of Kyiv to enforce a 39-hour curfew to keep people off the streets.

Mayor Klitschko said no Russian troops had managed to enter the city despite the bombardment.

He also warned those outside after 5pm and before 8am will be considered part of ‘the enemy’s sabotage and reconnaissance groups’ – he later said there were no Russian troops inside the city.

But he announced that at least nine civilian had been ‘lost or killed’ in the capital, among them one child, since the start of the invasion.

Two smoke clouds were filmed over the city this morning, though at least one was reported to be caused by Ukrainian forces blowing a bridge into the capital.

A second was reportedly caused by a Russian cruise missile in the Troieshchyna, a north eastern suburb of the city.

And by Sunday afternoon Ukrainian military officials were warning Belarussian special forces were preparing for an air assaults of the capital – in a sign Alexander Lukashenko has officially joined the Russian-waged war.