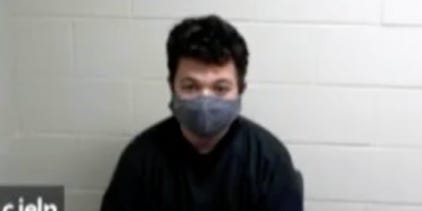 Kyle Rittenhouse, the 17-year-old charged with killing two people during a demonstration in Kenosha, Wisconsin, told Antioch, Illinois, police he had "ended a man's life" when he turned himself in to authorities early the next day, according to new documents obtained by Insider.

Rittenhouse "immediately became emotional and began crying," when he turned himself in on August 26, police wrote in their report. His behavior and demeanor changed frequently during his meeting with officers, according to the report, as he sometimes appeared calm, while at other points, officers observed him crying or "throwing up," the report said.

Rittenhouse is accused of shooting three people, killing two of them after he traveled from his home state of Illinois to nearby Kenosha, Wisconsin, during the chaotic anti-racism and anti-police brutality demonstrations on the night of August 25 following the caught-on-camera police shooting of Jacob Blake in the city.

When he surrendered, the 17-year-old told police he traveled to Wisconsin because he had been "hired to protect businesses in Kenosha during the riots and had to protect himself," according to the police report. Rittenhouse also said he had tried to speak with Kenosha officers at the time of the shootings but was told to "go home."

Rittenhouse, who was with his mother, Wendy, when he turned himself in told officers he was "hit with objects" prior to firing his weapon. He said he had been hit in the head with a baseball bat, a skateboard, and was "hit in the lower neck" before he fired.

According to the document, officers expressed concern for Rittenhouse's well-being and called the Antioch Fire Department to evaluate him. While waiting for the fire department to arrive, Rittenhouse told police he "shot two white kids."

The documents also reveal more information about how Rittenhouse obtained the weapon used in the shootings. According to the police report, officers visited the Kenosha home of the stepfather of Rittenhouse's friend, Dominick Black, on August 27.

Black's stepfather, whose name was redacted in the documents provided to Insider, said that his son had previously purchased the weapon for Rittenhouse in the state of Wisconsin. While the unidentified man said he typically kept the weapon secured in a locked safe in the garage of his home in Kenosha, he told police he had removed it from the safe and inside the home on August 24 for his own "personal protection" following the police shooting of Blake.

He said he didn't realize the weapon had been removed from his home until Wednesday afternoon. Upon discovering it was missing, he said he believed Black or Rittenhouse took the rifle from his property to perform the "security detail" they had been hired to complete in Kenosha.

When Rittenhouse turned himself in the early morning hours of August 26, he told officers that Black was currently in possession of the rifle, according to the report. At about 4:30 a.m., officers were able to obtain the AR-15 style rifle from the trunk of Black's vehicle. Officers also collected another AR-15 style rifle, also from Black's trunk, that Black said he himself carried in Kenosha.

Black told police the last time the two had used the rifles was two or three months prior when they went to a property "up north," according to the report. Black told authorities Rittenhouse purchased the weapon using his own money at an Ace Hardware store in Ladysmith, Wisconsin, but the two registered it in Black's name.

On Friday, a federal judge ruled that Rittenhouse would be extradited to Wisconsin to stand trial. Earlier in October, officials in Illinois announced that he would not face charges in his home state and said they found no evidence he carried the weapon used in the shooting outside Wisconsin.