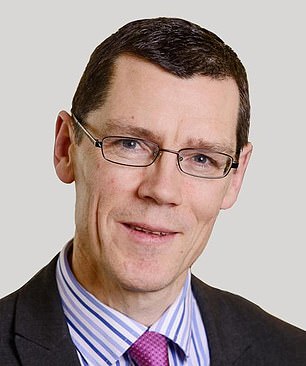 Chris Ramsey, headmaster of the all-boys Whitgift School in Croydon,said the brightest pupils would study abroad under the plan

A plan by the Labour Party to cap the percentage of students from independent schools who can attend university – proposed as a precursor to scrapping private schools altogether – would drive the brightest students overseas, a leading headteacher has warned.

The current trend among the very brightest students to study for an undergraduate degree abroad would accelerate, the annual meeting of the Headmasters’ and Headmistresses’ Conference (HMC) of 300 leading private schools was told in London.

And the policy would leave universities with underpopulated departments, casting around to find ‘appropriate’ students especially in faculties like modern languages.

The warning from Chris Ramsey, headmaster of the all-boys Whitgift School in Croydon, south London, comes after Labour passed a policy at its annual conference in Brighton calling for private schools to be ‘integrated’ into the state sector. 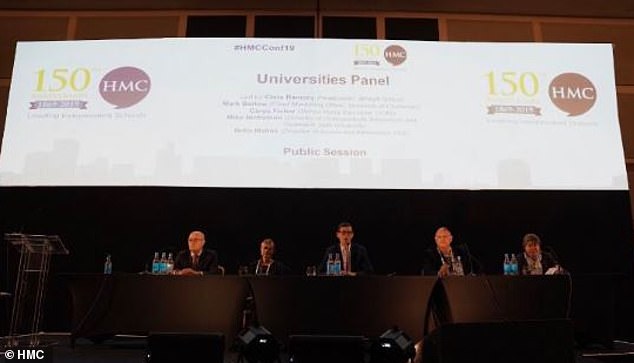 Mr Ramsey, centre, spoke at the Universities Panel at the conference in London this week

As an interim measure the party proposes forcing university undergraduate populations to mirror society at large and be comprised of no more than seven per cent privately-educated students.

Nationwide just over 10 per cent of undergraduates attended private school but at Oxford the figure is 41 per cent, while at Cambridge 32 per cent of students attended fee-paying schools. At Imperial College London, 37 per cent did.

Mr Ramsey, said many children would go abroad to study if they could not get a university place in Britain, The Times reported.

He said: ‘Some of the pupils at our schools are already choosing a university overseas.

‘It is a slow but steady increase and certainly not on the decline.

‘Say if you were running a university in the UK and you were suddenly told that only 7 per cent of your intake could come from the independent sector.

‘You’d be saying: “I don’t understand how I’m supposed to fill the university with appropriate students”.’ 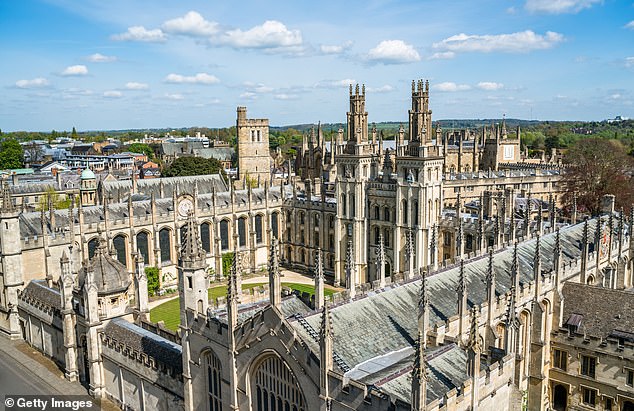 The annual conference of public school heads warned Labour’s policy of capping private school pupils who could attend university at seven per cent would lead to a brain drain. Pictured: Oxford where the undergraduate population is 41 per cent public-school educated

He cited modern foreign languages as an example of a course that would be particularly badly affected by such a policy shift.

A survey by the Conference found 2,500 privately-educated pupils in their final year were applying to study French, Spanish and other languages: a figure roughly one fifth of the UK’s modern language undergraduate total.

He went on: ‘If you take that one subject, if the seven per cent thing came in, where are the modern linguists going to come from?

‘Or are we simply going to shrink the modern languages departments?’

He called for universities to have ‘open, clear and academically fair’ admission rules rather than policies ‘controlled by a central government diktat’.

Although Labour based seven per cent cap on the proportion of children who attend private schools, that figure rises substantially to 16 per cent among 16 to 18-year-olds.

During a debate at the conference, Mark Barlow, chief marketing officer at the University of Chichester, said that implementing such a cap would be ‘nigh on impossible’.

UCAS’s Carys Fisher argued attempts to bring in a cap would ‘probably be detrimental’ to the progress the sector has made in terms of access for state school pupils.