French far-right presidential candidate Marine Le Pen vowed Thursday to issue fines to Muslims who wear headscarves in public, as candidates made a final push for votes three days ahead of an election seen as increasingly close.

President Emmanuel Macron built what seemed an unassailable lead ahead of the first round of polls Sunday, but Le Pen has eroded the margin and the latest polls suggest she is closing the gap.

With France’s traditional right- and left-wing parties facing electoral disaster, far-left candidate Jean-Luc Melenchon is on course to come third, but Le Pen believes she has a real chance of going toe-to-toe with centrist Macron and winning the run-off on April 24.

Speaking to RTL radio, Le Pen explained how her pledge to ban the headscarf in all public spaces would be implemented, saying it would be enforced by police in the same way as seatbelt-wearing in cars.

‘People will be given a fine in the same way that it is illegal to not wear your seat belt. It seems to me that the police are very much able to enforce this measure,’ she said.

Le Pen has said she will use referendums to try to avoid constitutional challenges to many of her proposed laws on the basis that they are discriminatory and an infringement on personal freedoms. 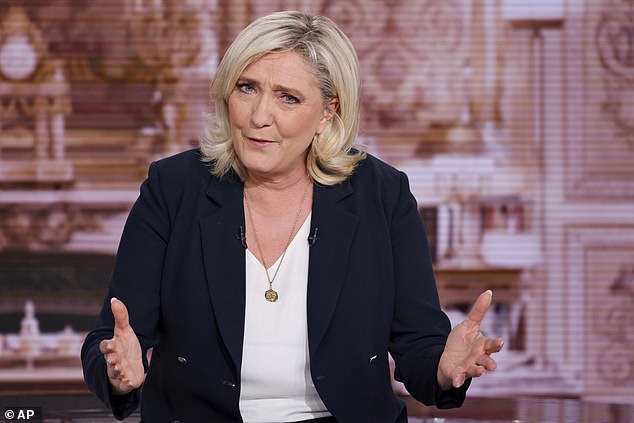 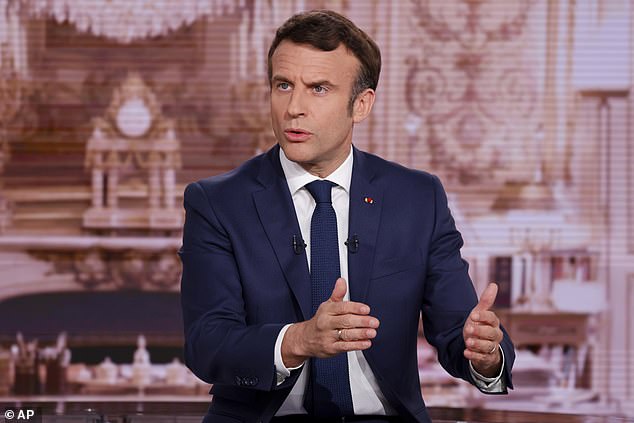 French President Emmanuel Macron and centrist candidate for reelection, speaks during ’10 minutes to convince’ ahead of the first round of France’s election this weekend 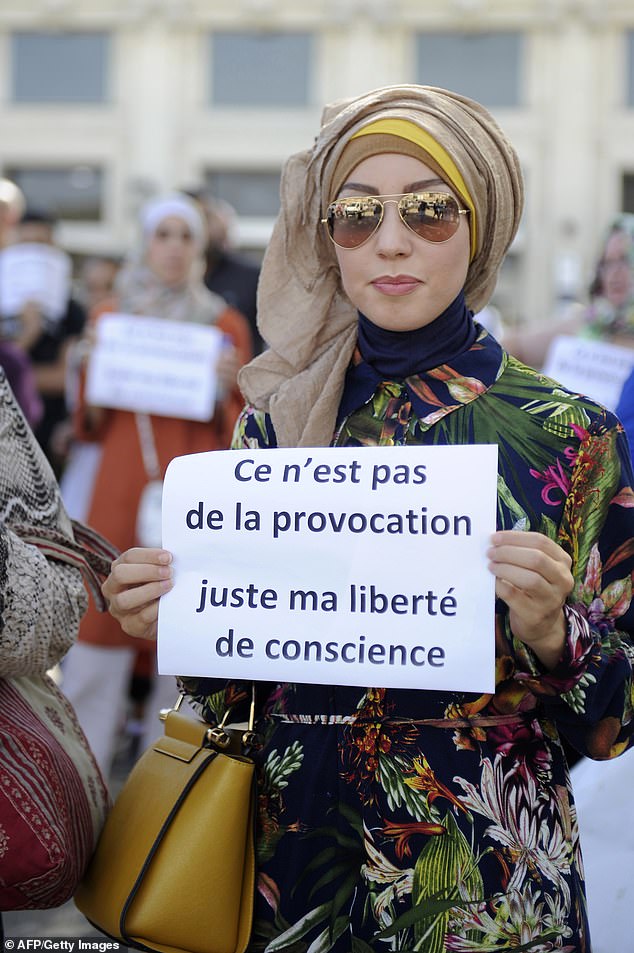 A woman holds a sign reading ‘It is not a provocation, just my freedom of conscience’ during a ‘headscarf march’ held in 2016. The banning of religious symbols in certain contexts has long been a hot topic in France

Previous legislation in France banning obvious religious symbols in schools or full-face coverings in public was allowed on the basis that it applied to all citizens and in specific settings.

Le Pen, 53, has toned down her anti-immigration rhetoric during campaigning this year and has focused instead on household spending, putting her closer than ever to power, polls indicate.

The latest surveys suggest she is within striking distance of centrist Macron if the two of them come top in the first round of voting on Sunday.

A second round run-off is scheduled for April 24, with an average of polls indicating Macron has a slight lead of 54 percent versus 46 percent for Le Pen.

Melenchon is also rising strongly ahead of voting and is talking up his chances of springing a surprise.

The war in Ukraine as well as strains on the health system after two years of Covid-19 are high among voter concerns, behind the biggest priority – inflation and incomes. 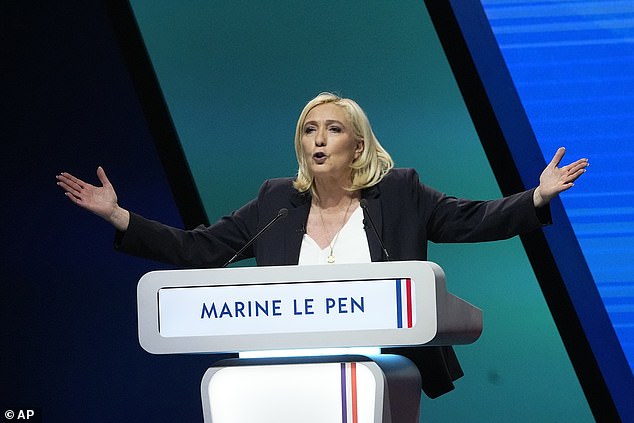 Le Pen is to hold her last campaign rally on Thursday evening in the southern stronghold of Perpignan where her National Rally party has long had strong support and runs the local council. The slogan ‘Vote!’ underlines the priority for Le Pen in encouraging supporters to turn out on Sunday after high abstention rates resulted in a disappointing result for her in regional elections last June 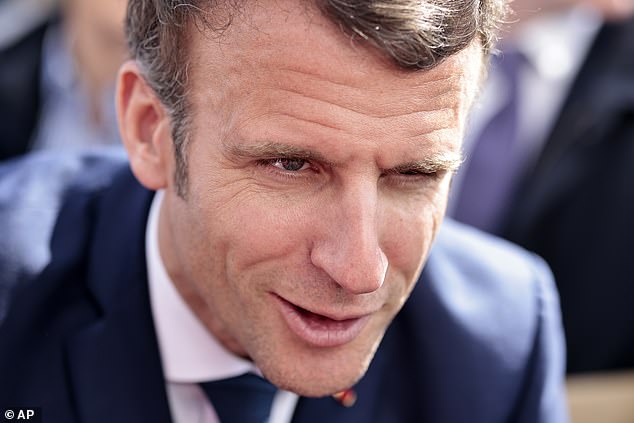 Macron will promise steady leadership in a time of crisis, while portraying Le Pen as a dangerous extremist. Both are in good position to reach the runoff on April 24. The first round of the presidential election will take place Sunday April 10, 2022

Le Pen is to hold her last campaign rally on Thursday evening in the southern stronghold of Perpignan where her National Rally party has long had strong support and runs the local council.

The slogan ‘Vote!’ underlines the priority for Le Pen in encouraging supporters to turn out on Sunday after high abstention rates resulted in a disappointing result for her in regional elections last June.

Macron will give an interview to the Aujourd’hui newspaper in which he is expected to continue his strategy of promising steady leadership in a time of crisis, while portraying Le Pen as a dangerous extremist.

Despite entering the campaign late after being distracted by the war in Ukraine, he has no scheduled public events on Thursday.

He acknowledged that ‘results on immigration were insufficient’ and that new arrivals had increased at the start of his term in 2017-2019. 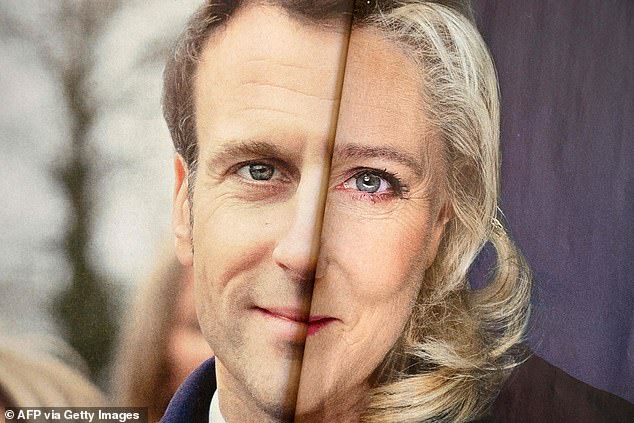 ‘Worries were created at this point. I didn’t succeed in reducing them and they have fed the (political) extremes,’ he said in reference to Le Pen and Zemmour, who is promising ‘zero immigration.’

A recent poll found that a slim majority of French people (51 percent) found Le Pen worrying, while 39 percent considered she had the stature of a president, up from 21 percent in 2017.

Around 65 percent of French people thought Macron had the stature of a president, the survey from the left-leaning Jean-Jaures Foundation showed.

Le Pen laughed at the idea that she could be demonised on her third run for the presidency despite Macron’s intention of attacking her as economically reckless and xenophobic.

‘Scare-mongering which entails saying that unless Emmanuel Macron is re-elected, it will be a crisis, the sun will be extinguished, the sea will disappear and we’ll suffer an invasion of frogs, no longer works,’ Le Pen told RTL.