The European Union will only agree to delay Brexit beyond October 31 if the UK has a general election to break the current deadlock, Leo Varadkar has suggested.

The Irish prime minister said there would be a ‘great deal of reluctance’ to pushing back the divorce date again because Brussels wants to move on from Brexit dominating the bloc’s discussions.

However, he said the EU would consider postponing Britain’s departure if extra time was needed for the next prime minister to go to the country. 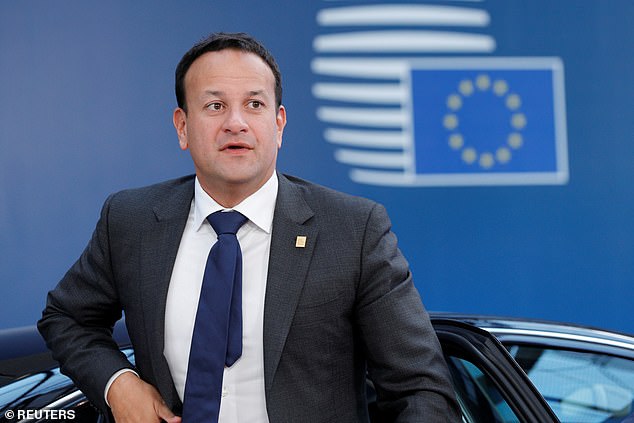 Leo Varadkar, the Irish PM, said there was a ‘great deal of reluctance’ among EU leaders to a further Brexit delay

Both Boris Johnson and Jeremy Hunt have said they do not want to have an election before Brexit has been sorted amid fears the Conservative Party would be hammered at the ballot box for having failed to deliver on the 2016 referendum result.

But there is a growing feeling in Westminster that the next prime minister could be left with no choice but to call an early election.

Mr Johnson and Mr Hunt have said they will renegotiate the Brexit deal if they take over from Theresa May.

But the EU has repeatedly said that the terms of the divorce deal cannot be changed from what was agreed with Mrs May.

If Brussels stands firm on that position then the candidates could try to pivot to the option of a No Deal Brexit.

Mr Johnson has vowed to deliver Brexit with or without a deal, ‘do or die’, by October 31 while Mr Hunt has also kept the option of No Deal but said he would be willing to seek a short extension if an agreement was within reach.

However, Remain-backing MPs have vowed to block No Deal and if they succeed then Mr Johnson or Mr Hunt would likely be left with just two options: A general election or a referendum.

Mr Varadkar suggested the EU would be willing to agree to a further delay to make time for a general election which could change the arithmetic in the House of Commons and unblock the Brexit process.

The Taoiseach said: ‘There would be a great deal of reluctance among European prime ministers to grant another extension beyond October 31.

‘We certainly wouldn’t rule it out and from Ireland’s point of view we’d be as facilitative to the UK as is possible, but I think a lot of other countries have become very frustrated at these rolling extensions so if there was another extension it would have to be for a particular reason.’

Mr Varadkar said asking for more time to conduct further negotiations or to hold further rounds of Commons votes on different Brexit options would not be enough.

‘It would be in the context perhaps if there were to be a general election in the UK,’ he said.

‘It would have to be a very good reason.’

Britain had been due to leave the EU on March 29 this year at the end of a two year period of negotiations with Brussels.

But Brexit was pushed back after MPs rejected Mrs May’s deal on three occasions and voted against the UK leaving with no agreement. Boris Johnson, pictured today as he voted in the Tory leadership contest, has committed to delivering Brexit, with or without a deal, by October 31 but MPs have vowed to stop him from going ahead with a disorderly divorce Jeremy Hunt, pictured running today, has also kept No Deal on the table but said he would be willing to agree a further Brexit delay if more time was needed to finalise a deal with Brussels

Dublin is in the process of stepping up its preparations for a No Deal Brexit and Mr Varadkar said protecting against a hard Irish border remained his government’s priority.

‘The absolute red line for us is, and always has been, that we have to have a legally operable, legally binding, assurance that whatever else may happen as a consequence of Brexit the re-emergence of a hard border between north and south won’t be one thing,’ he said.

Speaking at an event at Dublin Castle today, Mr Varadkar said he did not believe Mr Johnson or Mr Hunt actually wanted a No Deal divorce.

He also pointed out that both men had voted in favour of Mrs May’s existing Withdrawal Agreement.

‘It can’t be such an anathema to them that they were able to vote for it a few weeks ago,’ he said.