Verona: Frustration, philosophy and a touch of creativity: a gamut of human responses is on display as Italians learn to live under a coronavirus lockdown.

In Verona, one long-time resident reported no sense of runaway fear, even as the northern Italian city streets are abandoned and the grip of national lockdown tightened. 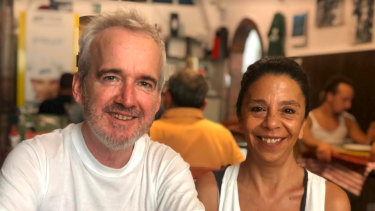 COVID-19 cases increase and deaths are mounting in the increasingly locked-down nation – even cemeteries are now off-limits.

Fabio A., also of Verona, is less philosophical. "All I can do is stay home, like a prisoner. This is a catastrophe."

The government believes in the goodwill of the people to do the right thing, said Fabio. "But that's impossible. You know Italians…"

Fabio says has no problem getting any food that he needs. "I can go everywhere around town. But if police stop me, they ask me where am I going and why? It's like a coup." 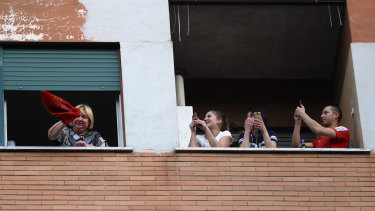 People stand at the window of their apartments during one of the many flash mobs taking place these days in Rome. Credit:AP

He asked that his full name is not published.

Newman says people are sending jokes back and forth on Whatsapp, "like, literally, there is no tomorrow".

The jokes are bad but I like that people are trying to connect anyway, he says.

Others post messages online proclaiming 'Tutto andra' bene' – "Everything will be OK.'"

As the national quarantine continues, everywhere it seems, from north to south, windowsills and terraces are draped with Italian flags.

Such simultaneous combustion of creativity is how some Italians, forced into domestic isolation, are coping and keeping spirits high as they do their part to slow the spread of coronavirus.

But citizens areconverting cooped-up energies into initiatives to make them feel still in touch while their government, struggling to contain Europe's largest outbreak, forbids them from leaving home except for essential reasons such as work, food shopping or bringing assistance to the elderly or disabled.

The virus can cause mild to moderate symptoms, although some cases are severe. The very large majority of those infected recover.

In Milan, residents thirsting for their cherished aperitivo (aperitif) tradition in their favourite bars have taken to toasting each other – via video chats – with laptops set up on credenzas, desks or dining room tables and a raised glass of wine or a bottle of beer from the security of their homes, possibly striking up new connections in the process.

One creative type who wanted to shed the lockdown loneliness blues is Paola Meztli Salas Pallares, a 32-year-old from Mexico who came to Milan in 2015 to pursue a career in graphic design.

She came up with the "virtual" aperitivo idea, and, "after the first session I feel better," she said. "I now know there are people like me that feel locked down and that are interested making new friends."

She added that she's looking forward to more of these "really nice sisterhood sessions" throughout the lockdown.

Solidarity across rooftops and courtyards seemed ever more precious after many cities, including Rome and Milan, decreed public parks off-limits Saturday, after some people disobeyed lockdown rules and hung out in groups to jog together, play soccer or crowd benches.

Under the government decree, people had been allowed to stroll, run or bike-ride in parks but only if they kept at least a metre apart from others.

Encouragement came from Pope Francis, who himself has lamented that he felt as if he were in a "cage" at the Vatican, since his public audiences have been scrapped.

Despite the lockdown, Pope Francis has visited two churches in Rome to pray for an end to the coronavirus pandemic.

After that, the Pope walked along a stretch of a central Rome street to visit another church. The second church has a crucifix that was carried in 1522 in a procession so that a plague then afflicting Rome would end.

Bruni says the Pope prayed for an end to the pandemic and the healing of those who are sick.

More than 24,700 people in the country have been diagnosed with the disease and more than 1800 people have died.

According to the World Health Organisation, the vast majority of people who get COVID-19 recover within weeks.