England’s final lifting of lockdown restrictions on June 21 is NOT ‘inevitable’, Government adviser warns amid fears over rapid spread of Indian variant 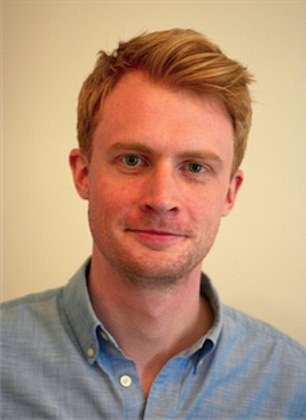 The final lifting of lockdown restrictions on June 21 is ‘not inevitable’, Dr Adam Kucharski, a member of the Spi-M modelling subgroup of Sage and assistant professor in the Department of Infectious Disease Epidemiology at London School of Hygiene and Tropical Medicine, has warned

England’s last stage of lockdown easing on June 21 is ‘not inevitable’, a Government adviser has warned amid fears over the rapid spread of the Indian Covid variant.

Eight areas of England where the have already been put under stricter restrictions, prompting outrage in Parliament today.

Dr Adam Kucharski, a member of the Spi-M modelling subgroup of Sage, said the spread of the Indian variant could also prevent lockdown easing fully on a national level on June 21.

The assistant professor in the Department of Infectious Disease Epidemiology at the London School of Hygiene and Tropical Medicine said the variant’s spread shows how ‘we need to keep all options on the table’.

Dr Kucharski told BBC Radio 4’s Today Programme: ‘We have to avoid seeing this as a weather forecast where it’s inevitable, things are going to be open, it’s inevitable.

‘Of course, it doesn’t make that an easy decision, keeping things in place or introducing things incurs a harm as well.

‘But I think we do have to look at the patterns we’re seeing very seriously, and think about where that may leave us in a couple of months time.’

People have been warned not to travel Bolton, Blackburn with Darwen, Kirklees, Bedford, Burnley, Leicester, Hounslow and North Tyneside amid spiralling cases of the Indian variant in those areas.

But the Government advice was slammed as sneaking in ‘local lockdowns by the back door’ by MPs today.

Local authorities said they had not been consulted on or informed of the advice which appeared on the Government’s website on Friday. 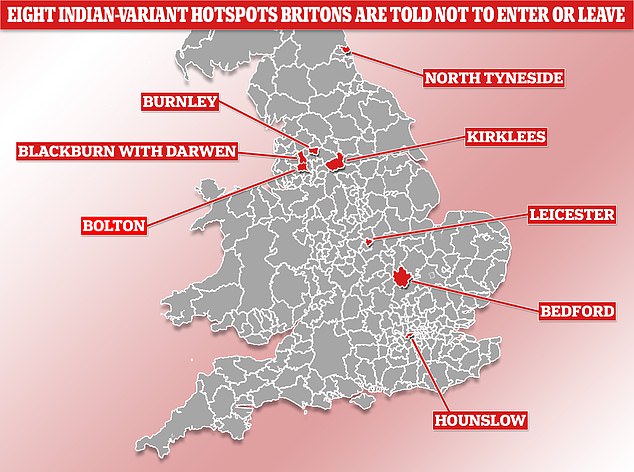 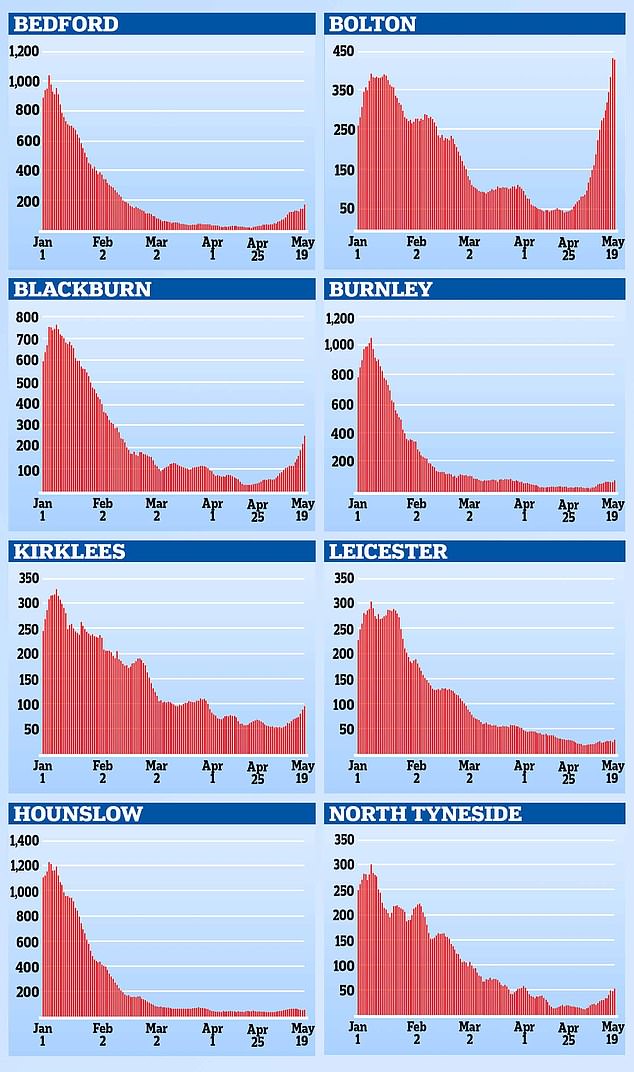 Data shows how big Covid outbreaks are in the eight areas with the travel guidance. The figures show how the rolling seven-day infection rate (the number of cases spotted in a week for every 100,000 people) has changed since the start of the year, with it spiking in Bolton (top right) to above levels seen during the second wave in January. Cases appear much flatter in other areas, including Leicester and Hounslow

Dr Kucharski said the Government may have to act on early data suggesting cases could spiral out of control in some areas of the country before it is ‘too late to do something about it’.

He said: ‘We’re seeing a lot of early signals — it’s very preliminary data — but increasingly they’re lining up in a way that we don’t want to see.

‘So recently, over the week, we’ve had evidence that vaccine effectiveness, particularly after one dose, isn’t as high against this variant.

‘We’ve got evidence that the transmission risk per contact seems to be higher, much as we say for the B117 variant in Kent before Christmas.

WHAT DOES THE GUIDANCE NOT TO VISIT INDIAN VARIANT HOTSPOTS SAY?

Cabinet Office guidance says people should avoid travelling into and out of eight Indian variant hotspots in England.

The advice for Bolton was issued on May 14, with the other seven added in the lead up to May 21, The Guardian reports.

It reads: The new Covid variant spreads more easily from person to person. To help stop the spread, you should take particular caution when meeting anyone outside your household or support bubble.

In the areas listed, wherever possible, you should try to:

You should get tested for Covid. This includes:

You should self-isolate immediately if you have symptoms or a positive test result for Covid. There is financial support if you’re off work because of coronavirus.

‘And then also just looking at the growth of this variant versus the other one circulating, there does seem to be that difference in spread.

‘But of course it might be a feature of the communities [in which] it’s spreading, it might be this vaccine potential for escape, it might be inherent viral characteristics.

‘It’s probably a combination of those but as ever with the pandemic, if we wait until we have definitive evidence that there’s a problem, that might be too late to do something about it.’

The mathematician said that while data released by Public Health England on Sunday showed vaccines were just as effective against the variant after two doses as the Kent strain, not enough people will have had a second jab by June 12.

He said: ‘I think August, September, we will be in a different situation but it leaves us in this period where a lot of people have had a single dose.

‘And if you were to see a lot of infection then, although the risk is much lower say in middle aged groups, a large number of infections multiplied by a fairly low risk can still lead to a considerable level of disease.’

He said a surge in infections could cause mass hospitalisations over the summer, depending on whether the variant is as transmissible and vaccine resistant as some of the data is showing.

Dr Kucharski said: ‘You do get some scenarios looking at the data at face value suggesting some areas could be facing some quite troubling outbreaks.’

But the latest data from the Government’s Covid dashboard suggests Bolton’s Indian coronavirus variant outbreak may have already peaked.

MailOnline’s analysis of Department of Health figures show positive tests appear to have plateaued in the borough for the first time in a month, following a period of exponential growth fuelled by the mutant B.1.617.2 strain in April and early May.

Figures show Bolton’s rolling seven-day average number of infections was about 177 on May 16, the most recent date for which data is available, down slightly on the 178 the previous day. Before that, infections had risen sharply every day since April 19, when there were just 17 positive tests each day, on average.

While Bolton — home to around 195,000 people — is still suffering the highest proportion of cases of anywhere in the country mainly because of the Indian variant, the fact the coronavirus is no longer growing rapidly suggests the town’s outbreak may have already peaked.

It is possible, however, that the infection figures mark a one-day blip and that positive tests could rebound again. Further data confirming the trajectory of cases will be released this afternoon.

But Cambridge University epidemiologist Dr Raghib Ali told MailOnline the signs were ‘encouraging’ and Bolton’s outbreak appeared to be ‘plateauing’. He said locals appeared to be taking personal precautions.

In another promising sign for Bolton, the Government’s Covid dashboard shows the town’s test positivity rate has also been declining in recent days.

Currently 5.9 per cent of all PCR swabs done in the borough are positive for Covid, according to data from May 19, down from a peak of 8.1 per cent a week earlier, on May 11.