A West Australian MP is the latest person to call into question the accuracy of the free lollipop rapid antigen tests handed out in bulk to households across the state. 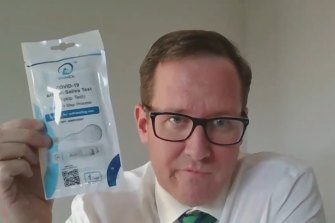 Nationals MP Martin Aldridge has called into question the accuracy of the RATs handed out by the WA government.

Appearing via video link during a parliamentary estimates hearing with the Department of Health on Tuesday, Aldridge said every member of his family was COVID-positive but daily tests with the lollipop RATs failed to show any sign of infection.

“Even though I know they are positive via PCR or nasal swab, I am unable to return a positive result from any member of my household on these saliva tests,” he said.

Aldridge said the public was “swimming” in these tests.

“I can’t give them away to the public anymore and I think after my experience in the last week I’m not sure I want to,” he said.

Aldridge questioned Chief Health Officer Dr Andy Robertson on whether he had reconsidered the “validity” of using the saliva tests as part of the diagnostic measures in place for COVID-19.

Robertson said all rapid antigen tests registered by the Therapeutic Goods Administration must meet at least 80 per cent sensitivity.

“We do continue to look at the accuracy and sensitivity of the rapid antigen tests,” he said.

“We have seen if the saliva tests are not done correctly their sensitivity is reduced.”

The state government purchased 110 million rapid antigen tests from four suppliers at varying cost, with the cheapest $4.85 each and the most expensive $6.95.

During questioning, Health Department deputy director general Angela Kelly admitted there was no methodology behind the number of RATS ordered for WA.

“In the December period we were seeing some significant increases in COVID-19 around the world particularly with Omicron,” she said.

“Agencies around the world were ordering RATs and we wanted to make sure we had a significant number to protect the community.”

The government has repeatedly declined to answer questions on how many of the RATs procured were the V CHEK lollipop tests in the spotlight.

Aldridge is not the first person to question the accuracy of the lollipop RATs.

Last month the accuracy of the tests being distributed in bulk to homes and students across WA was thrown into doubt as people reported a high number of false negatives on social media.

The TGA has engaged the Doherty Institute to undertake independent laboratory testing of COVID-19 rapid antigen tests to verify the manufacturer’s claims regarding the analytical sensitivity to the Omicron variant.

Results were expected in early June but have yet to be published.

The TGA currently has a list of manufacturers who have provided evidence about their tests’ performances.

The Chinese manufacturers of the V-CHEK COVID-19 antigen saliva test has self reported it showed evidence of performance against Alpha, Beta, Gamma, Delta, Kappa, Epsilon and Omicron variants.

Its product disclosure lists its ability to detect the Omicron variant as lower than other variants.