‘He overpowered her in a split second’: London Zoo chief reveals horrifying moment ‘majestic’ female tiger was mauled to death by breeding mate ‘in a blink of an eye’ minutes after pair were introduced

London Zoo has insisted keepers could not have foreseen or stopped a fatal attack by a male tiger on its potential mate which unfolded ‘in a split second’.

Ten-year-old female tiger Melati was mauled to death by seven-year-old male Asim when keepers allowed the pair to meet for the first time at the central London zoo on Friday.

The zoo’s CEO Kathryn England today said the attack led to ‘one of the most difficult days of my long career working with animals’.

She insisted there was no sign the animals would react how they did and they had been ‘calling and “chuffing” [making friendly noises] to each other’ before they were allowed in the same enclosure. 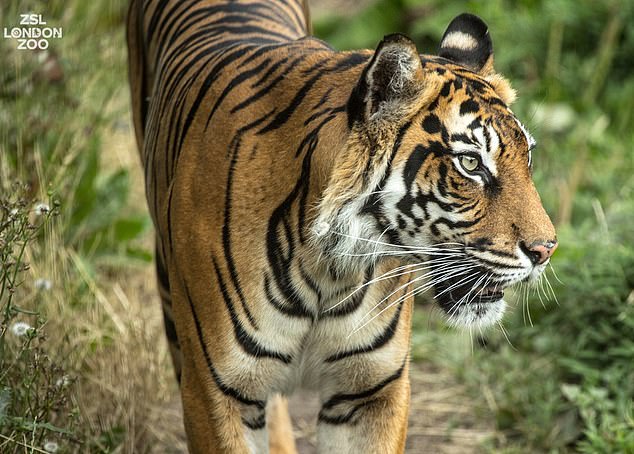 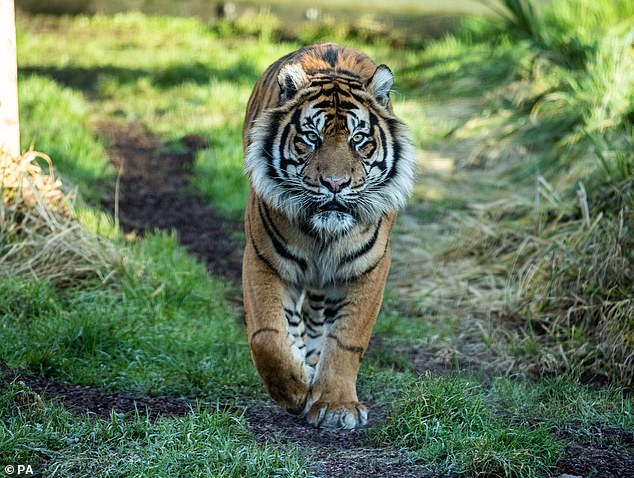 She said keepers were watching their moves very carefully when they were introduced and were ready with fire extinguishers, airhorns, hoses and flares in case things went wrong.

She said: ‘Initially everything about their meeting was as we expected. They watched each other, they were cautiously interested and they sniffed the air for several minutes.

‘A certain amount of posturing from the male is natural; it is normal for him to exert dominance so the female submits.’ 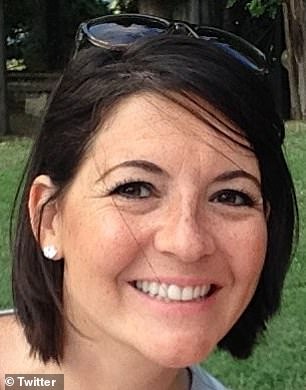 ‘They swiped at each other and reared up – all quite a normal part of them testing their boundaries. But in the blink of an eye, with no obvious provocation, they turned on each other and our years of experience told us it was beyond normal.

‘The initial skirmish lasted a few seconds and we were already reacting. Asim started to retreat and we were poised to close the gate when Melati lashed back out at him.

‘He overpowered her in a split second. Everyone sprang into action; lighting flares, sounding airhorns and setting off fire extinguishers and hoses.

‘Unfortunately by the time Asim retreated the second time and we could close the gate, Melati had been fatally injured. It took moments.

‘Everyone was numb with shock, and the sheer disbelief was palpable.

‘As soon it was safe our vets ran to Melati with every hope they might yet save her, and even these experienced professionals of the zoo world were entirely distraught to find they couldn’t.’

Ms England disputed claims that the tigers were introduced too quickly, saying that leaving tigers who showing an interest in each other out of contact for too long leading to ‘tension and frustration’ in the animals.

She also said that the perimeter of the enclosure had been checked for anything that could spook the animals and the surroundings were ‘quiet and calm’.

Asim, who carried out the attack, has since been ‘cared for’ and made comfortable, she said, to reduce any impact of the incident on him.

Ms England also defended the zoo from criticism about keeping the animals in captivity.

She said: ‘Tigers are critically endangered; their role in zoos is as part of a breeding programme to form an assurance population against extinction in the wild. Because that is sadly a very real possibility.

‘Even calling it the wild conjures up an idea of something that doesn’t quite exist anymore.

‘Wild Sumatran tigers are living in poor forests degraded by agriculture, and many are trapped in tiny pockets of forest with no way of reaching a mate without coming into conflict with humans.’ 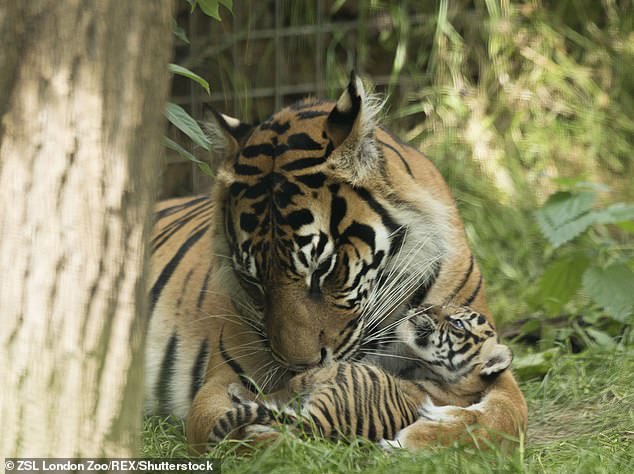 Ten-year-old Melati, pictured, had been at London Zoo since 2012 and raised three litters of cubs with her previous mate Jae Jae who was recently sent to Le Parc des Félins in France

Ms England concluded: ‘Wild tigers only stand any chance of survival because conservation organisations like ZSL and WWF are working with governments to protect them in their home ranges.’

She paid tribute to the slain tiger, who she called a ‘special tigress’.

Ms England added:  ‘Melati contributed to a more secure future for tigers, not only through her cubs but through the affinity she built with our many visitors – reinforcing why zoos like ours play such an important role in the future of wild animals.’

Sumatran tigers:Endangered species is dying out in the wild

Sumatran tigers are the smallest surviving subspecies of tigers in the world, with just 400 recorded in the wild.

They are clinging to survival on their native island of Sumatra in Indonesia, where much of their habitat has been desecrated by humans.

Their unique environment is the only place in the world where rhinos, orangutans and elephants live together with tigers. 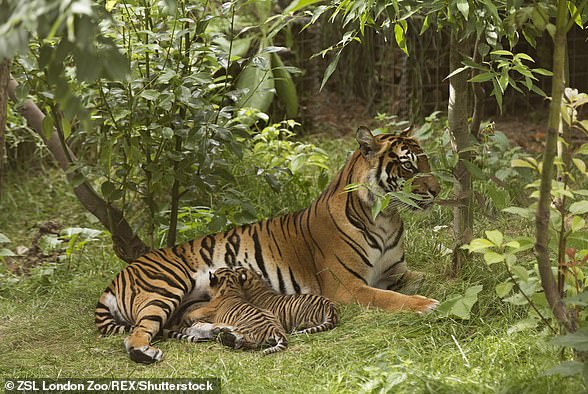 Ever-growing levels of deforestation, as well as horrifying levels of poaching have decimated the population of the majestic predator.

The tigers are killed largely for trade on the black market, with tiger bones being used in traditional Chinese medicine in tiger bone wine.

The WWF estimate that up to 40 Sumatran tigers are slaughtered each year by poachers.

Another problem is created by encroachment onto their habitat and when the tigers naturally react aggressively, villagers kill them for retribution.

Their relatives in the Javan and Balinese forests have been extinct for years and conservationists fear they could meet the same fate.