Seven in 10 people with back pain will have a new episode each year. But that's not enough to motivate people to keep doing the one thing proven to prevent pain.

Researchers from the University of Sydney say the only intervention known to prevent back pain is prolonged exercise. It can halve the risk of having back pain again. Effective programs usually run for about six months and entail two to three sessions a week that mix cardio, flexibility and core. 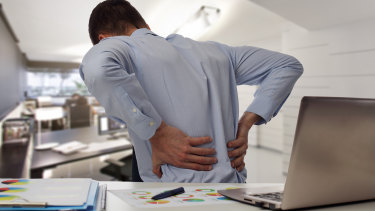 Back pain is a common problem for many people.Credit:Shuttestock

In a survey of 647 people who recently experienced back pain, they found most people who were told exercise would reduce their pain said they would do it.

But there was a big if, found new research published in the Journal of Physiotherapy on October 24.

The title of the research sums up the problem: "People considering exercise to prevent low back pain recurrence prefer exercise programs that differ from programs known to be effective."

Lead author Giovanni Ferreira from the Institute for Musculoskeletal Health said the research found the longer the program, the less likely they were to participate. The institute is a research partnership between Sydney Local Health District and Sydney University.

Mr Ferreira said previous studies had shown exercise did reduce lower back pain if there was ongoing commitment. "It is like [reducing] high blood pressure, you can't do one month of exercise and that's it," he said.

Cost was also a factor. For every $10 increase in the cost of these programs, researchers saw a significant decrease in willingness to exercise among people from low and middle incomes. And people on lower incomes were less likely to prefer exercise as a solution than others.

Whether someone was in pain at the time they were being surveyed made no difference to answers.

Andrew Murray from Baulkham Hills has suffered back pain intermittently for nearly 30 years. It is occasionally bad enough to prompt him to take a day off work.

Mostly he heads to the physiotherapist, where he goes through exercises to improve his flexibility and core strength. It helps. But once the physio tells the 49-year-old construction project manager that he should keep on exercising by himself at home or the immediate pain goes away, he stops. 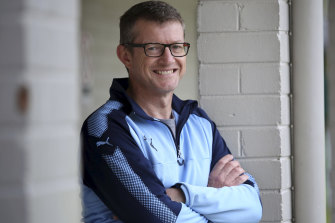 Andrew Murray who has suffered back pain for many years near his Baulkham Hills home in Sydney’s west.Credit:James Alcock

"It is out of sight, out of mind," Mr Murray said.

The research into people's attitudes was prompted after Sydney University attempted in 2018 to recruit participants for a free three-month program to prevent back pain entailing group sessions and some one-to-one work with a physiotherapist.

"Many declined. It was too much commitment. And most people that got into the trial failed to attend some of the group sessions," Mr Ferreira said.

Lower back pain is the leading cause of disability globally.

The research recommends the development of strategies to increase motivation and confidence to
participate in exercise-based prevention programs. It also suggests that people with low back pain should be advised explicitly about which exercise programs reduce recurrence.

As a result of the study, the university is looking for participant to join a trial of a walking program to prevent low back pain

The most important news, analysis and insights delivered to your inbox at the start and end of each day. Sign up to The Sydney Morning Herald’s newsletter here, to The Age’s newsletter here and Brisbane Times‘ here.