MAIL ON SUNDAY COMMENT: The lumbering EU monster panicked and showed its true nature. A better vindication of Brexit could not be found

As the ancient proverb says, when the gods wish to destroy a man, they first make him mad. The contortions and swerves of the European Union over vaccines in the past few days certainly suggest that it is losing its reason.

Perhaps in time these events will weaken its strange power over much of Europe and compel its peoples and leaders to reconsider the wisdom of building a vast multinational state in defiance of human nature.

What is the reason for all this flailing, for the sudden threat to create a border across Ireland in defiance of everything that the EU and its leaders have claimed, for years, to stand for?

This proposal, now abandoned amid fury and derision, is in fact the key to understanding the significance of the moment.

How many times have we had to listen to supporters of the European project, and of Britain’s continued membership of it, lecturing and preaching to us about this very issue, and about how Brexit would lead to a renewed hard frontier along the 300 winding miles from Carlingford Lough to the Foyle Estuary? It was never true. The physical border which once existed was created largely by the Troubles, and vanished when they ended, becoming virtually invisible in recent years. 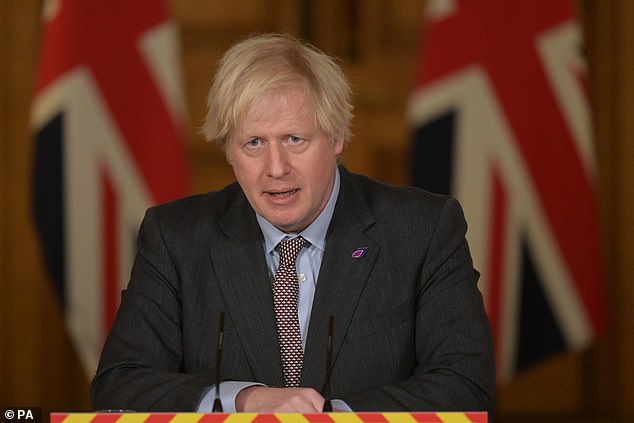 As the ancient proverb says, when the gods wish to destroy a man, they first make him mad. The contortions and swerves of the European Union over vaccines in the past few days certainly suggest that it is losing its reason. Pictured: Boris Johnson on Wednesday

Britain and Northern Ireland had no desire to create any such thing, and no reason to do so, and Boris Johnson bent over backwards in his negotiations with Brussels to ensure that no demarcation line would ensue when we left the EU.

In fact, a unique internal division now exists between Britain and Northern Ireland, a powerful sign of just how much London wished to keep the island of Ireland physically undivided.

Not so Brussels, as we now find out. When the European Commission thought its interests were threatened, out went all the pious rhetoric of the past and in came total power-hungry cynicism.

In Dublin, in Belfast and London alike, politicians and people who have long been divided came together in a coalition of amazed shock and dismay.

It must be a unique achievement to have combined Boris Johnson, the Democratic Unionist leader, Arlene Foster, the fervent anti-British Republicans of Sinn Fein, the Irish Government itself, the Labour Party and even the Archbishop of Canterbury in unanimous fury.

Initially speechless with anger, this unexpected alliance of disparate opponents made their feelings known in the foggy, insulated corridors and committee rooms of Brussels. And the EU, suddenly remembering that it was supposed to be Dublin’s most reliable ally and friend, grabbed hold of the handbrake and swivelled round to face in the opposite direction. 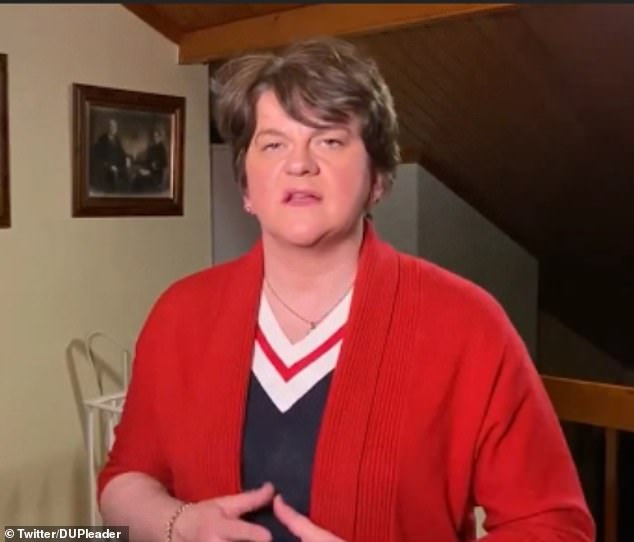 It must be a unique achievement to have combined Boris Johnson, the Democratic Unionist leader, Arlene Foster (pictured), the fervent anti-British Republicans of Sinn Fein, the Irish Government itself, the Labour Party and even the Archbishop of Canterbury in unanimous fury

Well and good. It is far better to admit and correct a mistake than to persist pigheadedly with the original error. But as in so many such events, the lasting outcome is that we now know what the EU’s directing spirits are really like when they panic and pursue their own interests with honest ruthlessness.

It would be hard to find a clearer way of showing that those who campaigned to take this country out of the EU were right when they said it was a sclerotic, centralised scheme which was bound by its nature to trample on the rights and freedoms of independent nation states, even those it claims to favour and nurture.

Its guiding idea was that traditional nations were unable to govern themselves or make their own decisions, that major actions were better done in unison, that together they were stronger.

But contrast the EU’s performance over Covid vaccinations with that of the independent UK. The results say it all.

While millions of UK citizens have been vaccinated and the programme speeds ahead, many EU countries have barely begun, and are still squabbling among themselves.

The Irish crisis resulted from those squabbles, and a selfish desire to grab as big a share as possible of Pfizer vaccines, which Britain had already secured by forethought and good planning. Even a German newspaper has described Britain’s nimble, alert performance as ‘the best advert for Brexit’.

Early decisions to develop a vaccine, to ensure swift experimentation and tough but decisive approval mechanisms, to prepare the necessary logistics, and to sign vital contracts, all paid off.

Compare the glacial performance of the EU’s cumbersome bureaucracy, as usual moving at the pace of the slowest.

In fact, several EU nations did try to launch out on their own, with France, Germany, Italy and the Netherlands forming a ‘Vaccine Alliance’. But, in a highly significant demonstration of the realities of living in a centralised superstate, this was abruptly cancelled.

German Chancellor Angela Merkel realised that it was defying EU dogma. And dogma won. So, far from together being stronger, the opposite is true.

The nation state, with its lasting common interests, its short lines of communication, its existing structures of experience and co-ordination, its single language and law, actually works better in a crisis than a vast multi-lingual collection of wholly disparate nations which can and does spend years standardising the most basic widget, notorious for delay, indecision and tardy outcomes. 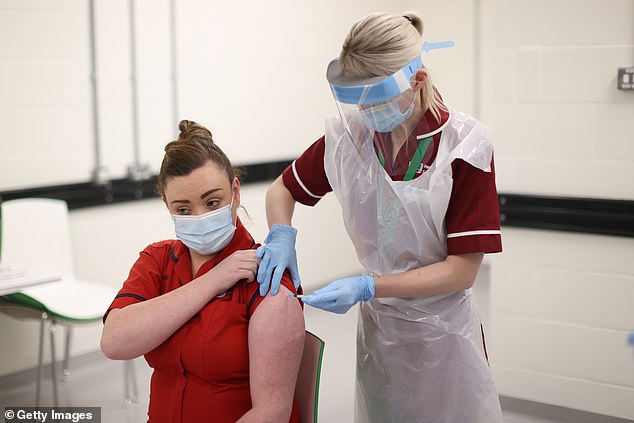 Certainly in this case, Britain has demonstrated beyond doubt that it is far more supple, quick, inventive and ready to take necessary risks than its giant neighbour. How fitting it would now be if Britain, which has always hoped to remain on the best of terms with its former EU partners, were able to offer help with vaccines to our valued friends in the Irish Republic.

Many people deserve credit for this outcome. Health Secretary Matt Hancock realised from the start we would need to boost our manufacturing capacity to ensure that others would not capitalise on the likely success of our science. The ‘vaccine tsar’ Kate Bingham, devoted extraordinary energy and commitment to her task, single-mindedly obeying Boris Johnson’s mandate to ‘stop people from dying’ with an intense purpose comparable to a wartime scramble to develop vital new weapons.

But there was also planning. The Deputy Chief Medical Officer, Jonathan Van-Tam, showed extraordinary and crucial foresight, spotting in time that without vials to put the vaccine doses in, and without freezers to store them, all other efforts would fail.

So here the United Kingdom is, responding with speed, skill and efficiency to the challenge, vaccinating multitudes hour by hour and driving back the danger of the virus, jab by jab and day by day.

And there is the EU, fumbling, held back by internal jealousies and meaningless rivalries between national governments and central power.

And on Friday night it all came to a head in an astonishing demonstration of the abiding truth.

We were, and are, and will be better off outside this lumbering, inefficient monster. And it may well be that the peoples of the EU will now seek reforms to restore to their own nations at least some of the freedom which we have won back.