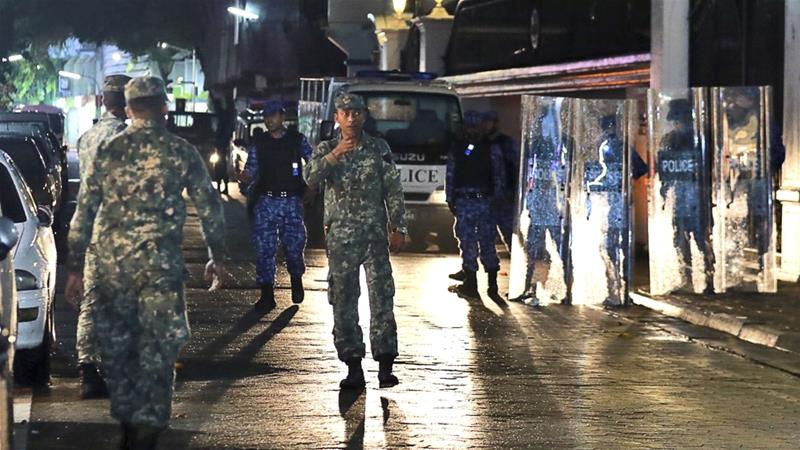 A political crisis in the Maldives has taken a new turn after three judges at the country’s top court reversed a landmark ruling to release nine opposition politicians.

The new order on Tuesday came hours after President Abdulla Yameen declared a state of emergency and sent in security forces to storm the Supreme Court building and arrest two judges on the five-member bench.

Yameen later accused the pair of plotting to overthrow him.

The new ruling, which was published online, was signed by the bench’s three remaining judges.

It said the judges, upon considering concerns raised by the president, had decided to “annul” a section ordering the release and re-trial of the nine people, seven of whom are imprisoned in the Maldives.

The sudden reversal capped a crackdown in which police also detained Yameen’s half-brother, former President Maumoon Abdul Gayoom, who has sided with the opposition, on charges of bribery and trying to overthrow the government.

The Maldives, an Indian Ocean archipelago, was plunged into turmoil on February 1 when its Supreme Court issued a shock ruling that overturned criminal convictions against nine of Yameen’s opponents, including exiled former President Mohamed Nasheed, and ordered those in jail be freed.

“The Supreme Court is under military watch. The chief justice and Judge Ali Hameed are in jail. Yameen has coerced and intimidated the remaining judges until he got the ruling he wanted,” she told Al Jazeera.

Earlier in the day, Yameen said in a televised address that he was left with “no choice” but to declare an emergency in order to hold judges accountable and to “find out how thick this plot, this coup was”.

He went on to accuse the two detained judges of corruption.

Meanwhile, Nasheed, the ex-president, urged India to intervene in the Maldives.

“We would like the Indian government to send an envoy, backed by its military, to free the judges and the political detainees,” he said in an appeal.

He also called on the United States to impose targeted economic sanctions on Yameen and his associates.

For their part, India and the US said they were “concerned” and troubled by the emergency decree, while the United Nations, the European Union, the United Kingdom and Germany urged Yameen to lift it and restore civil liberties.

Notably, judges on Tuesday did not annul an earlier decision to reinstate 12 parliamentarians who lost their seats after they defected to the opposition.

If the 12 are allowed to return, the opposition will have a majority in the 85-member house.

But it is not clear when the parliament will reconvene as the speaker, a Yameen ally, has cancelled the opening of the parliament citing unspecified “security concerns”.