Businessman, 27, SURVIVES being shot in the back and head during ambush by heavily armed robbers and drives for a mile before seeing police and asking for help

A motorist incredibly survived an ambush of heavily armed robbers who unleashed a barrage of more than 30 bullets in a suspected car-jacking in Brazil.

David Esteves, 27, suffered two bullet wounds to his back and one to the temple and will undergo surgery but his injuries are not thought to be life threatening.

Shocking footage shows the suspects ducking, diving and leaping as they try to dodge cartridges ricocheting off the ground in Tijuca, north zone Rio de Janeiro.

CCTV cameras captured the mayhem as Mr Esteves stops in his white Honda Civic at traffic lights on Tuesday 11 December and is surrounded by shooters who jump out of three cars. 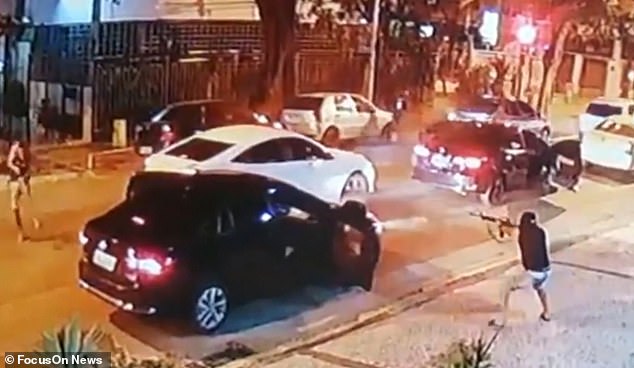 The men jump out of their cars and surround David Esteves’s white Honda Civic at the traffic lights in Tijuca, north zone Rio de Janeiro

One hooded mobster with a submachine gun appears to be directing the onslaught while other accomplices point their weapons at vehicles behind and appear to rob other victims in the traffic.

The gangsters machine-gun their stationery target as one getaway car speeds off breaking the stop lights. A taxi and another car caught up in the action quickly follow suit.

The victim tries to escape by ramming the back of the bandit’s car which is blocking his way. The ferocious assault lasts for several seconds then the intensity suddenly decreases as the traffic lights turn green.

The henchmen disperse, racing back to their vehicles, and the victim again tries to flee.

Cops believe the bandits had just committed a robbery at a nearby establishment and attempted to hijack the car to be used as another getaway vehicle.

But when the businessman, who runs an information technology company, tried to escape, they discharged more than 30 rounds on the vehicle. 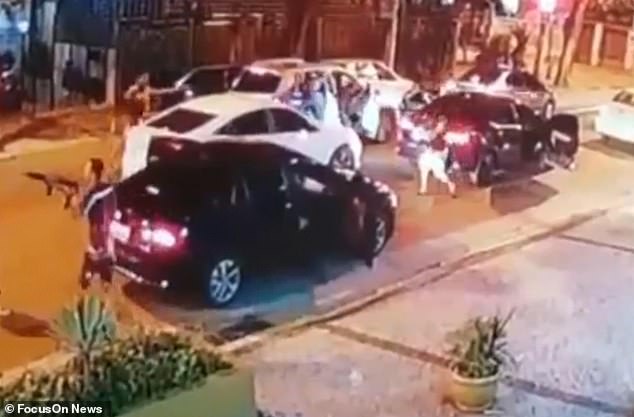 Despite being wounded, the victim manages to drive a few yards further down the road but is pursued by the gangsters who persist with the assault.

Security cameras on another building capture the aggression continuing from a different angle as the car rolls to a halt on the corner of the road.

One of the assailants tries to break the driver’s window and wrenches open the door.

Another holding an automatic weapon fails to open the back door. It’s believed they grabbed an undisclosed item from the victim.

In the midst of the harrowing attack cops patrolling the area hearing the gunfire, sped to the area and began exchanging shots with the gangsters.

The victim is seen slumped out of the door of the bullet riddled car as the hoodlums speed off. He appears to recover and using one arm to push himself up begins to drag himself out of the vehicle.

Family members claimed he was going to ask for help but panicked when he heard more gunfire and a spurt of energy helped him to get back behind the wheel. 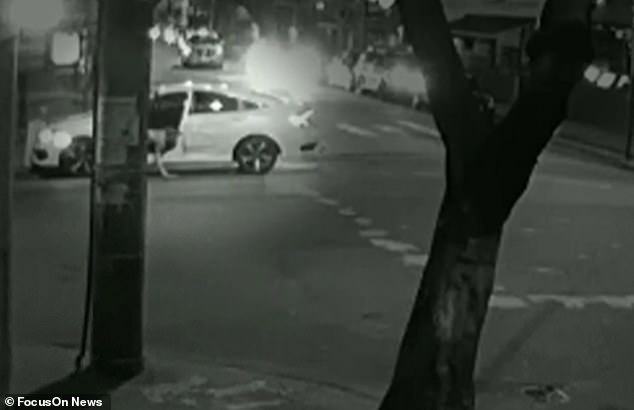 Mr Esteves, who runs an information technology company, can be seen slumped out of his car

The injured man drove for a just over a mile and pulled over when he saw a patrol car. Agents took him to Souza Aguiar Hospital.

The businessman’s sister, who did not want to be named, described her brother’s survival as a miracle.

She said to Rio Extra: ‘It was a miracle David escaped alive. When I arrived at the hospital, I found him lucid but traumatised. I saw his bloody shirt and counted at least five bullet holes.

‘The incident happened just after he left his father-in-law’s house. He had gone to visit his three-month-old son.

‘Shortly after leaving he noticed several cars racing up behind him and the attack started the moment he stopped at the intersection,’ she explained adding her family are in at state of shock.

‘When David heard the shootings he tried to escape. At first, he didn’t realise they were targeting him.

‘He knew he had been wounded but had to keep going. He told me he doesn’t even remember how he managed to drive and believes he fell in and out of consciousness until he found help. He is thankful to be alive but is suffering from moments of delirium as he relives the horror.’

One of the suspects who was shot during the rampage, was apparently abandoned by his accomplices and found injured near the scene by officers.

Identified by police as Daniel Hansmiller da Silva, 29, he was reportedly shot during cross fire by his own gang members and died after being taken to hospital.

Detective Willian Batista said: ‘From what we can see, the angle the bandits took as they unloaded their weapons, means that there was a real likelihood of being hit in the cross fire because they were standing in front of each other.’

Police found the victim’s cell phone, wallet and a replica airgun that shoots plastic pellets in his car. He is not under suspicion of being involved in any crime.

His family have transferred him to a private hospital where doctors said his condition is stable and after monitoring his health, they plan to operate to remove the bullets this week.

Detectives are still hunting the assailants and are examining security footage to identify those involved.