A man has been charged after a series of suspicious fires at an East Melbourne building housing the practice of a prominent solicitor who has acted for a number of underworld figures including drugs baron Tony Mokbel.

Police and firefighters were called to the Lansdowne Street property near Victoria Parade about 2.40am on Sunday after reports of a fire, with rubbish alight near a doorway and under the balcony. 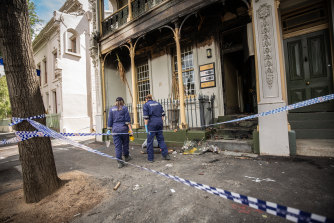 The terrace house, home to the legal practice of Stephen Andrianakis, "suffered moderate damage", according to a Victoria Police spokeswoman.

It is the third fire at the premises since late November, with police saying they are linked. No one has been injured.

Police arrested Ashley Parsons, 47, and charged him with three counts of criminal damage by fire, two counts of reckless conduct endangering life and three counts of committing an indictable offence while on bail.

Mr Andrianakis said Mr Parsons was a homeless man who lives in the neighbouring laneway.

"It's a sad case. Appropriate care is what people like that need," he said.

Mr Parsons was remanded to appear at the Melbourne Magistrates Court on December 22.

Mr Andrianakis has repeatedly acted as Mokbel's solicitor, including throughout his Court of Appeal hearing challenging a 30-year prison term for drug trafficking in 2013.

The prominent solicitor was also involved in the trial of John Higgs, who was jailed for 18 years in 2013 for his role in the failed importation of 15 million ecstasy tablets hidden in tomato cans – the world's largest ecstasy haul at the time, with a street value of $122 million.

On Sunday a spokeswoman for Fire Rescue Victoria said: "Crews arrived on the scene in less than five minutes and quickly extinguished a fire that had taken hold of rubbish near a door and under a balcony."