A man is in custody charged with threatening an Australian Federal Police officer who was travelling with Deputy Prime Minister Barnaby Joyce on a NSW highway.

“Police will allege the man verbally threatened an AFP officer and adopted a fighting stance during Friday’s incident,” the AFP said in a statement on Monday. 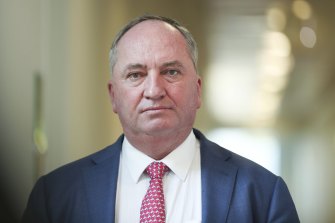 A man has been charged with threatening a police officer travelling with Deputy Prime Minister Barnaby Joyce on the federal election campaign.Credit:Alex Ellinghausen

The alleged confrontation occurred on the New England Highway between the regional cities of Armidale and Tamworth.

A 52-year-old man was arrested at his NSW home on Sunday by officers from Operation Wilmot, established “to help ensure the security of high-office holders and parliamentarians during the 2022 federal election”, the AFP said.

He was refused police bail and is due to face Tamworth Local Court on Monday charged with threatening to cause harm to a Commonwealth public official and failure to comply with bail conditions. The threat charge, if proven, carries a maximum penalty of five years’ imprisonment.

Detective acting Superintendent Jeremy Staunton said the AFP and its partners were “working tirelessly to identify and prosecute anyone who broke the law by harassing, menacing or threatening politicians, or those who worked with them”.

“The AFP supports political expression and freedom of speech,” he said. “However, when it leads to disruption, harassment, intimidation, threatening behaviour and damage to property, it can reach the threshold of a criminal offence.

“Politicians, candidates and the people who work with them should be able to do their jobs safely, and we will not tolerate criminal behaviour.”

On social media, Joyce said he had returned to his electorate of New England, in the state’s north, for what was a “fantastic couple of days back home”.

“Always humbling to walk the streets and say g’day to the constituents I’m fortunate to represent,” he said on Saturday.