A MAN who dragged his uncle's body to a post office to collect his pension yesterday puffed on a cigarette as he carried his coffin.

Tragic Peadar Doyle, 66, was laid to rest at an emotional service at the Church of the Holy Family in Askea, Carlow, Ireland, surrounded by heartbroken family and friends. 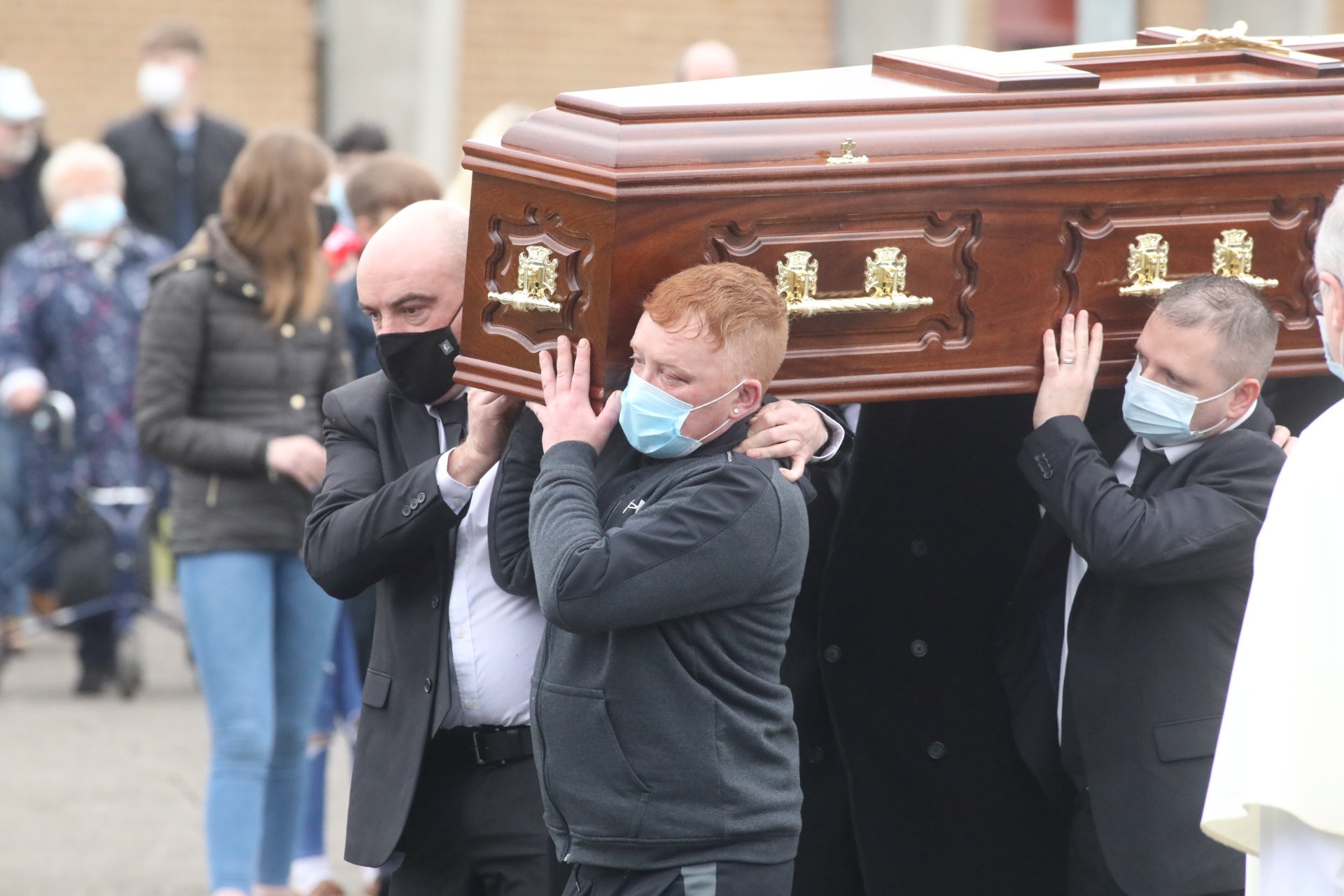 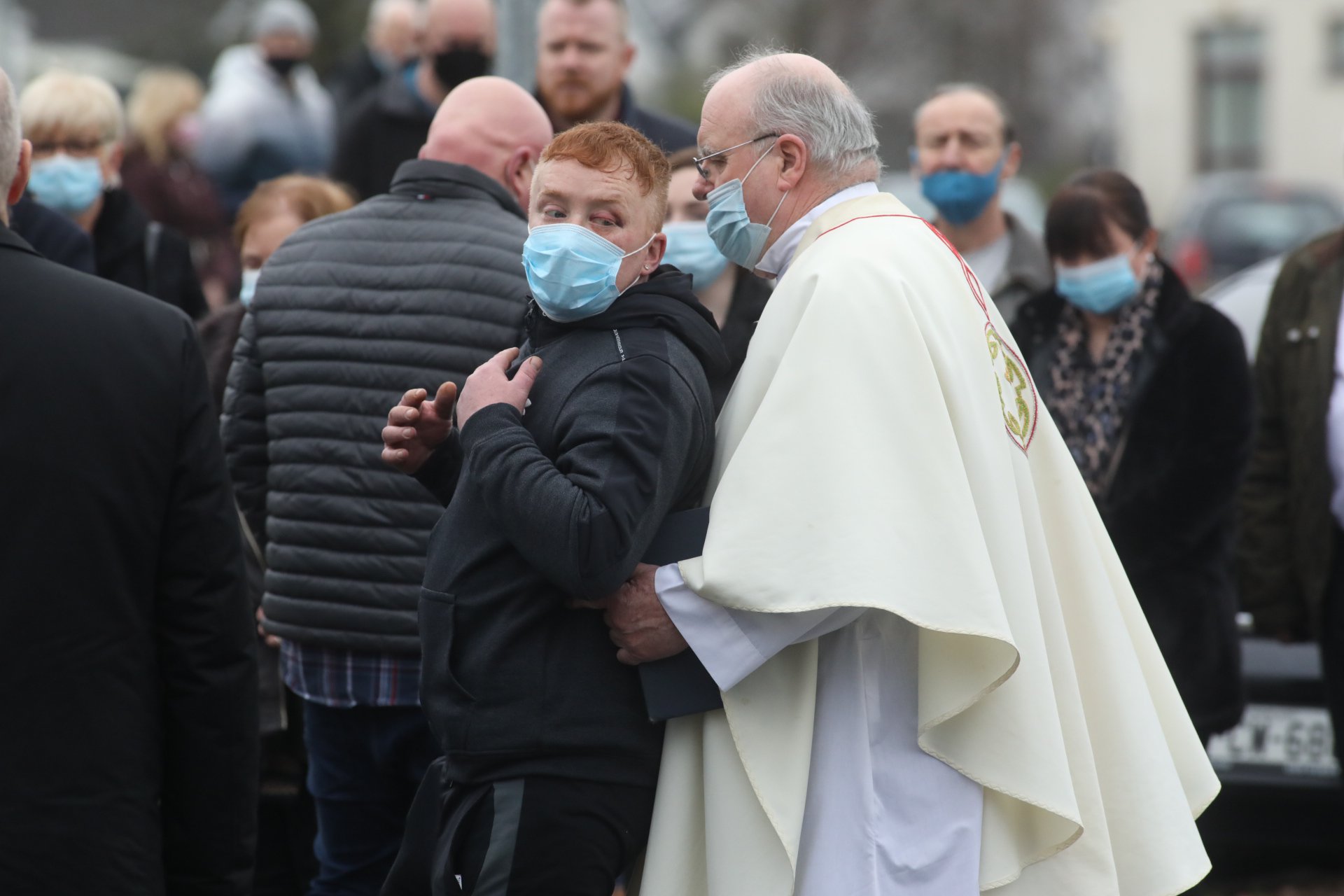 Among them was his nephew Declan Haughney who, with another man, propped Mr Doyle up at a Hosey's shop.

Declan, 40, insists that the duo did not realise Mr Doyle had died during the five-minute walk – to collect his pension – and he has been wrongly branded a killer.

He attended his uncle's funeral with a black eye and facial injuries after allegedly being attacked following the incident last Friday.

At the service, family members said they had been left "absolutely shattered" by the tragedy.

The 66-year-old was buried in the nearby St Mary’s Cemetery by his devastated family after the requiem mass.

Fr Tom Little, who led the funeral Mass, said: “It was a very dignified funeral. Some of the family spoke and paid tribute to Peadar.

“The family are absolutely shattered, shattered by it all.”

The churchman also took a swipe at online jokes about the incident.

Fr Little said: “Some of the ­coverage on social media has been shameful. It has been very hurtful for the family.

“Some people have made a laugh out of it, at the expense of the ­family. It has been very difficult and distressing for them.”

The pensioner was carried into a Hosey’s post office in Carlow by two men on Friday but a staff member at the shop immediately raised concerns about the man’s welfare.

The Sun understands the two men said the deceased was having a heart attack — before he fell to the ground and the pair allegedly left the post office to alert family members.

Police have spoken with both men, who deny any wrongdoing and insist Mr Doyle passed away as they helped him to the post office.

Officers have confirmed that Mr Doyle died of natural causes and no foul play is suspected.

However, as Peadar’s funeral was held, cops issued an appeal for witnesses who may have seen the OAP in the run-up to his death.

“I think the more important aspect is the human and the welfare aspect of it. (We want to establish) when exactly Mr Doyle died, was he in poor health prior to his death and what type of care did he get in the hours or the days prior to his death, as well by those who were responsible for him?

“So those are aspects to our investigation that we are anxious to pursue and I suppose from that perspective we know Mr Doyle was deceased in the post office last ­Friday.

“We know that he collected his pension himself the previous Friday but we are anxious to speak with anyone who spoke to him in the days in between then and last ­Friday to establish when he was out of the house last and when he was out and about. From that ­perspective that’s the appeal we would like to make.”

Supt Brennan also highlighted the horror ordeal faced by workers in Hosey’s shop, saying: “It was a hugely traumatic incident for the staff in the post office.”

He continued: “The post mortem has been completed and foul play has been ruled out in that he did not suffer a ­violent death. It’s the care he received in the hours and prior to (his death) that we are anxious to pursue.

“We have not defined the time of his death ­definitively. That can be quite ­difficult to establish and is difficult to pin down exactly.”

Funeral Director Rory Healy, who looked after Mr Doyle’s funeral, said: “The family are very upset over comments circulating online over the weekend.

"It’s a very sad case for the people of Pollerton (of Carlow) for the Doyle family, for his four sisters who are ­heartbroken and his other family members.

“They are very upset over the whole affair. I knew Peadar personally.

"I looked after his mother, his sister, his brother Lar who predeceased him and whom he lived with. I knew him when he was caretaker at Presentation College.”

You ran to him if you wanted to cry. And soon you would be dancing around the kitchen table.

Peadar’s niece Charmaine Dowling paid an emotional tribute to her uncle, describing him as a “quiet” and “kind” man who was a “hero” to his family.

At the end of the Mass, she said: “You ran to him if you wanted to cry. And soon you would be dancing around the kitchen table.”

Charmaine fondly recalled how Peadar would take her to feed his racing pigeons.

The grieving niece also highlighted the OAP’s love of music and how he enjoyed humming songs by Perry Como and Dean Martin and singing lullabies including Gilbert O’Sullivan’s Clair.

The Mass heard Peadar worked as a caretaker, a waiter and as a painter – and lent a hand decorating relatives’ houses, including Charmaine’s room when she was a 15-year-old.

Ms Dowling also revealed the pensioner revelled in quoting Shakespeare and enjoyed travel, including road trips in the United States.

The proud niece described Peadar as a quiet man in public but “in private he was a hero”.

Hailing Peadar as a “great man”, Charmaine declared: “His greatness was not known to many people but was to his family and closest friends.”

Councillor Fergal Browne told The Sun the Carlow community was “united behind” Peadar’s loved ones.

“I went to the funeral home to express my condolences before the coffin was taken down to the church. Peadar is remembered as a gentleman.”