Farm worker, 26, who chopped into his arm with a cleaver while decapitating pig carcasses sues Essex meat processing plant for £100,000 claiming he’s been left unable to use his hand properly

A farm worker who chopped into his arm with a cleaver while decapitating pig carcasses is suing an Essex meat processing plant for £100,000 after claiming the injury left him unable to use his hand properly.

Ramis Cjapi, 26, suffered the injury in 2017 and required surgery, but claims the ongoing effects have ‘ruined his life’.

He also says he has woken up ‘crying’ after being plagued by terrifying nightmares in which he sees his arm sliced open again.

He says he wasn’t properly trained to chop animals’ heads off and is suing former employer, Cheale Meats Orchard Farm, for up to £100,000, claiming the injury has prevented him playing rugby or kickboxing, and has severely impacted on his ability to work.

But while the company admits it was at fault for the accident, Mr Cjapi is being accused of ‘fundamental dishonesty’ by exaggerating the long-term effect of his injury.

Covert surveillance and social media posts showed him out socialising with friends, when he claimed that the injury prevented any ‘pleasurable activities,’ say lawyers for the company. 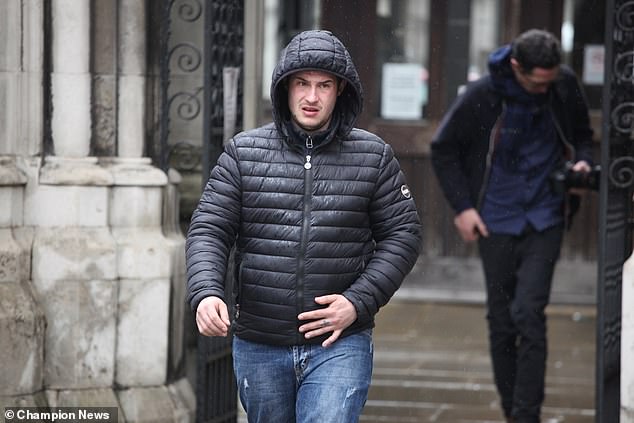 Ramis Cjapi, 26, was decapitating pig carcasses on a meat farm in Essex in 2017 when he accidentally chopped into his own arm with a cleaver

The trial at Central London County Court heard that Mr Cjapi had been working at the meat processing plant on the Brentwood farm in June 2017 when his accident happened.

Normally, his work entailed transporting carcasses, but on that day he had been tasked with decapitating dead pigs with a meat knife, his barrister Jonathan Brownson said.

‘The claimant was using a knife to remove the head from a carcass, a task for which he avers he was not sufficiently trained,’ he told Judge Christopher Lethem.

‘Whilst he was doing so, the carcass slipped and he sustained a deep laceration to the left forearm.’

He said medical experts agreed that Mr Cjapi had suffered a deep cut and a laceration to the extensor tendons to the middle finger and ring finger of his left hand.

The injury had left him with permanent scarring and restriction of use of his left wrist and ring and middle fingers, he said.

Giving evidence, Mr Cjapi said he had initially returned to work three months after the accident, but found it painful and left for good in February 2018.

Insisting he is ‘not a layabout’ and works when he can, he claimed that the accident had ‘ruined his life.’

It had left him unable to play rugby, having played at a semi-pro level before, or participate in kickboxing.

He had also been told by his doctors that he could not do heavy manual work, severely restricting his income as he had always done unskilled manual labour.

‘In the deep depths of my mind, I began to fear feelings of pain and discomfort,’ he told the court.

‘I had nightmares in the night where I dreamed I was cutting myself again.

‘I would wake up and see my arm cut and I was crying.’

Challenging the extent of the injury, Edward Hutchin, for Cheale Meats, said Mr Cjapi’s account had been ‘misleading, false and unreliable.’

Mr Cjapi says he wasn’t properly trained to chop animals’ heads off and is suing former employer, Cheale Meats Orchard Farm, for up to £100,000, claiming the injury has prevented him playing rugby or kickboxing, and has severely impacted on his ability to work

Although he did suffer an injury for which the company was liable, Mr Cjapi could have been back working in his job within a year, he claimed.

An expert had concluded that he had received the correct treatment and there was no reason why he should not be able to use his hand.

The barrister said evidence from social media and covert surveillance showed that he had ‘exaggerated’ the effect of his injury.

‘The impression of injuries severely restricting his lifestyle and preventing him from engaging in pleasurable activities, to the extent that they have destroyed his life, is not consistent with contemporaneous evidence of his activity during the period following the accident,’ he said.

Mr Cjapi had been seen riding a bike, opening and holding a bottle with his left hand and having a driving lesson, during which he performed a three-point turn.

‘It is clear from this evidence that he was able to carry out everyday activities without any evidence of the severe restrictions alleged by him,’ he claimed.

‘This is not consistent with his evidence in these proceedings and to the medical experts about his symptoms and the restricted mobility they allegedly caused.’

But for Mr Cjapi, Mr Brownson denied that social media posts proved he had lied in his evidence.

‘It is common for people to positively represent themselves via such platforms in a way which is unrealistic and out of step with reality,’ he said.

‘The mundanity of life is typically omitted from those posts…it is unsurprising that he does not reference ongoing pains and disabilities.

‘Social media posts provide nothing more than a snapshot into the lives of the owners of those posts.

‘It is unrealistic to expect that the claimant would have no social activity whatsoever as a result of his injury.’

After a two-day hearing, Judge Lethem reserved his judgment on the claim.