Man, 30, who crept into a Leicester university student’s room and raped her as she slept is jailed for seven years

A man who crept into a university student’s bedroom and raped her while she slept has been jailed for seven years and two months.

Mauro Eric Catamo De Oliveira, 30, met his victim while she was partying in Leicester city centre with her friends, before they invited him and his friend back to their home for more drinks.

Once back at the house, the victim left the group to socialise in the communal living area and went to her bedroom alone, where she fell into a drunken slumber, a court was told.

Richard Thatcher, prosecuting, said the victim was shocked and terrified when she woke to find the defendant sexually touching her in bed, before he raped her, in the early hours of September 28, 2016.

After being charged, De Oliveira, of no fixed address, fled the country to his homeland Portugal and failed to appear at Leicester Magistrates Court in May 2017.

He was extradited to the UK in June following a delay due to Covid and faced trial at Leicester Crown Court.

De Oliveira pleaded not guilty to sexual assault and rape, claiming the victim consented, but was found guilty by a jury. He admitted breaching his bail by going on the run.

He was sentenced to seven years and two months in prison. The two month sentence was given for failing to appear in court. 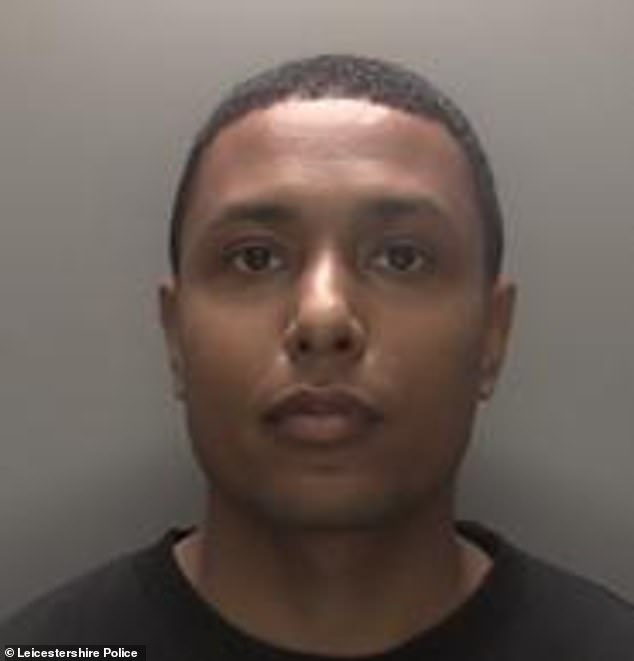 Mauro Eric Catamo De Oliveira, 30, met his victim on a night out in Leicester city centre. After being invited back to her house, he crept into the victim’s bedroom where she was sleeping and sexually touched her before raping her

Judge Philip Head said the victim woke to find an apparent stranger lying behind her in bed.

He said the victim was ‘bewildered and terrified’ when the defendant proceeded to have unprotected sex with her, despite her resistance.

The university student managed to escape from the bed and locked herself in the bathroom, where she messaged a friend for help while the defendant made off, the jury was told.

Judge Head said: ‘She was absolutely distraught and crying hysterically and was unable to speak for some time.’

In her confusion, the victim was convinced someone else had got into the flat and later said the defendant had not seemed ‘the type’ to behave in that way, the court was told.

Addressing De Oliveira, Judge Head added: ‘When arrested, you said she was an active and consenting participant until she suddenly changed her mind.

‘When you gave evidence, you said she answered your knock on her door and claimed she was completely naked.’

The judge said De Oliveira was ‘arrogant’ and ‘convinced of his own sexual charms’.

He added: ‘The jury concluded you decided to get sexual relief at her expense.

‘She was certainly asleep when you went into her bedroom.

‘She hadn’t given you the slightest indication or any encouragement.’

The judge added: ‘You remained in this country for several months, until you were charged and then fled, returning to Portugal.

‘A European arrested warrant was issued and you made it clear you weren’t prepared to return to the UK voluntarily.

‘The pandemic may have contributed to the delay, but if you’d agreed to return your trial would have happened well before the Covid-19 outbreak.

‘Your attempt to evade justice meant your victim has had this dreadful experience unresolved for many years and it’s been reawakened when she was just beginning to get on with her life.’

James Varley, defending, said De Oliveira was a man with no previous convictions, adding: ‘There’s little I can say about the facts.

‘He was 25 at the time. He went out at night and maybe drank too much and ended up in a flat with a bunch of other people – and we know what happened.

‘He spent 120 days [in custody] awaiting extradition that should count towards his sentence.’

Jailing De Oliveira for seven years and two months, judge Head told him: ‘The complainant and her housemates, all students in this city, went for a night out and in the early hours they met you and your friend in a bar and invited you both back to their flat.

‘Whatever might have been intended by the other women or your friend, the complainant had no sexual interest in you.

‘She then went to her room and fell deeply asleep and would have been affected by a substantial amount of drink she’d earlier consumed.

‘The general understanding was you’d sleep on the sofa in the communal living room.

‘You made your way uninvited into her bedroom.’ 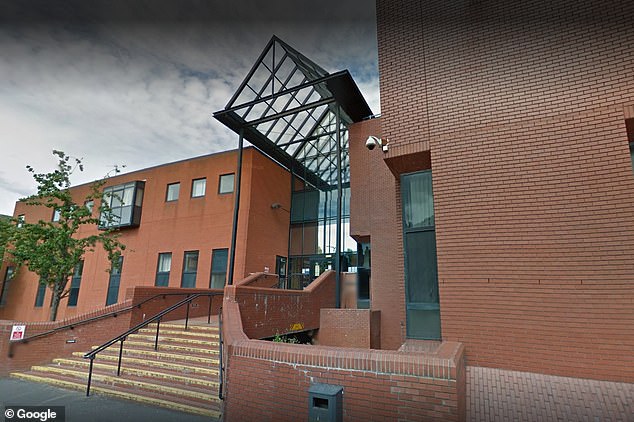 De Oliveira was found guilty of sexual assault and rape after a trial at Leicester Crown Court (pictured). He admitted breaching his bail by going on the run and was jailed for seven years and two months

Leicestershire Police said De Oliveira left the UK and flew to Portugal in May 2017 ahead of a hearing at Leicester Magistrates Court.

In March 2019, the force obtained a European Arrest Warrant and following a hearing at a Portuguese court in April 2020, permission was granted for De Oliveira to be flown back to the UK, a spokesman said.

But due to the pandemic, that process did not go ahead as planned and in June last year, De Oliveira was eventually flown back to the UK where he was remanded in custody, police said.

After the sentencing, detective sergeant Jamie Petchell, the investigating officer on the case, said: ‘De Oliveira tried everything in his powers to evade capture and despite knowing that his bail conditions prevented him from leaving the country, he did so.

‘We used the powers available to us under the EAW to bring him back to the UK and answer to his crimes. This was in no way an easy process with many hurdles along the way.

‘Understandably, given the amount of time that elapsed from the offences being committed to the trial (almost 6 years), this was a very stressful time for the victim.

‘It was surrounded by uncertainty as to when the defendant would return to the UK and when the trial would take place due to the Covid-19 restrictions.’