A manhunt is underway in Arizona for two inmates who broke out of a state prison Saturday night, with a reward of up to $70,000 for information leading to their capture, investigators said.

John Charpiot and David Harmon escaped from “medium custody” in the south unit of the prison in Florence, the Arizona Department of Corrections, Rehabilitation and Reentry (ADCRR) said in a statement on Sunday.

Charpiot was serving a 35-year sentence for molestation of a child and sexual abuse after being convicted in 2011. Harmon was sentenced in 2012 to 100 years in prison for kidnapping and second-degree burglary.

The two men were not accounted for during an 8:30 p.m. check on Saturday, the statement said. They were last counted at 4 p.m. earlier that day.

Officials said a preliminary investigation showed the men had cut through a fence using tools they got from a utility room in the prison, FOX10 Phoenix reported. They were able to enter the room by knocking out a wall-mounted air conditioning unit and going through the wall.

Charpiot and Harmon retrieved a bolt cutter, wire snips and other tools to breach the fence, the station reported. 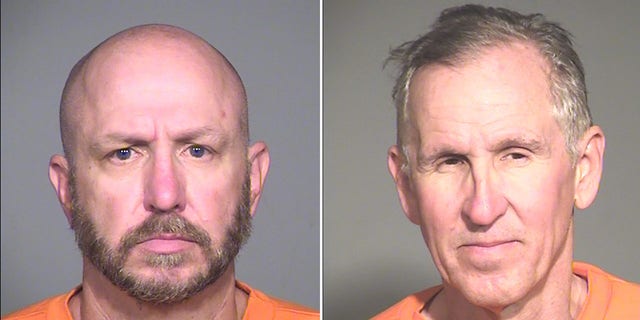 Charpiot, left, was convicted of child molestation and sexual abuse in 2011. Harmon, right, was serving a 100-year sentence after being convicted of kidnapping and second-degree burglary in 2012.
(Arizona Department of Corrections, Rehabilitation and Reentry)

“This is currently ADCRR’s top priority, and all available resources are being employed to the search effort,” the department said.

Dog units and other teams were working to track the inmates’ whereabouts, and conducting background checks to find anyone who may be associated with the men and want to help them, authorities said.

Gov. Doug Ducey tweeted that he and the U.S. Marshals Service authorized a $35,000 reward per escapee for information leading to their capture.

“Law enforcement will work non-stop to locate and apprehend them,” Ducey wrote.

Authorities asked anyone with information about the whereabouts of Charpiot and Harmon to call 911.