Map reveals how Covid cases are rising in EVERY borough of England amid BA.2-fuelled surge… but vaccines work just as well against strain as they do for Omicron and spiralling outbreak should PEAK before end of March, experts say

Covid cases have surged across every borough in England for the second week in a row, official figures revealed today as experts predicted the current wave could peak ‘before the end of this month’.

Cases have been spiralling for a fortnight on the back of the nation’s ‘Freedom Day’, which Health Secretary Sajid Javid insisted was ‘expected’. Climbing infection rates are also being blamed on an even more infectious version of Omicron, scientifically named BA.2, which is now behind three-quarters of cases in the country.

But Professor Paul Hunter, an infectious diseases expert at the University of East Anglia, predicted the resurgence would likely run out of steam before April.

He told MailOnline: ‘Covid cases will likely peak next week or the week after that, but likely before the end of this month. We should then see quite a rapid fall like in the Netherlands and Denmark.’

Experts have repeatedly said there is no reason to panic over the rising infection rates, saying there is no evidence the sub-variant is any more dangerous than its predecessor.

Despite statistics showing a clear uptick in Covid hospitalisations over the past fortnight, at least half are thought to be ‘incidental’ cases — those who test positive after being admitted for another reason, or beat the illness only to fall ill with something else. It may mean the recent rise in hospital admissions is more likely to reflect infection rates in the community, rather than severe illness.

Intensive care rates have barely budged and are still 15 times lower than seen during the darkest days of previous waves, with sky-high immunity rates and BA.2’s milder nature blunting the virus’s threat. 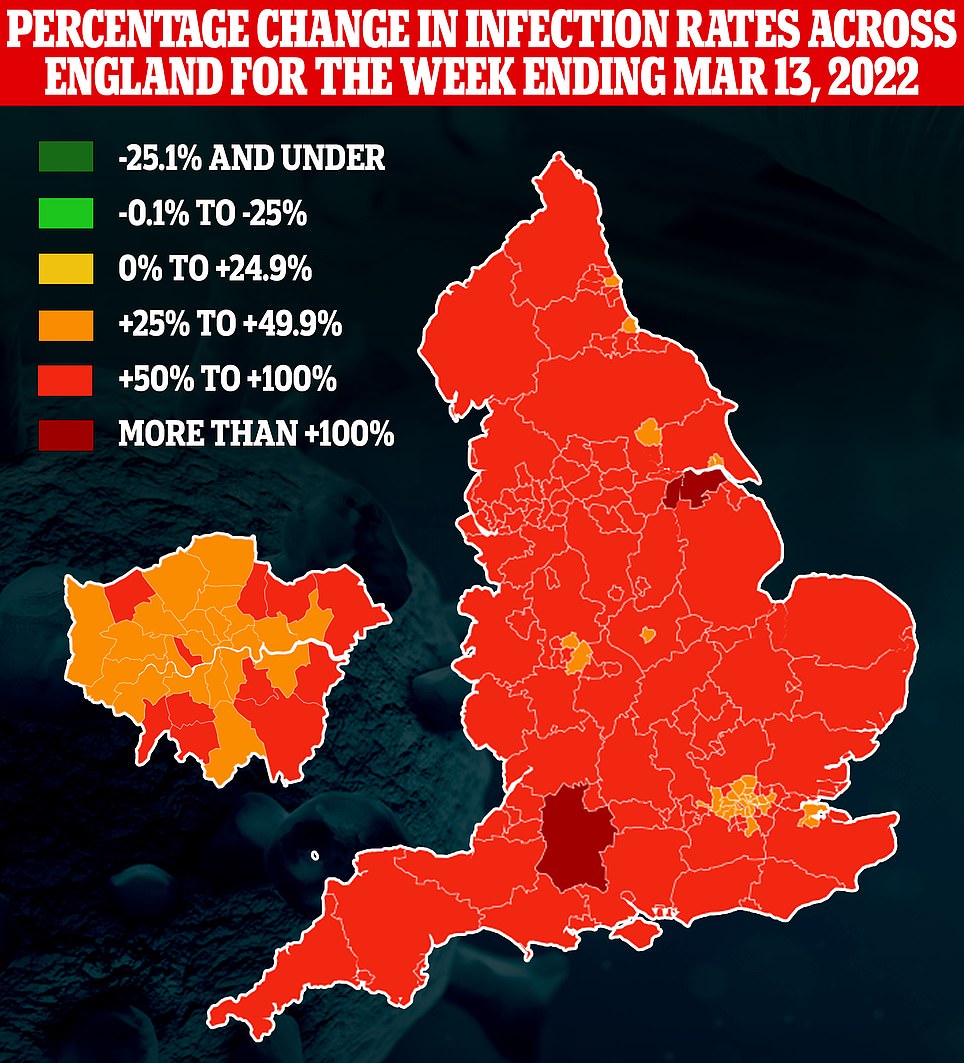 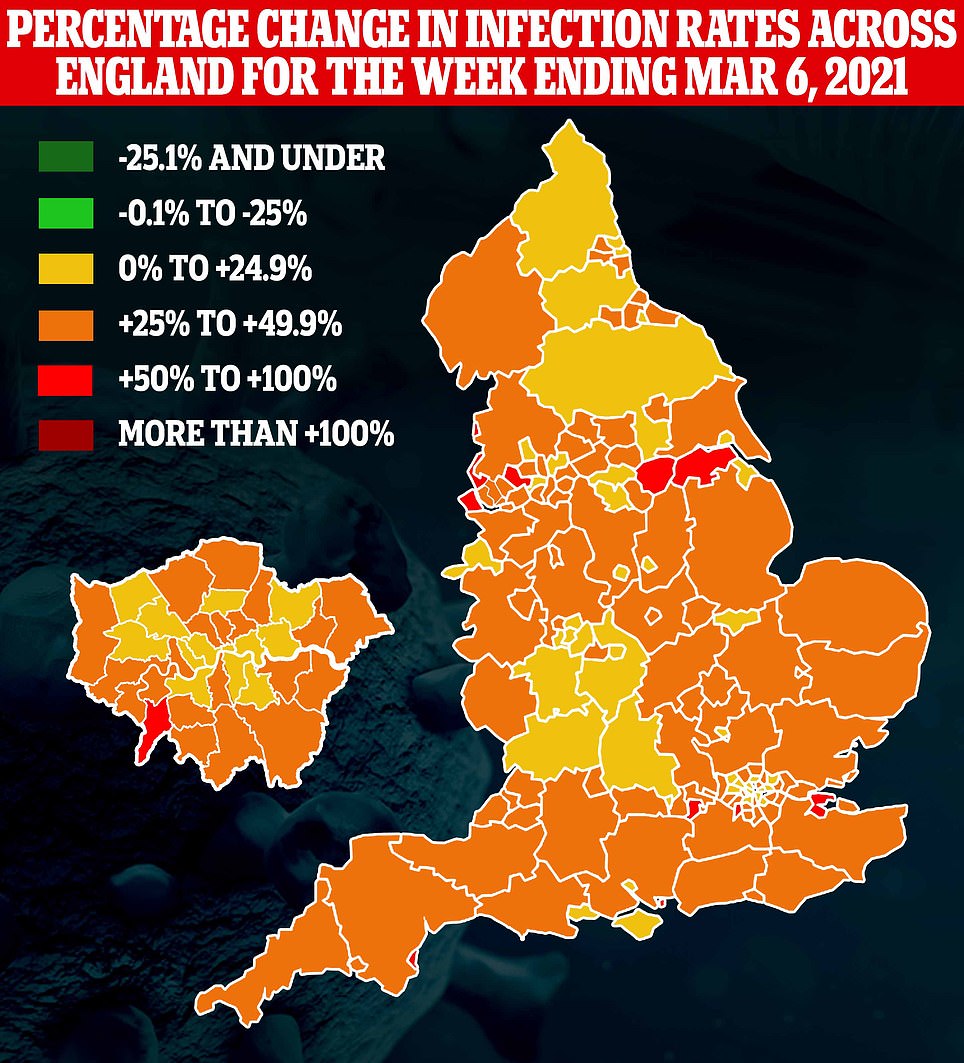 Government data showed cases have risen in every area of England for two weeks in a row (left). In eight in ten boroughs they rose by more than 50 per cent over the week to March 13 (red) compared to the previous seven-day spell, and in Wiltshire and North Lincolnshire (dark red) they doubled. This was a significant surge from the previous week

The rise of a more infectious version of Omicron, scientifically named BA.2, has been blamed for the uptick. It is the blue area above, and is now behind more than seven in ten infections. The light green is the Delta variant, from India, and the yellow is the old Omicron variant. Ministers have suggested surging infections could also be down to dropping all restrictions 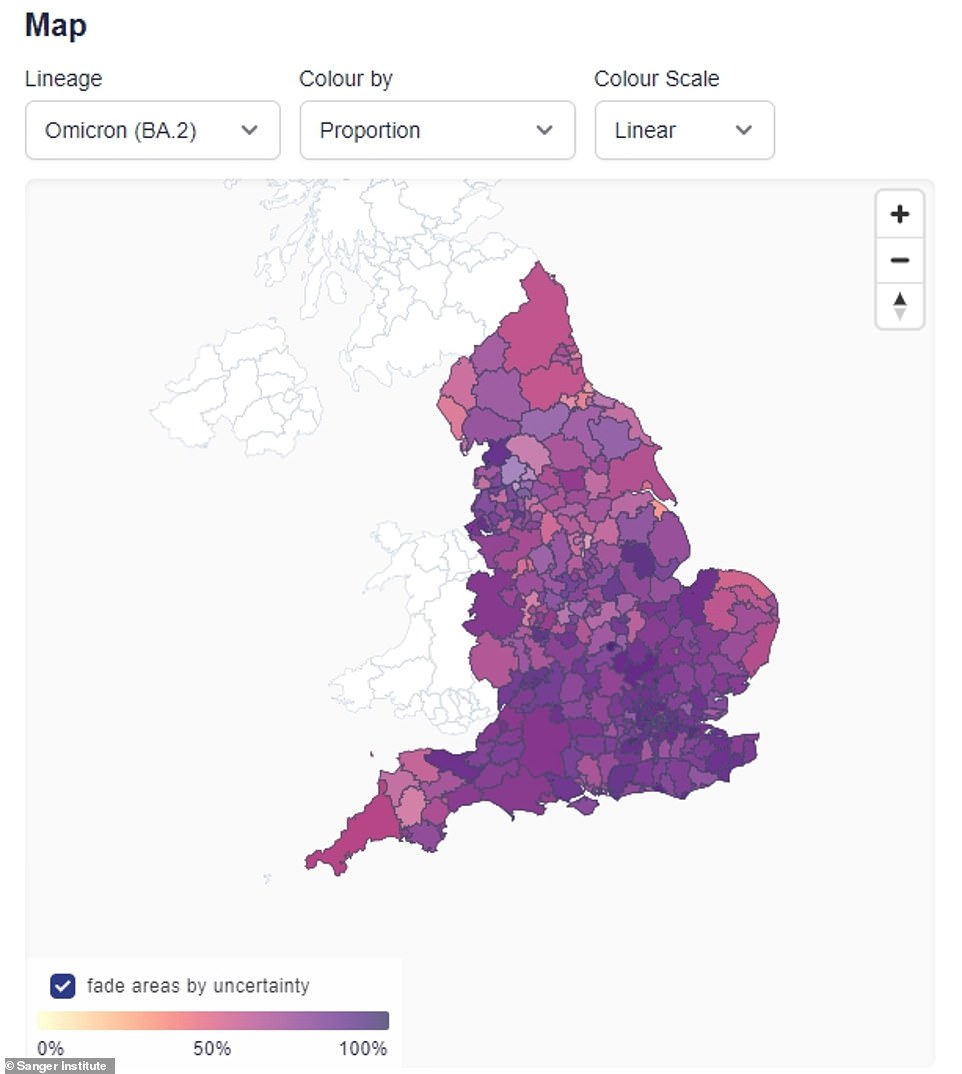 The above map shows the proportion of all cases triggered by BA.2 across England in the week to March 5, the latest available. The variant is now dominant across the country

Britain’s Covid booster vaccine programme is gearing up for another round of inoculations this autumn, the Health Secretary has revealed.

Fourth jabs will be dished out to all over-75s, care home residents and patients with weak immune systems from next week.

But Sajid Javid hinted last night that millions more may be eligible for top-up doses later this year, ahead of the country’s third Covid winter.

Grilled about the topic on ITV’s Peston programme, he did not specify exactly who would be invited in any roll-out this autumn. However, he admitted there may be a ‘need to give a lot more people a boost’.

Experts have speculated another inoculation drive this year could be expanded to include over-50s, effectively covering the same groups who will be offered a free flu vaccine on the NHS.

When asked if the booster drive would be widened to the general population, Mr Javid said: ‘I think at some point they will.’

He claimed the Government would follow the advice of the Joint Committee on Vaccination and Immunisation (JCVI), a panel of influential scientists that have guided No10 through their historic inoculation campaigns.

Mr Javid insisted the group had been ‘clear’, adding: ‘Their most recent advice is they think towards the end of this year, maybe in the autumn, there will be a need to give a lot more people a boost, an offer of a boost. But I’ll wait for that advice.’

Across England’s boroughs the biggest weekly surges were recorded in North Lincolnshire (up 106 per cent in a week), Wiltshire (up 101 per cent), Sefton (up 98 per cent), Dorset (up 97 per cent) and Cumbria (up 96 per cent).

Underlining the pace of the uptick in infections, the smallest week-on-week rise was the 27 per cent recorded in Hackney, followed by 31 per cent in Southwark and 33 per cent in Newham.

The surges were recorded even as the number of PCR tests carried out fell 30 per cent in a week to 600,000, and lateral flow testing fell 15 per cent to 1.3million.

Professor Hunter said the rise was ‘largely down’ to BA.2 but that it was not the only driver.

He told MailOnline: ‘The rate of growth in BA.2 has increased since March 1, and the rate of decline of the other Omicron variants has also slowed.

‘This is probably [also] down to relaxing the remaining restrictions a bit too early. Either directly as a result of the relaxation or indirectly from people mixing more.

‘Respiratory viruses like Covid always spread more rapidly during autumn and winter and it would probably have been better in my view to wait till the end of March when we are into spring.’

Asked when the wave might peak, he said this was likely to be ‘fairly soon’ followed by a rapid decline similar to that seen in Denmark where the sub-variant was dominant weeks ago.

Despite cases plunging in both Denmark and the Netherlands, deaths have yet to follow suit. Experts have argued that a large share are incidental, however.

BA.2 was behind 75 per cent of Covid cases over the week to March 5, according to the latest available data from the UK’s largest Covid surveillance centre the Sanger Institute. This is a jump from 58 per cent the week before.

Yet latest UKHSA figures suggest the sub-variant — thought to be as infectious as measles — was behind 83 per cent of Covid infections last week.

Experts have repeatedly said there is no reason to be concerned because there is no evidence that the variant is more dangerous than the old Omicron, which never overwhelmed the NHS. 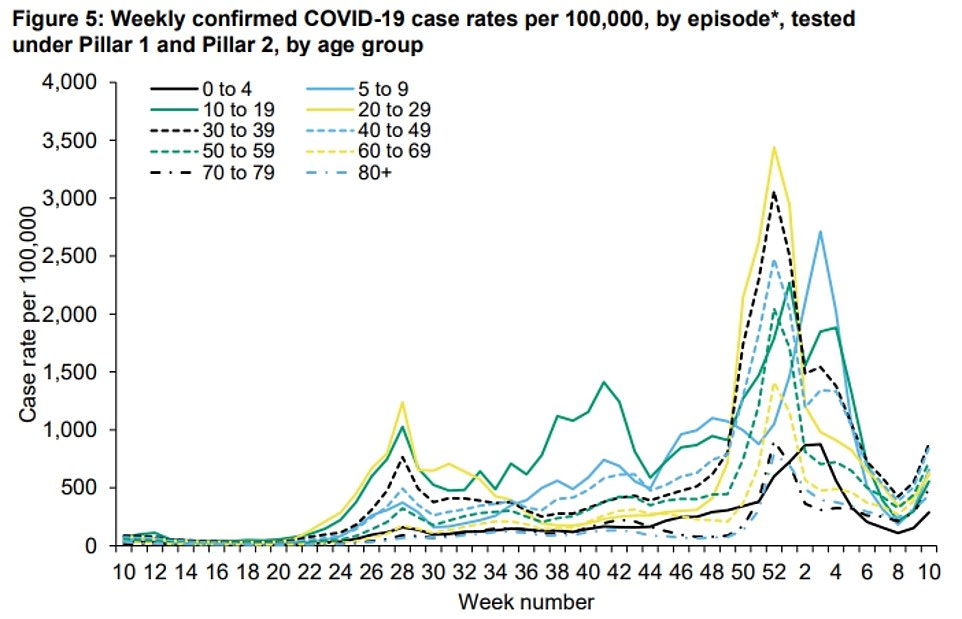 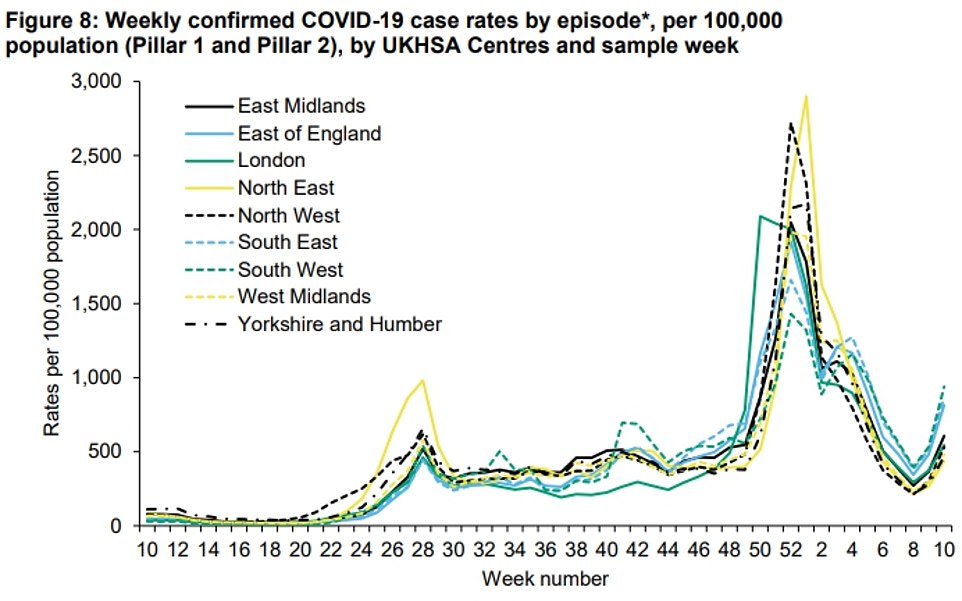 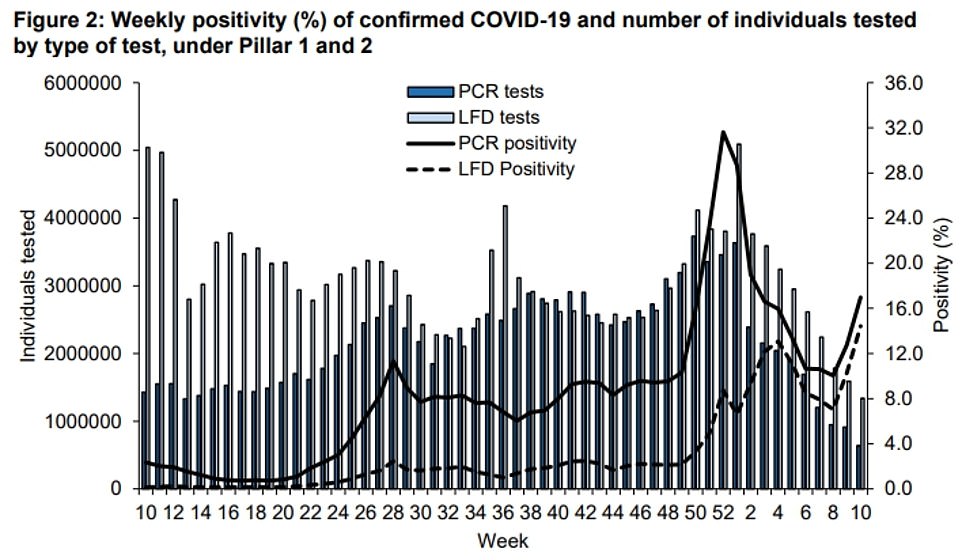 This was despite the number of lateral flows carried out falling by 15 per cent in a week, and the number of PCRs dropping by 30 per cent over the same time period 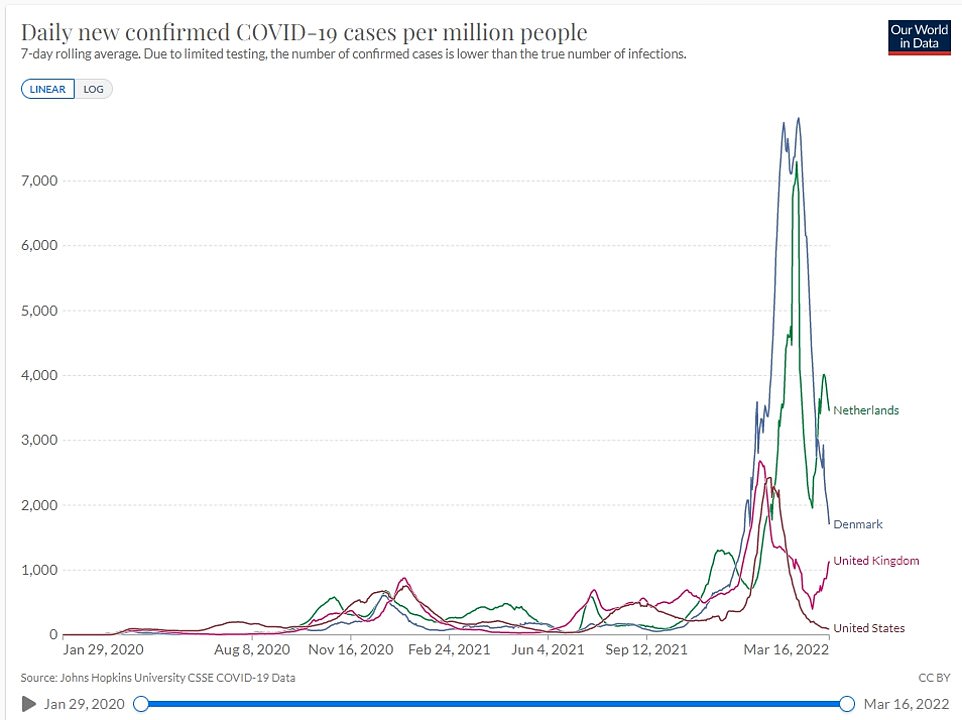 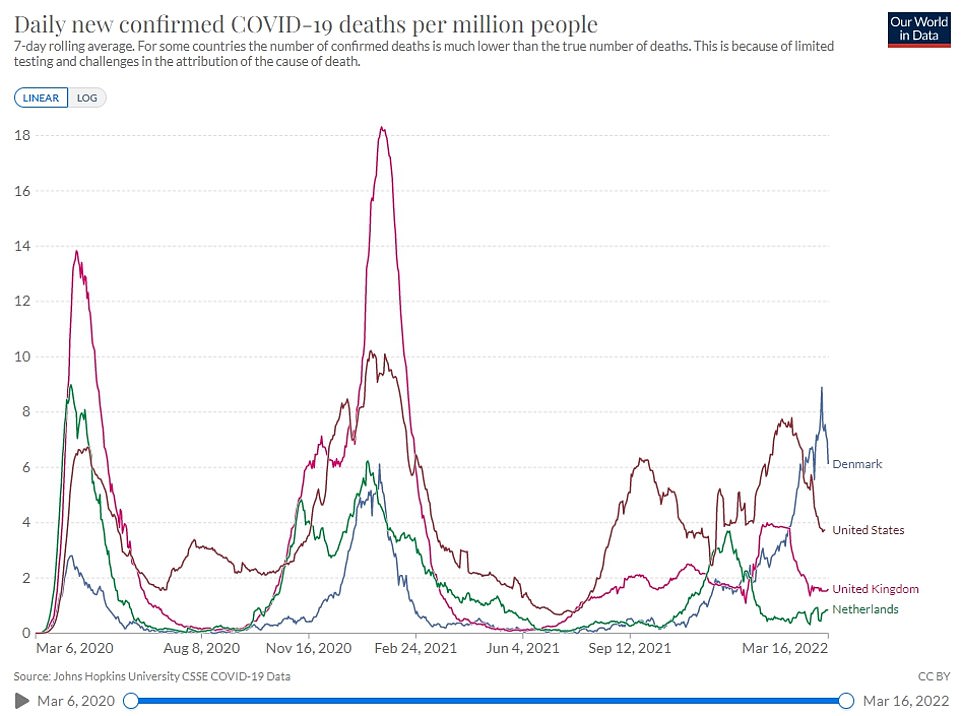 Despite cases plunging in both Denmark and the Netherlands, deaths have yet to follow suit. Experts have argued that a large share are incidental, however 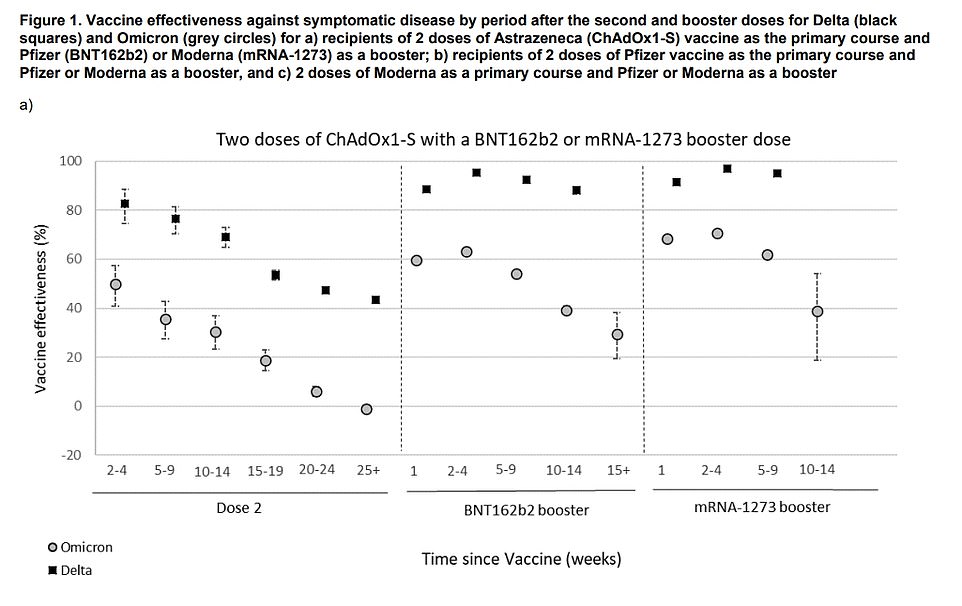 The above shows vaccine effectiveness against symptomatic disease with Delta (black squares) and Omicron (circles) after two or three doses of the Covid vaccine. It reveals protection gradually wanes as ministers prepare to dish out boosters to the most vulnerable people 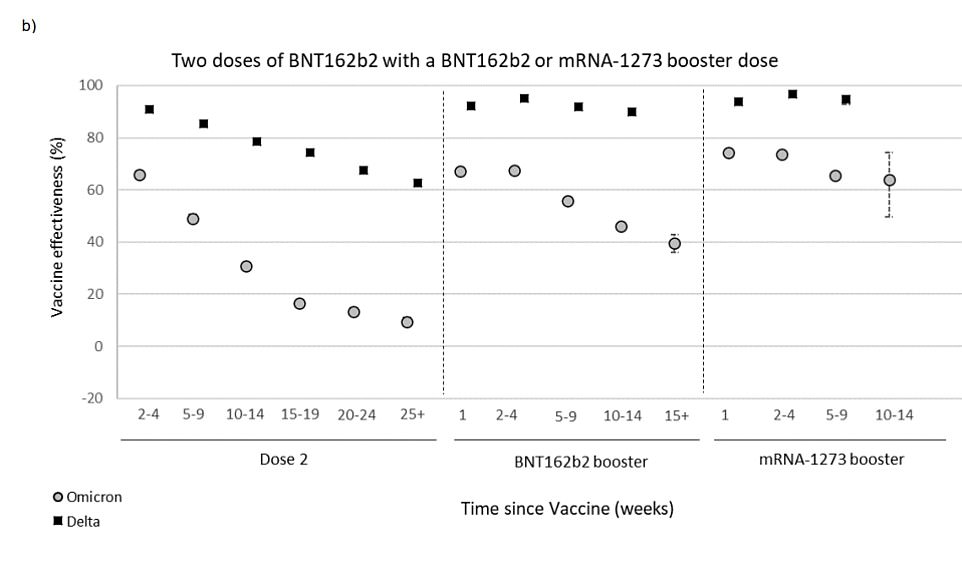 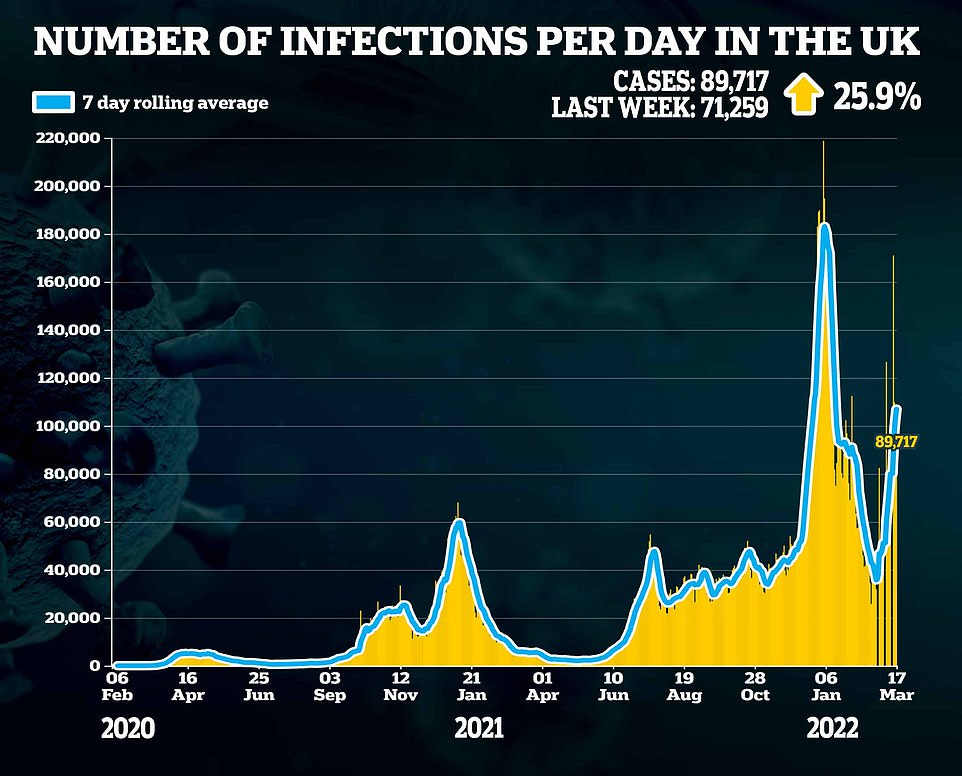 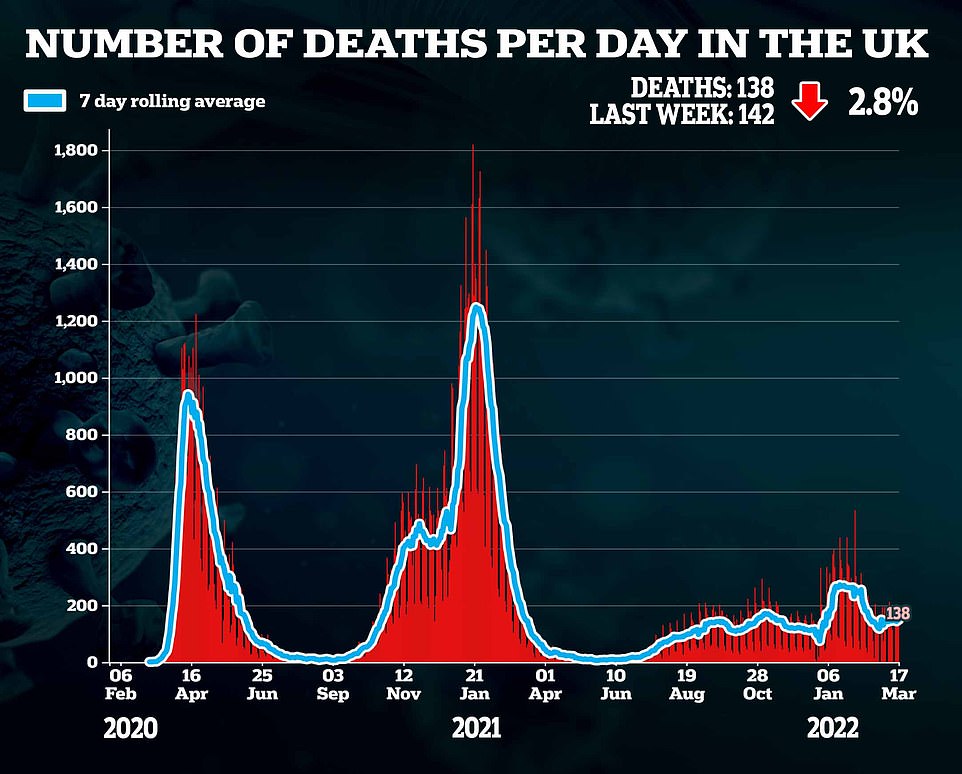 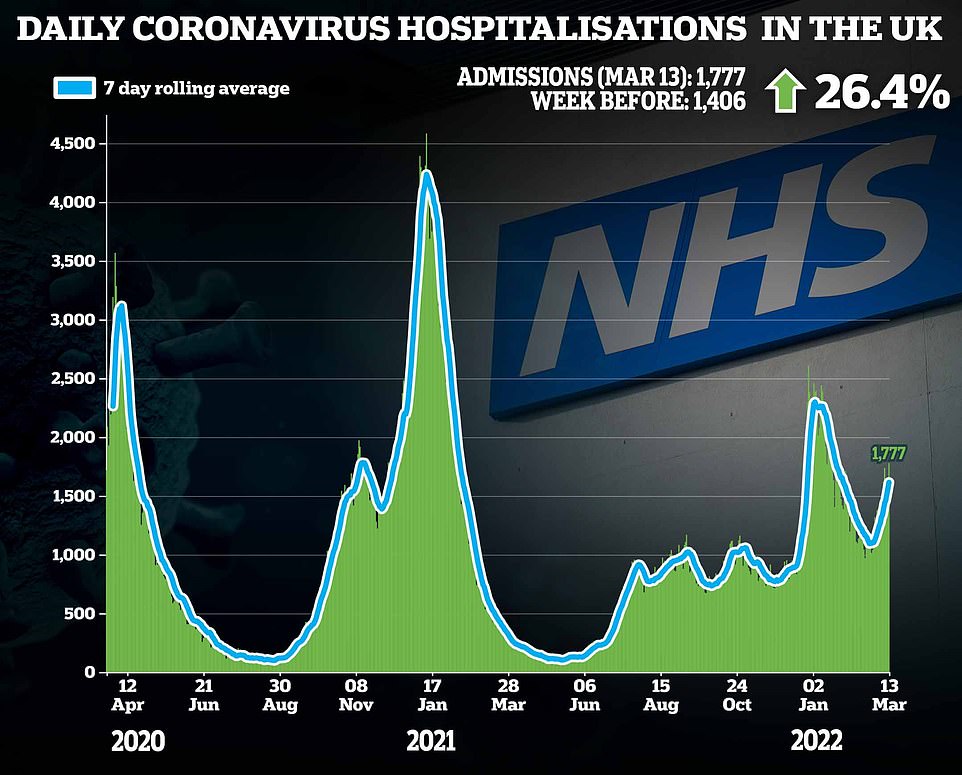 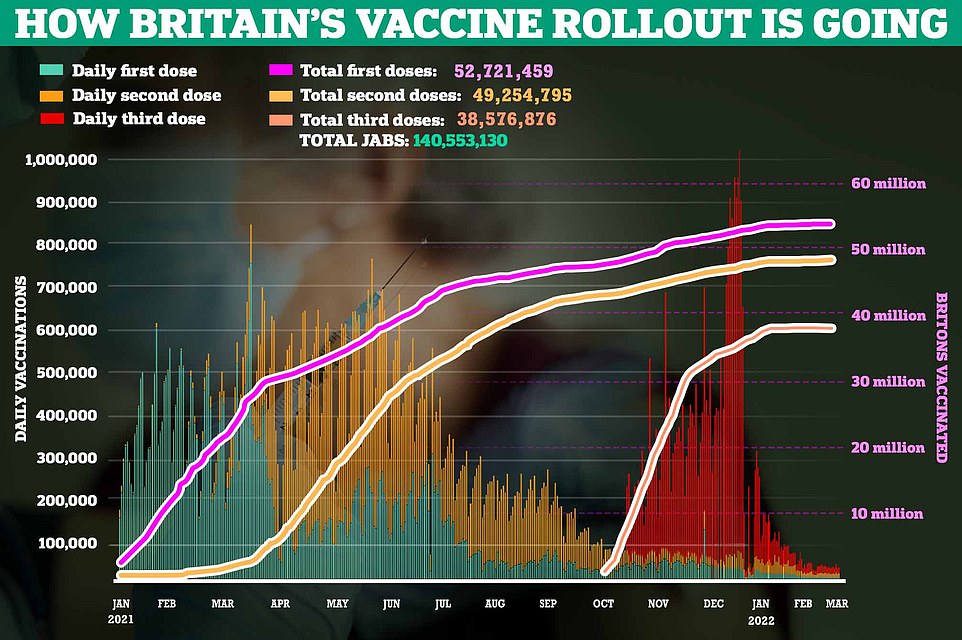 The UKHSA’s weekly vaccine report showed vaccines were still 40 per cent effective at preventing symptomatic Covid infection among people who got AstraZeneca’s jab and then a booster up to 15 weeks ago.

For those who got Pfizer for their first and second dose followed by a booster effectiveness against symptomatic infection was around 60 per cent.

Vaccines remained up to 90 per cent effective against hospitalisation triggered by the virus, the report said.

It comes as the NHS prepares to roll out fourth doses to over-75s, care home residents and the vulnerable next week.

And in the strongest hint yet that the UK is gearing up for another round of Covid inoculations, Sajid Javid hinted last night millions more may be eligible for top-up doses this autumn.

Grilled on the topic on ITV’s Peston programme, he did not specify exactly who would be invited in any roll-out in six months time, but admitted there may be a ‘need to give a lot more people a boost’.

Experts have speculated another drive is likely to include all over-50s, effectively covering the same groups as those that would be offered a free flu jab on the NHS.

When asked if the booster drive would be widened to the general population, Mr Javid said: ‘I think at some point they will.’