Retired Marine Corporal on Kabul drone strike: Shows we have a leader who is a ‘complete failure’

A U.S. Marine killed in the suicide bombings at Kabul airport during the chaotic withdrawal from Afghanistan was memorialized back home on Saturday.

The coffin of Lance Cpl. Kareem Grant Nikoui, one of 13 American service members killed during the blasts, was laid out in Riverside, California, for family and those who wished to honor his service. 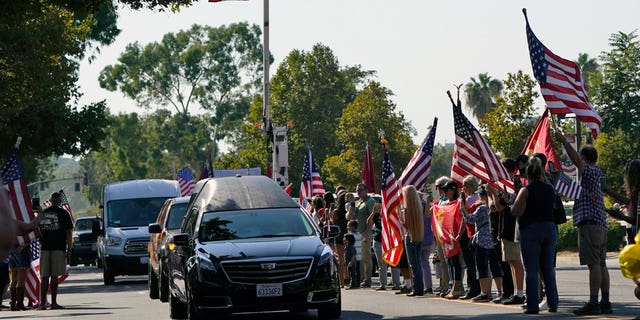 Hundreds attended the memorial service at the Harvest Christian Fellowship for the 20-year-old Marine who died during the effort to evacuate Americans and Afghans from Kabul on Aug. 26, amid the rapid Taliban takeover of the war-torn country.

The attack also took the lives of 10 other Marines, a U.S. Navy corpsman, a U.S. Army soldier, and over 100 Afghans. Another one of the fallen Marines – 22-year-old Cpl. Hunter Lopez – was also from Riverside.

Fellow service members and heartbroken friends and family waited in line for the opportunity to honor Nikoui’s life, placing their hands on the flag-draped coffin.

Nikoui’s sister, Shyler Chappell, spoke at the service on Saturday, saying she learned that in her brother’s final moments he went back inside of the Kabul airport to try to save three families, according to KTLA.

“It didn’t surprise me that those were his last moments, as he had sent our family group chat videos of him talking to the children there,” she said.

On Friday, thousands of people lined the streets of Norco as Nikoui’s coffin was taken from Ontario International Airport to Crestlawn Mortuary in Riverside, according to local reports.