A police officer who drunkenly groped two colleagues at a work Christmas party has avoided jail but has been ordered to sign the Sex Offender Register.

Gareth Duggan, 38, grabbed the bottom of one officer and put his hand underneath the dress of another as they were celebrating the festive season at a nightclub in Chester last year.

Despite a reputation as a rumoured predator, the shocked victims were accused of making up the allegations to get a promotion when they reported the incident.

Duggan was sentenced to a 32-week suspended sentence and ordered to complete 200 hours of unpaid work and 35 days of rehabilitative activity after admitting two counts of sexual assault at Warrington Magistrates’ Court. 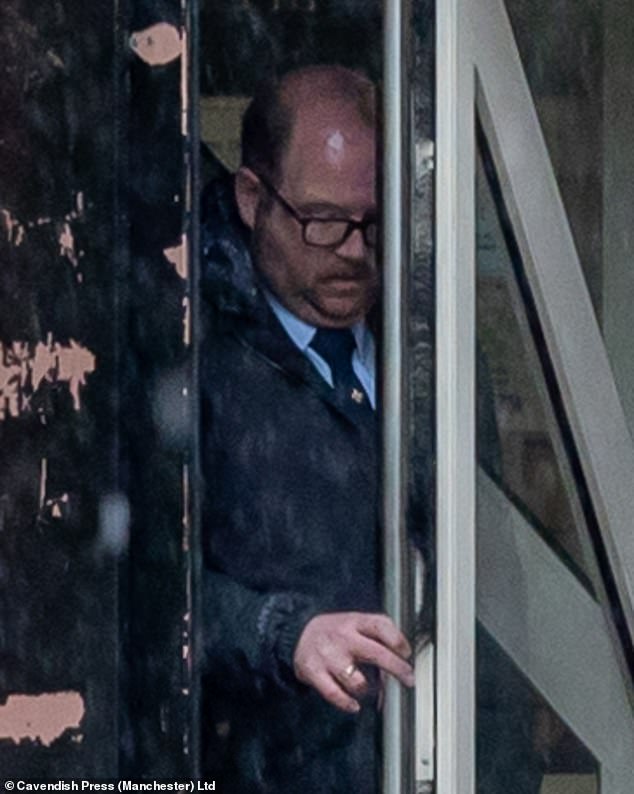 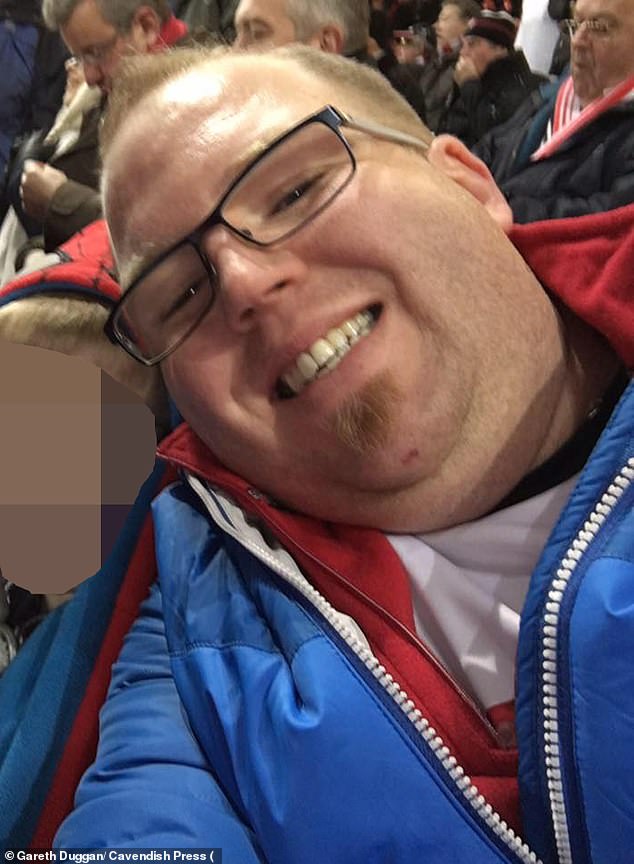 He will also sign the Sex Offender Register for seven years and pay each victim £1,000 compensation.

Duggan is expected to resign from the police force before a disciplinary meeting in January, at which he expects to be fired.

He had been a police officer with the North Wales force for 15 years when the incident happened in Revolution night club in Chester.

Alex Morgan, prosecuting, said the Christmas party had brought police officers from a number of areas together.

‘During the time in the bar the defendant touched the bottom of one of the complainants and the touching was deemed to be sexual. Prior to that the defendant had put his arm around her waist which made her feel uncomfortable.

‘A short while after the defendant stood between her and another female.

‘She was shocked as a result of the incident and kicked out at his ankle with her foot to get him to stop.

Mr Morgan also described a second attack on another colleague that happened during the party.

‘Her colleague also recalled a sexual assault from the same night out. He held onto her for what seemed like a long time and squeezed her waist making her feel very uncomfortable.

‘She told him to stop on a number of occasions. She made it very clear she was not joking.

‘As he had his hand around her waist he put his face up to her neck and made kissing noises. His hand then went between her legs and underneath her dress and touched her vagina over clothing,’ the prosecutor said.

‘His hand brushed across the cheek of her bottom in the area of her vagina. She was not wearing any tights or leggings at the time but did have underwear on.

‘It made her extremely upset and uncomfortable.’ 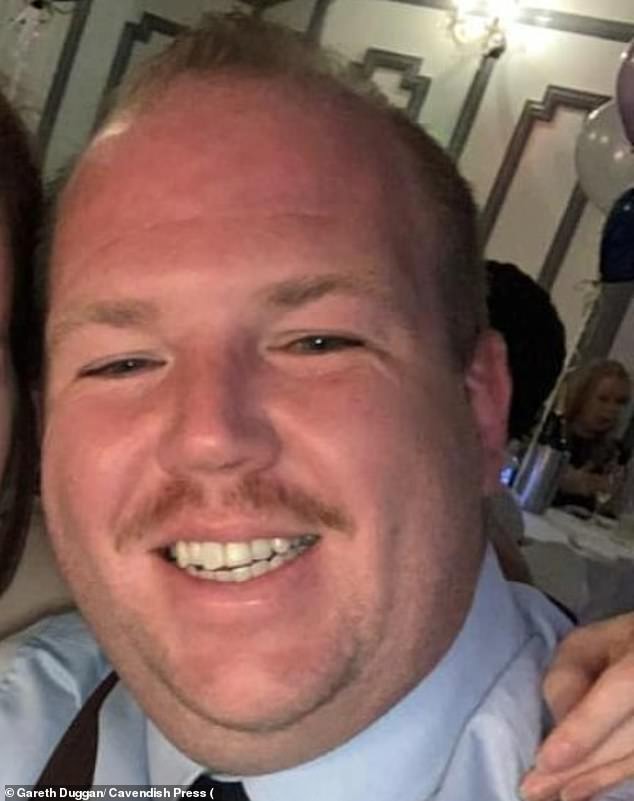 Each victim will receive £1,000 in compensation after being groped by a drunken Duggan at a festive gathering last year 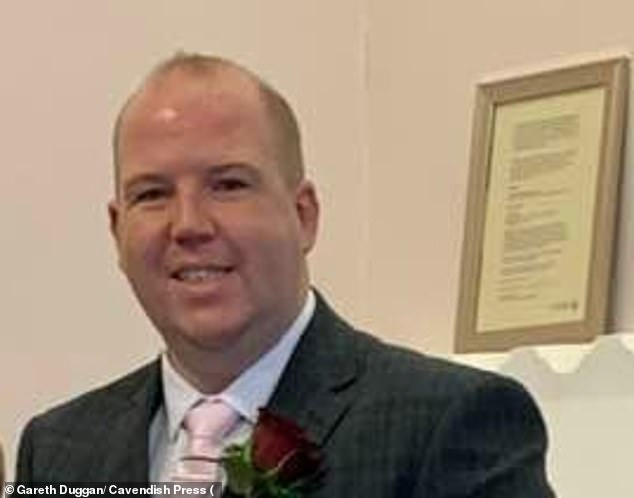 His wife and the two victims were watching from the public gallery.

In a statement one of the women – a detective who deals with rape victims – said: ‘When he put his arm around me I was shocked but when he touched me in that way I was disgusted. I didn’t know what to do. I wanted to tell someone but I didn’t want to ruin everyone’s night.’

The detective said she always encouraged sex assault victims to make complaints but she now knew how ‘draining’ it was to do so.

She also claimed there were rumours amongst fellow officers that Duggan was a predator and had previously assaulted someone – but she never thought it would happen to her.

Angered that Duggan had received a full year on a sergeant’s pay following the attack, the victim said she wished there had been a trial so that she could have had her say.

‘It seems unfair. Ultimately, I am glad that a sexual predator like Gareth Duggan is no longer in the police. It is an honour to serve in the police force.’

In mitigation for Duggan, defence lawyer Daniel Weed said the officer had been suffering from PTSD from harrowing events he had dealt with during 15 years of front-line policing.

‘Front-line policing is not a pretty environment at all. That does impact on the individual. For anyone that would have had an impact on their mental health.

Mr Weed said Duggan had ‘disgraced himself’ and accepted that he would be sacked at the misconduct hearing in January.

Mr Weed told the court that as well as well as losing his job, along with his £2,100 monthly income, Duggan’s wife had also been impacted.

‘He is a very lucky man to have someone willing to come to court with him and be his wife, she sees some good in him,’ the solicitor said.

‘He is a disgraced man, a broken man. It would break him more by sending him to prison.’ 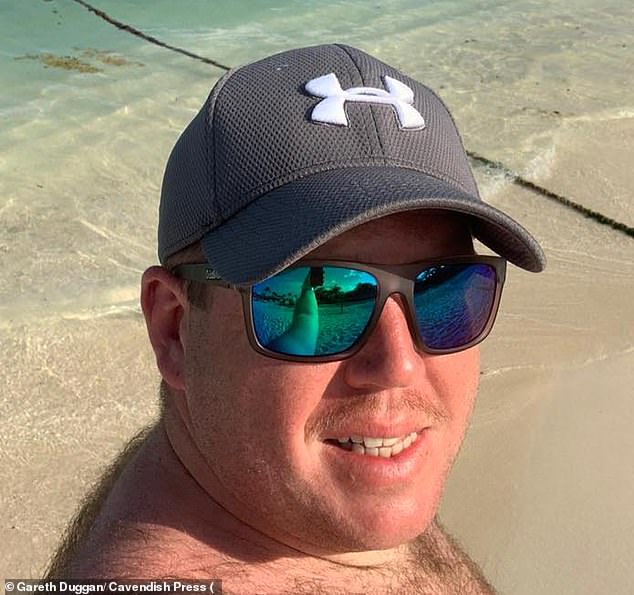 Duggan was also ordered to complete 200 hours of unpaid work and 35 days of rehabilitative activity with the probation service and he will sign the Sex Offender Register for seven years.

District Judge Jack McGarva told him: ‘You are a police officer and the public and your colleagues are entitled to look at you as an example and someone they can trust. You completely failed them. Any punishment must reflect that police officers should be beyond reproach.

The judge emphasised the case of PC Wayne Couzens as an example of some of the ‘pretty bad things’ police officers have done over the past years.

Judge McGarva highlighted the impact of the assault on the victims and said Duggan’s drunkenness did not provide an excuse.

‘I have to bear in mind this conviction will have a big impact on you and your family. But let’s not forget that other people were hurt by you. This was not a fleeting kind of touch. It was quite significant in both cases. It’s more than brushing against someone in a sexual way.

‘It was very significant contact which will probably live with them for the rest of their lives. They will never forget how horrible the horrible feeling was.’

‘It is right that you have experienced some pretty awful things in life as a police officer but how many thousands of police officers in Wales have been through these sorts of things and have not behaved like this? It does not make you behave like this.

‘Something very wrong has made you behave like this,’ the judge concluded.