A former Melbourne businessman, who was the subject of a money-laundering investigation in Singapore and owed more than $16 million to the Australian Tax Office, has died in Azerbaijan.

Simon David Allen died in early September in Baku, the capital of Azerbaijan, before he was cremated about six weeks later in the English city of Leicester, where he was born and where his elderly mother still lives. 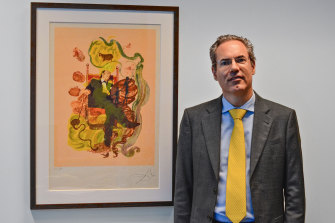 Simon David Allen, chief executive of APT Capital Management, who died in Azerbaijan in September after fleeing investigation in Singapore and Australia.

Described as impeccably dressed and a member of the Hillsong Church in Melbourne, the 51-year-old was considered otherwise unremarkable by former employees.

The Age has been unable to confirm the cause of Mr Allen's death, but mourners at his funeral on October 8 were told he had succumbed to COVID-19 complications, while a former associate claimed he had taken his own life.

His death in the former Soviet outpost on the Caspian Sea leaves many unanswered questions amid allegations of fraud and a string of angry creditors, including former friends and employees of his funds management business.

Mr Allen founded APT Capital Management in Melbourne in 2009, with the company first registered to a nondescript townhouse in Murrumbeena. 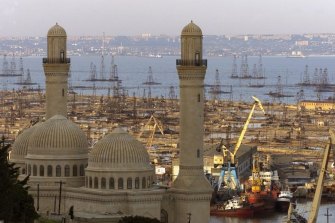 At the time of his death, Simon David Allen was living in Baku, the capital of the former Soviet state of Azerbaijan.Credit:Reuters

By 2014, Mr Allen had leased premises at 101 Collins Street and established offices in Hong Kong and Singapore.

Mr Allen told clients his firm offered the best investment opportunities across the Asia Pacific region, but he also spent significant periods of time in the Cayman Islands and the Russian city of St Petersburg.

A former employee said he always travelled in business class and lived an extravagant lifestyle.

Mr Allen relocated to Hong Kong with his wife and young child in about 2016, according to corporate records. About the same time, the Australian Tax Office began to audit his business affairs.

In 2018, Singapore authorities froze the trading accounts of APT Capital Management as part of an anti-money-laundering investigation, according to several former staff who claim they were never paid by Mr Allen, or had to threaten legal action.

As his business collapsed, Mr Allen abruptly moved his family to Azerbaijan in 2019.

The outcome of the money-laundering investigation has never been revealed, with the Monetary Authority of Singapore declining to respond to questions from The Age.

“Neither APT Capital Management nor Mr Simon David Allen are regulated by MAS. We do not have further information on Mr Allen or his company,” a spokeswoman for the Monetary Authority of Singapore said.

A spokesman for the Hong Kong Monetary Authority also declined to comment, other than to say Mr Allen's investment company also fell outside its regulatory jurisdiction.

However, a liquidator's report into the collapse of another company owned by Mr Allen raises serious fraud allegations and also reveals he owed $16,001,520 to the Australian Tax Office.

The report by Pitcher Partners refers to documentation from the Deputy Commissioner of Taxation that accuses Mr Allen of using a gift importation business called Multivate Pty Ltd to facilitate a "sham operation" with its ultimate holding company APT Capital Management.

A search of Mr Allen's assets in Australia uncovered a Westpac account that was overdrawn by $22, while a former secretary in Melbourne was still owed $12,000 in unpaid wages.

The liquidator report identified eight potential breaches of the Corporations Act, which were reported to the Australian Securities and Investments Commission in August 2019.

An ASIC spokeswoman declined to comment when contacted by The Age.

The ATO also declined to respond to questions about Mr Allen, citing its "obligations of confidentiality under the law".