Melbourne was treated to a series of intense but short-lived showers on Friday afternoon after predicted flooding and wild winds failed to materialise.

The Bureau of Meteorology told Victorians to batten down the hatches in preparation for an severe weather event, with heavy rain and damaging winds forecast for Friday.

But by 2.30pm, the bureau said the worst has likely passed, though some late showers could still move through the state. 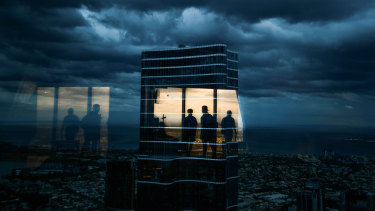 Storm clouds roll over the Eureka Skydeck in Mebourne on Friday.Credit:Joe Armao

“It’s likely that we’ve already seen the worst of it but there’s definitely a chance that we’ll see some storms pop up in the remainder of the afternoon,” Mr Stoney said.

“It’s not a lot because even though the storms are heavy, because they’re moving quickly and don’t linger, there’s not much time for a given location to accumulate much rain.”

While the CBD was showered with just 1.6 millimetres during the heavy showers, Kororoit Creek in the outer north-west was dumped with six millimetres of rain, Laverton five millimetres and Fawkner, in Melbourne’s north, four millimetres, since 9am. 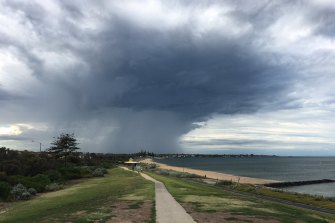 The view at Point Ormond in Elwood on Friday morning.Credit:Andrew B. Watkins

Winds also gusted to a top of 80km/h at Melbourne Airport at 11.30am, while Mount Hotham in the Victorian Alps recorded winds of 107km/h just after 10am.

Mr Stoney said that while Melburnians should keep their brolley at the ready in case some rain returns, by 3pm the clouds should have cleared the Mornington Peninsula on their way to Gippsland by the late afternoon.