The son of Formula One legend Michael Schumacher is preparing for his race debut tomorrow as he carries on his father’s legacy.

Mick Schumacher first took to the circuit in Bahrain yesterday, during the first two practice sessions of the new F1 season in his Haas car.

In qualifying on Saturday, Mick finished 19th in an uncompetitive car but was more than seven tenths of a second faster than his fellow rookie teammate Nikita Mazepin.

The sessions marked the return of the Schumacher name nine years after the German retired with seven world titles and three decades since his debut at the 1991 Belgian Grand Prix at the same age as his son today-22.

Mick’s father has not been seen in public since 2013 when a skiing accident in the French Alps left him with devastating brain injuries. 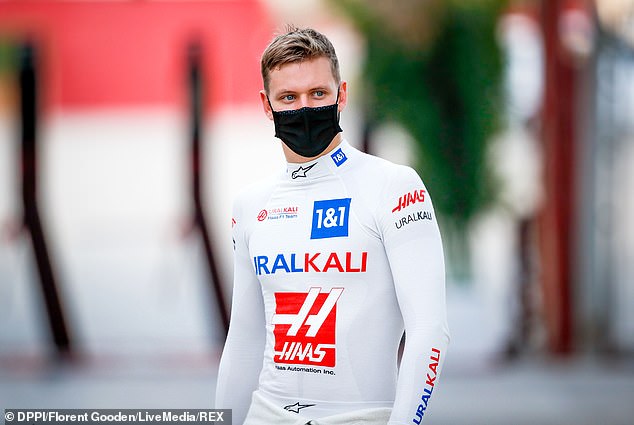 The son of Formula One legend Michael Schumacher is preparing for his race debut tomorrow as he carries on his father’s legacy. 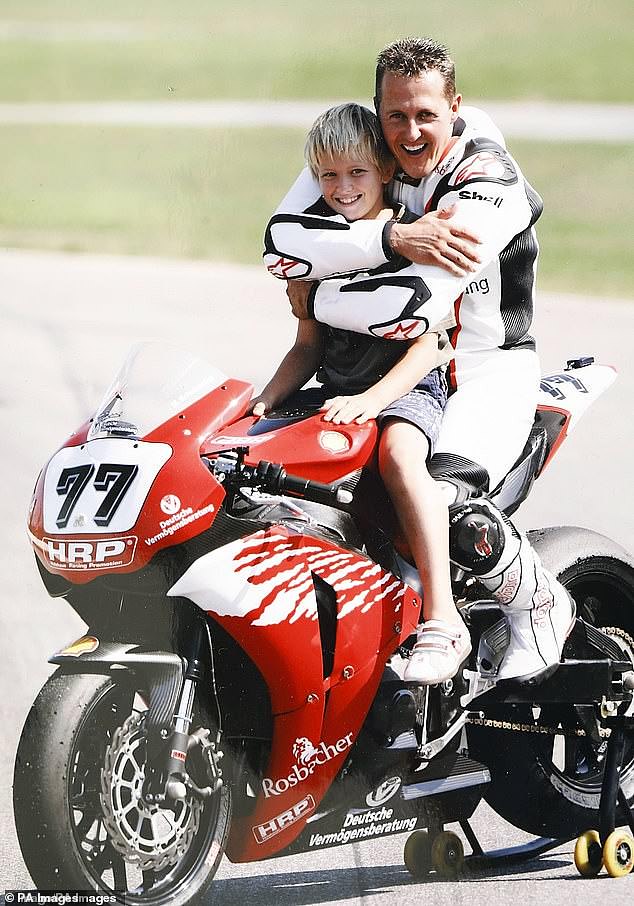 Mick, pictured with his seven time F1 champion father Michael, said it was a ‘private question’ on how his dad feels ahead of the race

The Ferrari great’s condition has remained a closely guarded secret ever since at the request of his wife, Corinna.

He is said to be given round-the-clock care at their family home in Switzerland.

Speaking before his first day in the Haas race seat about how his father feels about his upcoming bow, Mick remained guarded, answering: ‘Obviously, that is kind of a very private question and not a question for me to answer.

‘In terms of family, I am here alone. I have my group around me, and we will take on that task of going into my first Formula One race.

‘I stepped into a go-kart when I was two and a half. I tried different sports, football, ice hockey, but there was never anything that gave me the same feeling as racing and I never had the feeling that I wanted to do anything else.

‘So I pursued it and we took it to a more professional level when I was 12. That is when I started racing internationally and it was a decision I took with my dad. It has been a long time coming but I have always wanted this.’ 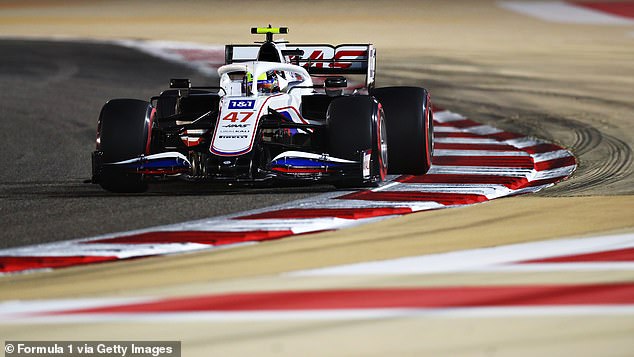 In qualifying on Saturday, Mick finished 19th and was more than seven tenths of a second faster than his fellow rookie teammate Nikita Mazepin 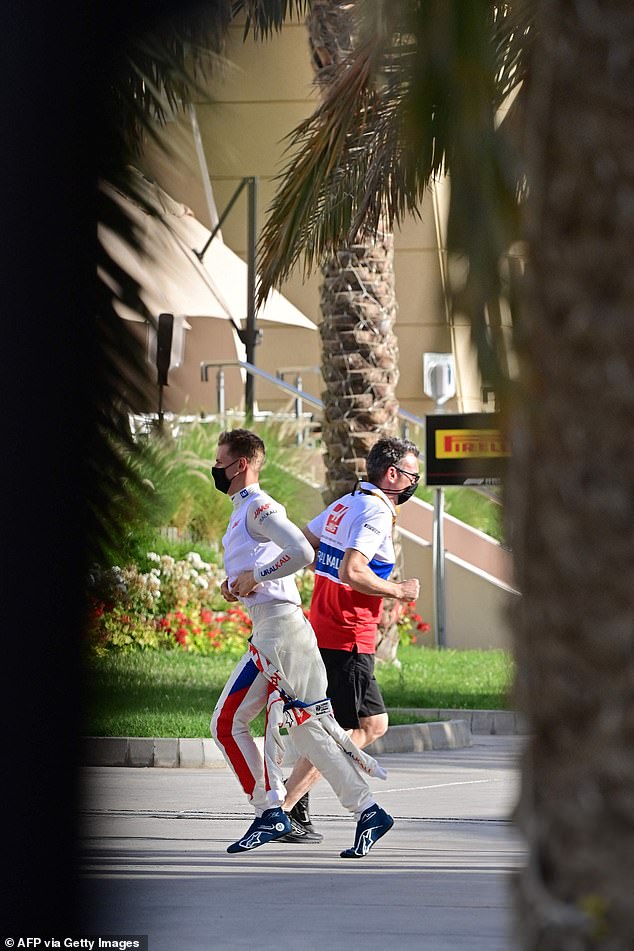 Mick eventually ended the second session in 18th for US-based Haas ahead of another practice session and qualifying later today.

Updates on Michael Schumacher, who won five world titles for Ferrari and his first two with Benetton, have been scarce since the accident in 2013.

In 2019 the family released an update on his 50th birthday assuring his millions of fans they are doing ‘everything humanly possible’ to help him recover.

Last year it was suggested he was set to undergo stem cell surgery which was cancelled because of the Covid 19 pandemic. 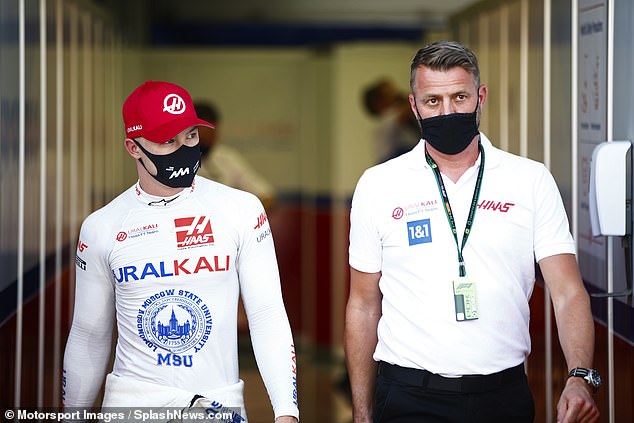 Mick is racing alongside Russian driver Nikita Mazepin, who was forced to apologise last year after posting a video on Instagram which showed him groping the breast of model Andrea D’Ival on Instagram

He said: ‘I think he’s in a vegetative state, which means he’s awake but not responding.

‘He is breathing, his heart is beating, he can probably sit up and take baby steps with help, but no more. 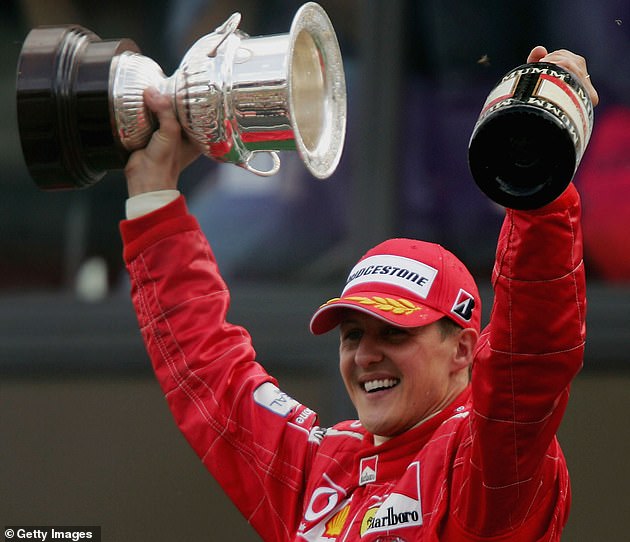 ‘I think that’s the maximum for him. Is there any chance of seeing him like he was before his accident? I really don’t think so.’

Former Ferrari teammate Felipe Massa admitted Schumacher was in a ‘difficult place’ adding: ‘I know how he is, I have information.

‘The main thing about all this is that we know his situation is not easy. He is in a difficult phase but we need to respect him and the family.’

Jean Todt, a close friend of the seven-time champion from their time at the Italian racers, gave a more positive update claiming they chatted and he was aware.

He added: ‘I saw Michael last week. He is fighting.

‘But he has an amazing wife next to him, he has his kids, his nurses, and we can only wish him the best and wish the family the best, too.’