The United States is grappling with a jaw-dropping surge in the number of novel coronavirus infections. More than 288,000 Americans have been killed by a virus that public health officials now say can be spread through airborne transmission.

The virus spreads most commonly through close contact, scientists say. But under certain conditions, people farther than two metres apart can become infected by exposure to tiny droplets and particles exhaled by an infected person, the US Centres for Disease Control and Prevention said in October. Those droplets and particles can linger in the air for minutes to hours.

"The images are very, very telling," said Rajat Mittal, a professor of mechanical engineering in Johns Hopkins University's medical and engineering schools and an expert on virus transmission. "Getting two people and actually visualising what's happening between them, that's very invaluable."

The highly sensitive camera system detects variations in infrared radiation that are not visible to the naked eye. The technology is more typically used in military and industrial settings, such as detecting methane gas leaks in pipelines. In 2013, it was deployed by law enforcement during the 20-hour manhunt for the Boston Marathon bombers. 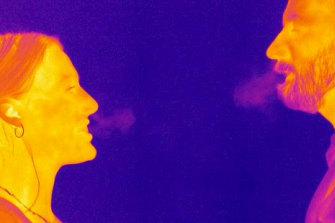 The camera mapped the partial path of the nearly invisible particles we exhaleCredit:The Washington Post

But fitted with a filter that specifically targets the infrared signature of carbon dioxide, the camera can be used to map in real time the partial path of the nearly invisible particles we exhale.

According to experts, the footage under-represents the potential risk of exposure from airborne particles.

Those particles may spread farther or linger longer than the visible exhalation plume, which dissipates quickly to a level of concentration the camera can no longer detect.

Environmental factors such as airflow in a space, wind and sunlight can reduce the chances of spread, as can such behavioural factors as mask-wearing and social distancing.

The risk of exposure increases when people are not wearing masks and are close together in an enclosed space or in an area with poor ventilation.

Get our Coronavirus Update newsletter

Stay across the news you need to know related to the pandemic. Sent Monday and Thursday. Sign up here.