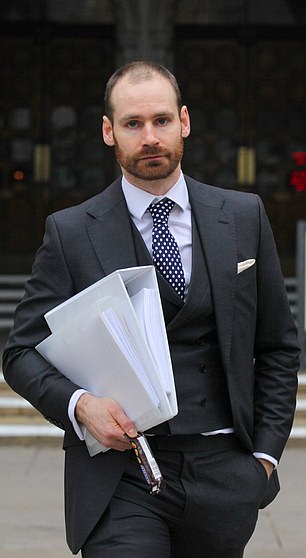 William Reeve outside Court of Appeal after hearing in dispute over Leadenham Estate. His appeal has been refused

A millionaire aristocrat who fears his inheritance has lost a court battle with his lay canon mum over the family’s 230-year-old estate.

Old Etonian, William Reeve, 38, says the future of the 3,000-acre Leadenham Estate, an 18th Century gem in Lincolnshire, is at risk due to his parents’ divorce.

The estate, with grade II*-listed Leadenham House at its heart, is due to be split between his parents, Peter and Henrietta, after their marriage collapsed.

But William, 38, says that means the estate he manages will inevitably have to be sold, ending centuries of Reeve family ownership.

He claimed the estate had been promised to him by his father and it was ‘unconscionable’ to split it up in the divorce.

His arguments were last year rejected by a judge, who said any assurances given to him by his father were ‘not sufficiently clear’ to be relied upon.

William challenged the ruling, but now the Court of Appeal has dashed his hopes and dismissed claims that the judge was ‘biased’ against him.

Before his parents’ divorce, the Leadenham Estate was owned entirely by Peter Reeve, aged 71, the court in London heard.

But, following the split in 2013, it was agreed to ‘partition’ the estate, with Henrietta, 62, a lay canon at Lincoln Cathedral, owning 40 per cent and Peter the rest.

Desperate to keep the estate intact, William claimed his father had assured him that all of it would one day be his.

‘The goal of my case is to keep the estate together…my primary aim is securing the future,’ he told the court.

He claimed that, by agreeing to settle their divorce by splitting the estate, his parents had acted in an ‘unconscionable manner’.

Judge Jane-Anne Evans-Gordon accepted last year that Peter had ‘made various representations to William about passing on control or ownership of the estate.’ 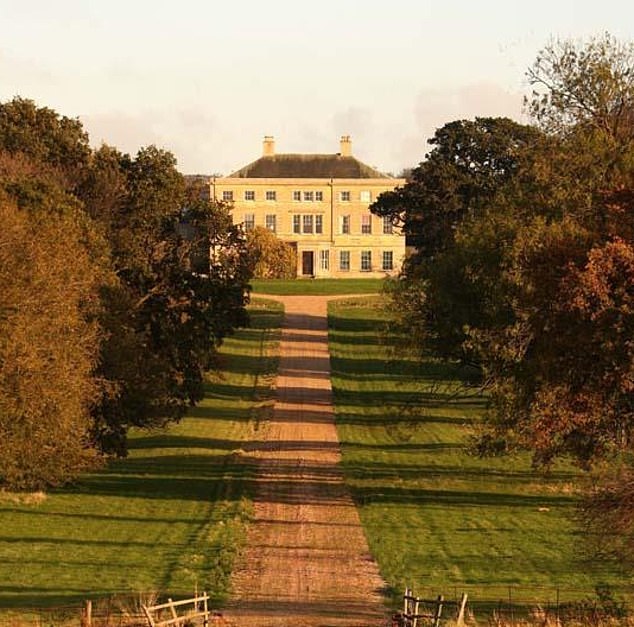 Leadenham House is at the centre of the row as William, one of the four Reeve children, claims it will have to be sold off

But she ruled that William had been given ‘no sufficiently clear assurance’ that the estate would be transferred to him during his father’s lifetime.

Dismissing William’s claim, she ruled he could have no legal complaint as he had not in fact ‘relied on anything said by Peter.’

Grade 2-listed Leadenham House has been in the Reeve family since it was built in the 1790s, and William argued that, with the estate divided between his parents, there simply wouldn’t be enough income to maintain and repair the historic pile.

He told the Appeal Court: ‘Even now, the threat on Leadenham House is still huge.’

Accusing Judge Evans-Gordon of bias, he pointed out that she had earlier presided over parts of his parents’ divorce case.

Those hearings had been behind closed doors and he had been kept in the dark about things that might have been said against him, he argued.

He said he had seen a document from the divorce which painted him in a ‘negative’ light, and questioned whether more had been said that he did not know about.

‘It is a pattern, I say, where I get referenced so frequently, and generally negatively, by my mother in the matrimonial proceedings,’ he told the court.

But, dismissing his appeal today, Lord Justice Baker said there were ‘no grounds whatsoever for thinking that Judge Evans-Gordon was biased.’

‘Far from supporting William’s assertion that the judge was concealing information from the matrimonial proceedings, the transcript demonstrates conclusively that she was doing her best to ensure that anything relevant to his claim was disclosed to him,’ he added.

‘No fair-minded and informed observer…would conclude that there was any real possibility that Judge Evans-Gordon was biased,’ concluded the judge, who was sitting with Lord Justice Floyd.

Lord Justice Baker earlier told William: ‘It is obviously a tragedy for your family what has happened. It is very sad indeed.’

The case comes as another of the Reeve children is battling a case.

James Reeve, is currently locked in a row with single mother Georgina David, who has accused him of letting them bring up their baby alone despite his family owning the 20-bedroom home.