‘You’ll have to drag us off the land’: Traveller families who have parked 25 caravans near millionaires’ village defiantly insist they are staying put (and have even laid 2,000 tons of hardcore)

It is the idyllic Home Counties village renowned for entertaining illustrious guests, including two of England’s most celebrated Monarchs.

Tucked away in the Hertfordshire countryside, Little Hadham hosted both Elizabeth I and William III, who stayed at nearby Hadham Hall, a magnificent manor house, during their travels around the country.

But for the past three weeks, the village – a collection of thatched cottages and multi-million-pound mansions on the banks of the River Ash – has hosted guests who have not exactly been welcomed with open arms. 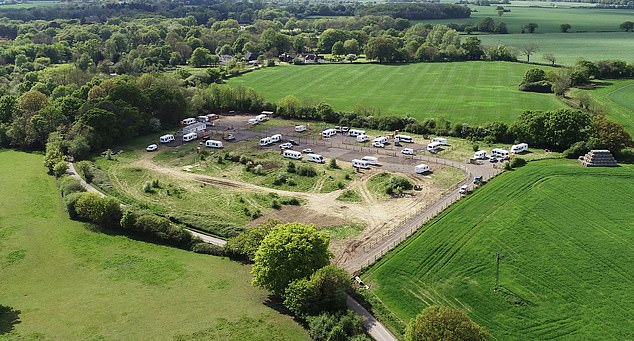 EYESORE: The caravan park on the edge of Little Hadham was built in just four days. Left: One of the static caravans being delivered and, right, the travellers start to put up fence posts

On Good Friday, a large group of travellers arrived at Little Hadham, shattering its tranquillity and causing anger among villagers who fear their peaceful rural haven is now threatened by a permanent caravan site.

In an astonishingly slick operation, contractors paid by the travellers poured 2,000 tons of hardcore on to a field on the edge of the village and, in just four days over Easter, transformed it into an ugly caravan park.

Caravans continued to arrive until last weekend. The site is now occupied by ten families who yesterday told The Mail on Sunday defiantly that they will have to be ‘dragged’ off the land.

The drama in Little Hadham, with a population of just over 1,000 people, is a vivid example of how the quiet serenity of a village, which has hardly changed for centuries, can be upturned in a matter of hours – and how residents are powerless to stop it. The travellers have bought the land but did not secure planning permission before they began building fences and laying the hardstanding on which they parked more than 20 caravans and mobile homes.

After their abrupt arrival, the council served an injunction banning any more building at the site but villagers complain that it has been flouted. 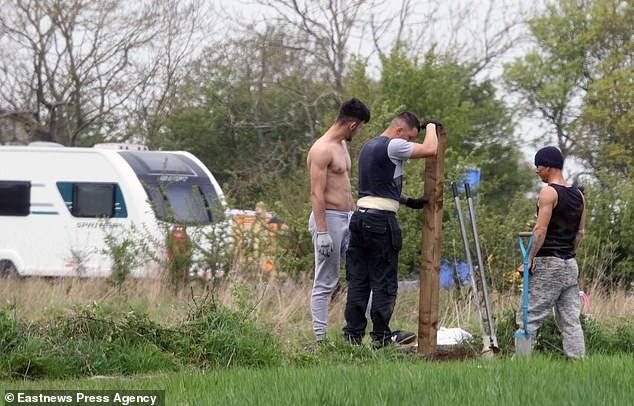 People were spotted on the site erecting fence posts. The council have imposed a ban on anymore construction work being done on the site, as the travellers are currently applying for retrospective planning permission

To their mounting frustration, police have not enforced the injunction because they say it is a civil, rather than a criminal, matter. Little Hadham was once the home of 1970s folk rock group Fairport Convention. It is now popular with wealthy professionals wanting a peaceful location within striking distance of the capital.

The village is a ten-minute drive from the M11 and three miles from Bishop’s Stortford, with its 40-minute rail connection to London.

On the edge of the village is Silver Leys Polo Club, believed to be England’s oldest, where teams from across the country will next weekend gather to compete in the Blue Ribbon Cup.

Porsches, Range Rovers and Bentleys are parked outside the 50 or so homes in the village, which are each worth more than £1 million.

One area of the village, called Westland Green, is known locally as ‘Millionaires Row’ and residents include judges, bankers, company bosses and former West Ham and England defender Matthew Upson. 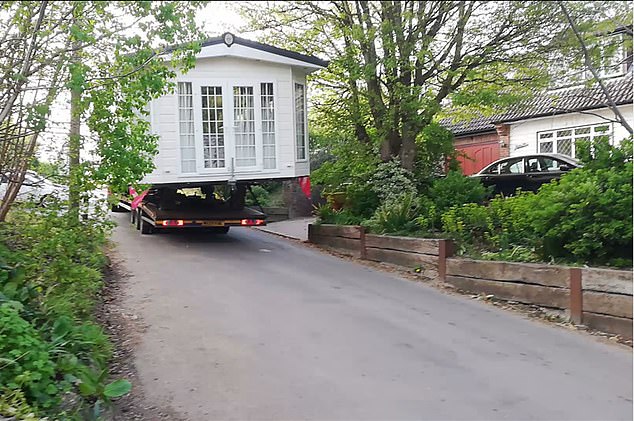 Two travellers knocked on the door of one resident, claiming they were about to bring through a heavy piece of plant machinery. They asked the resident to move a car to make space in the road. The resident agreed, only to find that the heavy plant machinery was actually a static caravan on the back of a lorry

It was near this exclusive enclave that the calm of what should have been a relaxing start to the Easter weekend was shattered by the noise of belching diesel engines.

At 8.30am on Good Friday, three 20-ton lorries rumbled on to a nearby field next to Chapel Lane. It was the first that many in the village knew about the site being sold – quite legitimately – to travellers.

Land Registry records show that the land was purchased in November for £95,000 by Donna Bull, of Plaistow, East London. She could not be contacted for comment.

A contractor for the lorry company told one astonished resident they were planning to make 30 deliveries of hardcore to the field that day.

Locals stood in the lane and watched gobsmacked as the trucks delivered around 2,000 tons of the building material, turning the field into ‘something resembling a car park’.

Although initially blindsided by the travellers’ sudden arrival, East Hertfordshire District Council had by Saturday obtained an injunction banning any more building at the site. The council, however, says the travellers have ‘not complied with the terms of the injunction’ and the work is believed to have continued until Easter Monday. 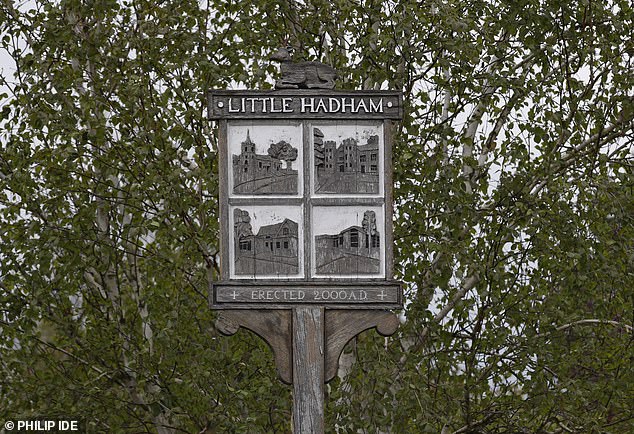 Tucked away in the Hertfordshire countryside, Little Hadham hosted both Elizabeth I and William III, who stayed at nearby Hadham Hall, a magnificent manor house, during their travels around the country

As the drama unfolded, two travellers knocked on the door of one resident, claiming they were about to bring through a heavy piece of plant machinery. They asked the resident to move a car to make space in the road. The resident agreed, only to find that the heavy plant machinery was actually a static caravan on the back of a lorry.

The travellers have now lodged a planning application with the council for permission to build the caravan park, which would allow ten mobile homes and ten touring caravans.

But residents have lodged passionate objections to the scheme, which have been published on the council’s website. ‘The use of this land is agricultural and should remain as such,’ said Carol Riley, who lives in Chapel Lane. ‘The travellers’ site will have a massive impact on house prices.’

Jenni Curtis, who grew up in Little Hadham but was forced to move to Suffolk because it was too expensive, said: ‘I had to leave my whole family behind and all my friends who I have grown up with, as I couldn’t afford to live in Hertfordshire.

‘So it infuriates me that a group of people can buy the land from someone and then submit an application, and find a way around all the legalities and planning processes to make fools of everyone.’

For some families, the episode shows how travellers are apparently able to flout rules that others follow faithfully.

‘The rest of us law-abiding citizens have to go through due process and abide by decisions,’ said Rachel Law, from the nearby village of Puckeridge. ‘Seeking retrospective planning permission is a joke.’

Meanwhile, Tony Pressland, 59, who has lived in the village for 16 years, told The Mail on Sunday: ‘I applied to the council to have a mobile home on my land so I could move in my elderly mother to look after her, but they wouldn’t allow it. But these travellers can ride roughshod and break all sorts of regulations without anything happening.’

Hertfordshire Constabulary has told planners that it is neither opposing nor supporting the planning application.

‘I can find no trace of any incidents of crime that can be attributed to this proposed development,’ said Mark Montgomery, the force’s so-called crime prevention design adviser. ‘However, there has been a marked rise in the fear of crime within the locality since the applicants moved into the area.’

At the 16th Century Nags Head pub in Little Hadham on Friday night, there was only one topic of conversation among the regulars at the bar. ‘For the moment we’re all holding our breath, waiting to see what happens,’ said one person who asked not to be named. ‘We’re a normal village and don’t expect things like this to happen.’

In contrast, his companion praised the travellers for their audacity. ‘I think fair play to them.

‘If I suddenly built something in a field the council would be there straight away. However, because they stick together they know they can’t be touched.’

This week, eight children from the encampment will join Little Hadham Primary School. One parent of a child at the school, which has 140 pupils, voiced fears that the additional intake will have an impact on teaching.

On its website, the school states that it is committed to ‘developing the values of respect, honesty and equality’ and teachers are determined to make the new children feel welcome.

Keith Hutt, the chairman of the governors, said more teaching staff had been recruited and that the school would benefit from the new pupils. ‘There will be challenges but we will temporarily take on more classroom assistants to help out,’ he said.

‘We are very pleased to welcome these children. This is not a very diverse community and I think these children will bring a refreshing change to the school.

‘They will not be turning up en masse on Monday – we will stagger their arrival over three days.’

Last week, The Mail on Sunday was given the first tour of the encampment, which is home to about 50 travellers. As well as about 25 caravans, many of them brand new, the site is home to new cars and a trampoline. The travellers are renting portable lavatories which are serviced regularly, and have hired a skip. Some rubbish has been burned at the site.

Father-of-five Tommy was defiant and made clear that the travellers were determined to make the site their home. ‘When we get planning permission, we are going to tarmac the whole field,’ he said.

‘We want to get water and electricity – we want to put up lights and gates. This place will look better than the millionaires’ homes up the road. We don’t want to raise our children at the side of a road. Wherever we go, we get moved on.

‘We want our children to be registered with GPs and learn how to read and write in schools. We have pregnant women who will need to give birth soon in hospital.

‘It is better that we are here than in a school field or park.’

His comments will raise fears that the people of Little Hadham could face years of legal battles.

‘We spent our last pounds to raise the money to buy this land and we are not going to leave – we will need to be dragged off,’ Tommy added.

East Hertfordshire District Council said: ‘The council is doing everything it can, through legal procedures, to stop unauthorised works taking place. We will continue work to get the situation resolved.’