Fast food takeaway shops like McDonald’s and KFC were never told to shut during the coronavirus crisis but did so because they felt it was not ‘socially acceptable’ to stay open, a Cabinet minister claimed today.

Food Secretary George Eustice said the government had never ‘explicitly mandated’ that takeaways had to close.

But he said a combination of reduced footfall, staff anxiety and apparent social pressure had prompted many of the big players in the industry to do so.

Mr Eustice said he believed it is ‘quite possible for these venues to reopen and reopen safely’ as he insisted drive-through restaurants were ‘made for the social distancing situation’.

A number of companies have now started to reopen their restaurants with pilots in place for some drive-throughs across the country.

Mr Eustice’s comments are likely to now speed up the reopening process. 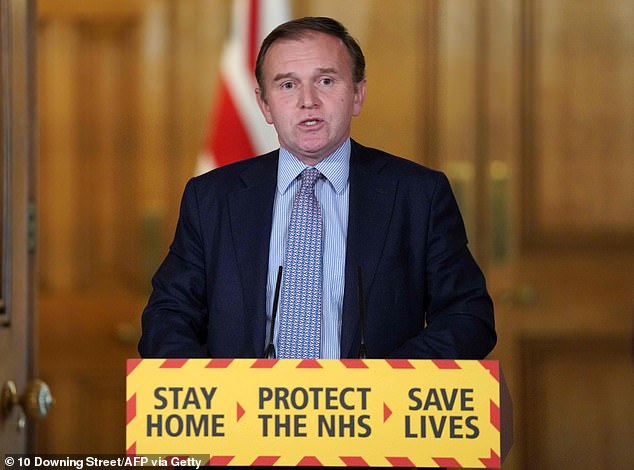 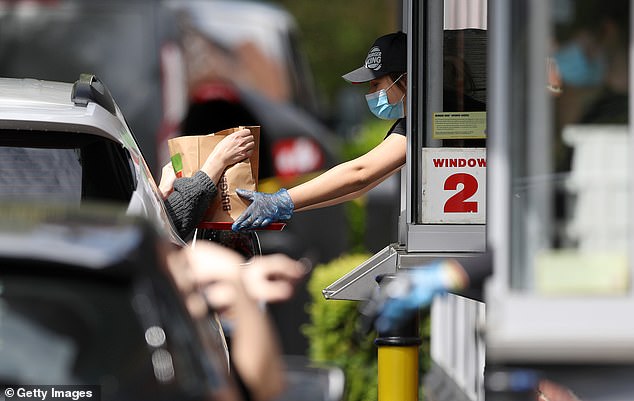 Mr Eustice said he believed driev-through restaurants could be reopened safely. Pictured is a reopened Burger King drive-through in Havant on May 1

Speaking at the daily Downing Street coronavirus press conference, Mr Eustice was asked if takeaways needed to have shut during lockdown and whether he was now encouraging them to reopen.

He said: ‘I have had a number of discussions with some of the food to go outlets, companies such as McDonald’s and KFC and Costa Coffee and so on.

‘It is the case that when we originally did the lockdown we were quite explicit that it didn’t cover takeaway food.

‘While clearly restaurants and pubs had to close we were quite keen to keep that capacity to be able to do takeaway food for people and that was clear in the guidance.

‘I think there are a number of reasons why these companies took a decision themselves of their own volition to close.

‘They had issues with anxiety among some of their staff and I think also a sense that given the strength of the overarching message of people should stay at home they felt there was maybe a sense that it wasn’t socially acceptable to stay open even though the government hadn’t explicitly mandated their closure.’

Pret A Manger is planning to reopen some of its stores for takeaway while McDonald’s is planning to open a small number of drive-through sites to test the water with KFC and Burger King doing something similar.

Mr Eustice said he believed fast food shops will be able to learn lessons from supermarkets on social distancing as they now look to get back up and running.

‘Our view is probably a McDonald’s drive through is made for the social distancing situation that we are in in that people do not leave their car, they place their order and somebody passes a bag of food to them at the end through a kiosk,’ he said.

‘So I think it is quite possible for these venues to reopen and reopen safely.

‘We never mandated that they should close.

‘We learnt a lot from supermarkets and other food outlets about how you can do social distancing and do it well and I think some of those food to go businesses will probably be seeking to learn lessons from what supermarkets have done as they consider tentatively reopen.’