A missing 3-year-old boy was found alive in the rugged Australian woods three days after being reported missing, police said.

Anthony “AJ” Elfalak, who has autism and is non-verbal, was taken to a hospital for observation after he was found Monday on his family’s remote rural property near the village of Putty, north of Sydney.

Officers from the Hunter Valley Police District responded to reports Friday afternoon that a child at the property had gone missing, New South Wales police said.

AJ’s family suspected that he had been abducted after hours of searching failed to find any trace of him and reported seeing a pickup truck nearby. But police do not believe anything suspicious was behind the disappearance.

Rescue footage shared by NSW police shows the boy sitting in a shallow creek and drinking water with cupped hands while a helicopter circles overhead. It was about 1,540 feet from the family’s home.

Ambulance officers said AJ was found to be in good condition but he was taken to a hospital for observation.

His father, Anthony Elfalak, said AJ had been bitten by ants, had a diaper rash and suffered abrasions.

“It’s a miracle,” the father told reporters after he and his wife, Kelly Elfalak, were reunited with their son.

Kelly brought AJ home on Monday night to sleep in his own bed. She thanked the hundreds of emergency services officers and volunteers who had scoured the steep terrain surrounding the house to look for her son. 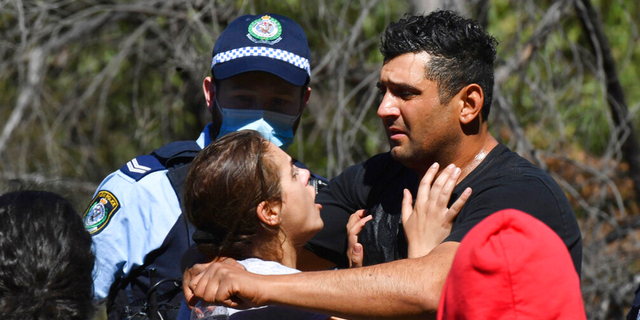 Anthony Elfalak, right, and his wife, Kelly, embrace after hearing their son AJ is found alive on the family property near Putty, north west of Sydney, Australia, Monday, Sept. 6, 2021.
(AP)

“I can’t explain it, I’m so blessed,” the mother told reporters while holding AJ. “I’m so happy that he is here. He’s with us, he’s safe and well and healthy, that’s all that matters.”

“We were all emotional and I said to the boys … ‘If that doesn’t make you happy, nothing will,'” Smith said. “We’ve been involved in many jobs that don’t turn out like this and it’s been the other end of the spectrum and it’s just really nice to have a positive outcome like this for once.”