Kevin Hynes believes he is the only living person to have seen a pilot crash a wartime-era plane into Victoria’s biggest inland lake decades ago.

Now, he might also be among the last to see the rusting wreck where it’s lain for 70 years, lodged in Lake Corangamite, before a salvage mission starts to extract and restore it.

At four years of age he saw the airman, Vance Drummond, a trainee with the Royal Australian Air Force, survive the crash and warm up by a stove at the Hynes’ farm after he was rescued.

“My dad and my uncles went over to help,” he said. “You could see the plane go in and hit the water; it didn’t break up.” 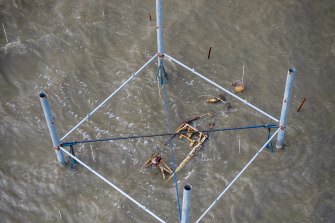 Wreckage of the CAC Wirraway A20 WWII plane that was forced to ditch in Lake Corangamite.

In the next decades few people spared a thought for the abandoned CAC Wirraway aircraft – one of 755 built at Fishermans Bend for air force training – which became submerged until drought exposed it in 2005.

But Rodney Knights, a salvage diver and aviation enthusiast, says he is now weeks away from pulling the wreck from the lake after a 12-year quest to retrieve it.

“I have really enjoyed the journey, although it has been frustrating at times,” he said. 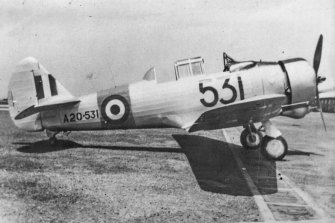 The eight-metre-long craft is nearly a kilometre offshore and its extraction is a unique challenge for heritage and aviation buffs.

There are more than 20 submerged aircraft wrecks in Victoria, but according to Heritage Victoria none has ever been salvaged.

It has required about 30 volunteers, an archaeologist and more than a dozen permits, with the coronavirus lockdowns adding further delays and bird breeding seasons allowing works to occur only in cooler months.

“Nobody has really done this before. Most wartime aeroplanes that have crashed into lakes are smashed; this one is intact,” Mr Knights said.

His team has constructed a platform around the aircraft and will use a gantry system to carefully extract it before placing the fuselage and wings into a preserving pool.

Air and salt water have heavily eroded parts of the plane, but Mr Knights said the oxygen-free mud has preserved much of the base.

The RAAF gifted him the wreck and he hopes to use parts from another Wirraway to rebuild the lost aircraft for display in a museum.

“It would be great to see it fly. At this stage, nothing is impossible,” he said.

“I feel I am saving some sort of history.” 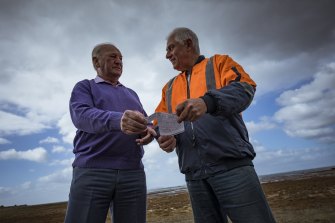 “The Wirraway was the first mass-produced modern aeroplane in this country,” Mr Briggs said.

Mr Knights said extracting the Wirraway – named after an Aboriginal word meaning challenge – was a salvager’s equivalent to a marathon or mountain climb, after usually recovering cars or boats caught in waterways.

“The fact it was hard and difficult and nobody could do it; I thought I’d have a go,” he said. “If no one else with my skill set came along after me I believed it would never be able to get out.” 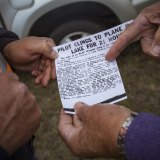 An old newspaper clipping on the Wirraway crash.Credit:Chris Hopkins

Mr Hynes, now a Hoppers Crossing resident, visited the lake to see the wreck on Sunday.

After the crash he and his uncles had watched the pilot’s career unfold as he served in the Korean and Vietnam wars and crashed and died on another training flight in 1967.

“When he disappeared near Williamstown, NSW, it touched a nerve for a while. Unfortunately they never found him or the plane,” Mr Hynes said.

“If there’s anything there that belongs to him [in this plane] I’d like to see it get back to his family.”