Missouri mother, 48, is left with a broken nose and two black eyes after protecting her 16-year-old daughter when gang of teenage girls turned up at their home to attack her

A mother has been left with a broken nose, two black eyes and a concussion after she stepped in when a gang of teen girls turned up at her home looking to fight her daughter.

Michelle Audo, 48, confronted the group of 14-year-olds when they arrived at her house at night in Blue Springs, Missouri, on May 14.

They had allegedly been there to attack her 16-year-old girl but she stepped in before they got the chance.

Audo revealed how she was repeatedly punched during the assault, suffering a broken nose, two black eyes and a concussion.

The brutal onslaught only came to an end when her oldest daughter, 18, and husband stepped in. 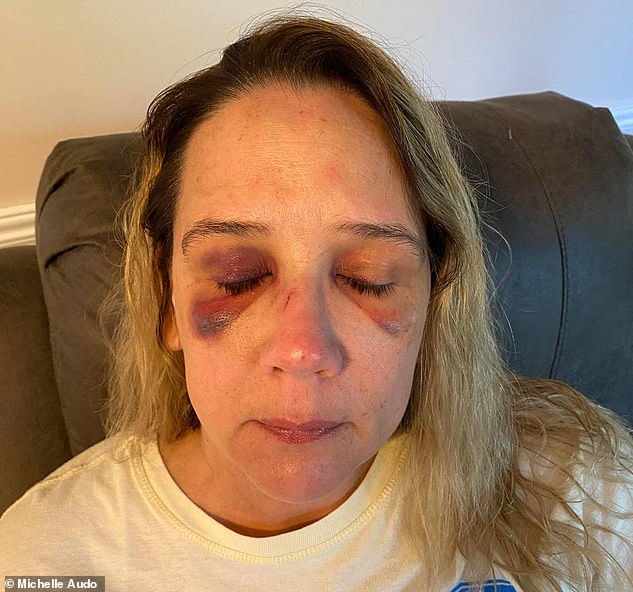 Michelle Audo, 48, suffered a broken nose, two black eyes, and a concussion when two 14-years-old showed up at her home looking to fight her 16-year-old daughter and was attacked

By the time police arrived the teen assailants and their driver had already fled in a white four-door sedan.

A third person was behind the wheel of the getaway car. According to Missouri law, 16-years-old is the legal driving age.

Later, one of the 14-year-old’s took to Snapchat to boast about the disturbing incident. 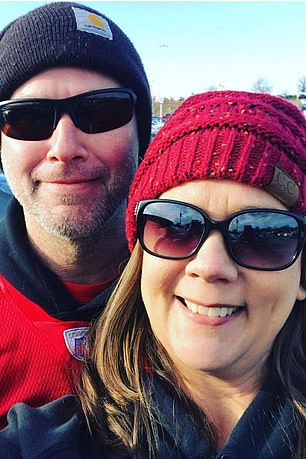 A photo of Audo with her husband, who used a cane to thwart off one of the assailants during the unprovoked attack

She allegedly wrote: ‘Imagine letting ur mom get her ass beat’ and ‘Tell yo mom to come clean her blood off my window.’

The two teenage suspects names were not released because they are juveniles confirmed to be 14-years-old.

‘We are waiting for the investigation to be completed before the charges are filed,’ Brady said.

‘The girls have not been arrested. One is looking at assault charges so far. It is not determined if the other teen will face charges.’

It was unclear the relationship of the girls and whether the attended the same school.

Brady told DailyMail.com that the girl listed as the offender is from the suburb of Greenvale located on the border of Blue Springs.

And the other teen is from Blue Springs and is in two different school districts. ‘We take everything serious with every case we do,’ she said.

Audo said her daughters, ages 16 and 18, woke she and her husband up when a ‘carload of girls,’ drove up to their home, Kansas City Star reported. 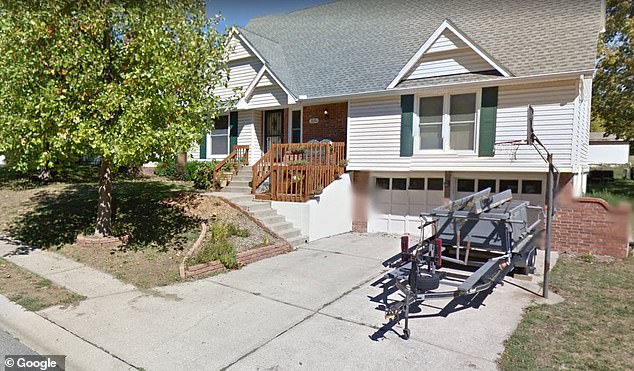 A photo of the Blue Springs, Missouri home where the three alleged assailants drove to in search of Michelle Audo’s 16-year-old daughter they claimed they wanted to fight

Audo said the girls demanded to see her 16-year-old daughter, the Star reported.

The protective mother told the bullies that there was no way her daughter was going to come outside.

When they threatened that they would then come inside her home to get her daughter. The mother said, ‘No, you’re not.’

Seconds later, two of the teens jumped out of the car and started beating on the mother.

As one of the girls allegedly punched Audo in the face, as the second girl joined in.

The fight escalated where all three landed on the ground with the two teens on top of Audo, the Star said.

As this disturbing attack was taking place, Audo’s 18-year-old daughter jumped in pulling on each of the teen thugs, as Audo’s husband using a cane fought off one of teens who was about to punch his wife again, the news outlet reported.

After the harrowing ordeal, the 14-year-olds ran off and into a four-door white sedan  before driving off.

Shortly after, one of the female attackers reportedly went on Snapchat to boast about the attack writing: ‘Imagine letting ur mom get her ass beat’ and ‘Tell yo mom to come clean her blood off my window.’

When police caught up with the teen assailants, they claimed that they hit Audo after she ‘came to the side of the car and swung’ at them, according to the police report The New York Post reported.