Britain is bracing for yet another day of strike chaos tomorrow as National Highway workers become the latest to down tools, following a week of disruption which has seen paramedics and nurses walk out in their thousands.

Britons getting home for Christmas will struggle to travel by road and rail amid strikes by the train and National Highway unions, while border force staff will also walk out from Friday.

Christmas Eve will see the start of yet another national rail strike from 6pm that evening until 6am on the 27th of December.

The industrial action will cause carnage for those travelling across the UK to make it home for the holidays to see family and friends. 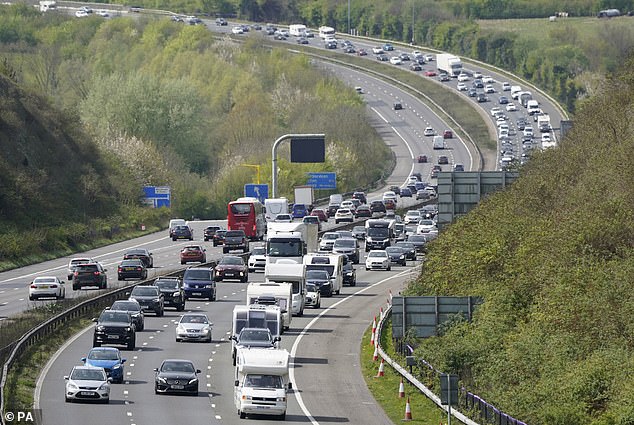 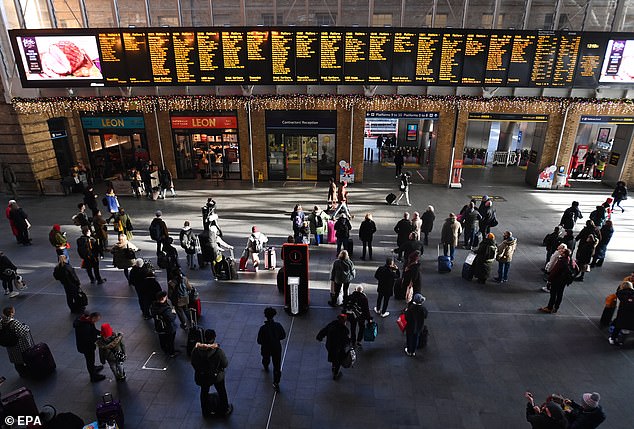 Train passengers are set to be hit by yet more travel chaos as a national rail strike begins from Friday evening. Pictured: King’s Cross Station during an RMT strike on December 17

It follows a week which has seen nurses and paramedics walk out in a dispute over pay, putting increased pressure on an already-strained NHS.

Do YOU think ambulance workers are right to strike? Vote here and tell us why…

A patient is brought to the Royal Sussex County Hospital in Brighton in a 4×4. NHS leaders have said driving to hospital is a ‘sensible’ approach for non life threatening cases

Critics have argued the action will endanger lives, but Unison, representing the ambulance workers, said the NHS had long-running issues not related to the strike and said it was up to the government to open negotiations.

NHS chiefs and unions have also assured the public that life-saving services will not be impacted by the strikes.

However, people have been asked to only call 999 for an ambulance if the situation is life-threatening during the paramedics’ strike, as some families are forced to drive their loved ones to A&E.

National Highways workers will strike from tomorrow until Christmas Day in the latest phase of industrial action by the UK’s biggest civil service union.

The four-day walkout by workers who plan, design, build, operate and maintain the roads follows action by colleagues in Yorkshire & Humber, north-west and north-east England.

PCS general secretary Mark Serwotka said: ‘We’re aware our action is likely to inconvenience travellers but, even as we escalate it ahead of Christmas, we remind people this dispute could be resolved today if the Government puts more money on the table.

‘Our members are telling us they have to cut back their spending at Christmas time because they are running out of money. They have been offered a below-inflation pay award, at a time when inflation is higher than 10 per cent.’ 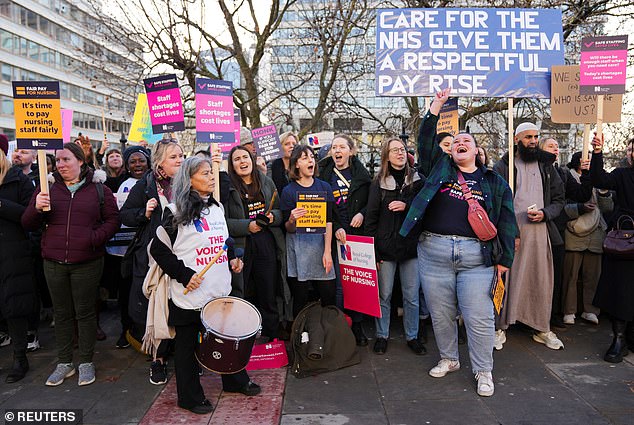 Nurses have gone on strike this week in a long-running dispute over pay. Pictured: A picket line outside St Thomas’ Hospital in London 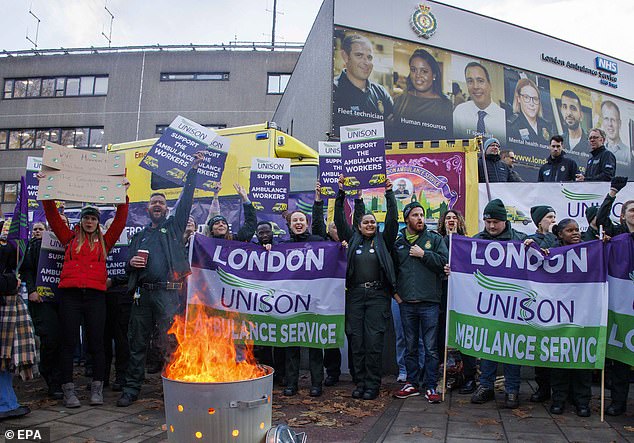 Ambulance staff are also on strike this week, including paramedics, technicians and call handlers from NHS hospital trusts

The National Highways strikes will escalate further on December 30 when PCS members across the traffic officer service in the West Midlands and south-west England begin action and on January 6 when it reaches the East Midlands and eastern England.

In addition, all PCS members in National Highways, working for the traffic officer service, will take action on January 3 and 4.

Meanwhile, around 1,000 Border Force staff will walk out from Friday until the end of the year, apart from December 27.

A border force boss has insisted that security at Britain’s borders will be ‘non-negotiable’ during the strike.

Border Force staff who are members of the Public and Commercial Services Union will strike every day from Friday to the end of the year, except December 27.

Action is being taken in a dispute over pay, pensions and jobs by workers at Heathrow, Birmingham, Cardiff, Gatwick, Glasgow and Manchester airports, and the port of Newhaven in East Sussex.

Chief operating officer Steve Dann said there were ‘robust plans in place’ to limit the impact but warned ‘people should be prepared for disruption’.

Mr Dann said: ‘Border Force’s number one priority is to keep our borders safe and secure, that’s something that we will not compromise on. It’s non-negotiable.

‘In anticipation of the strike action, Border Force has for a number of months undertaken extensive planning, and we’ve been working with the travel industry and continue to work closely with all UK ports to assess the impacts of the announcement on the travelling public. 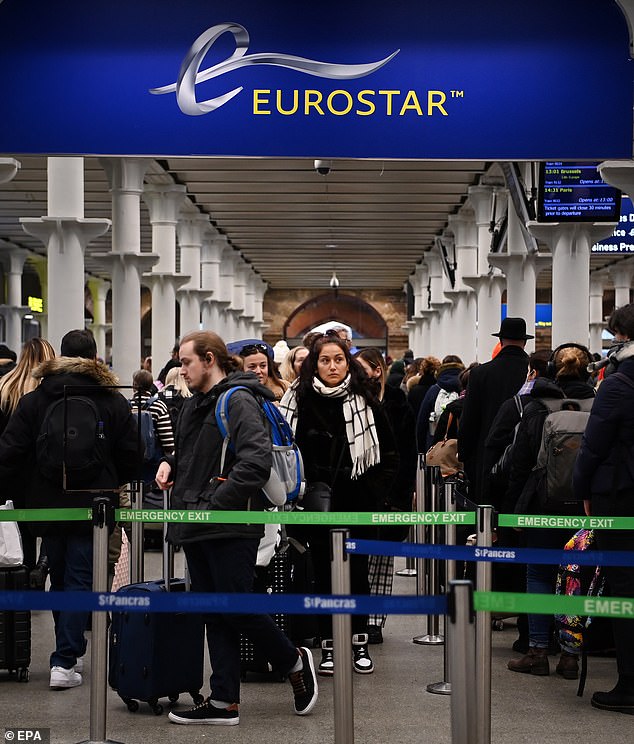 Elsewhere, a strike by Eurostar security guards, employed by Mitie, has been called off after their union reached an agreement over pay 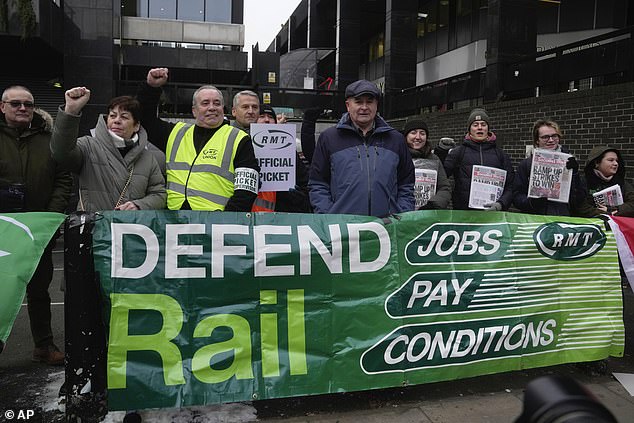 RMT general secretary Mick Lynch (centre) said of the Eurostar security guards resolution: ‘These workers have fought hard for an improvement in the offer and succeeded’

‘We do have robust plans in place to minimise delays to passengers, but we’ve been very clear from the start that people should be prepared for disruption and take action to plan ahead.’

There are fears that delays in checking the passports of arriving passengers could lead to long queues and even people being held on planes, disrupting subsequent departures.

Military personnel and volunteers from the Civil Service have been trained to step in.

Mr Dann said: ‘Military personnel and volunteers from across the Civil Service have been trained to support Border Force at airports and ports through the strike period.

‘We have a reasonable expectation that by using this contingency workforce, we will be able to deliver a service that keeps most if not all ports open.’ 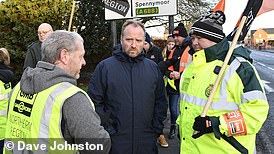 He went on: ‘Our contingency workforce will not be able to operate with the same efficiency as our permanent workforce.

‘As in the case with any industrial action, we simply will not know the levels of Border Force permanent officers who will report for duty each day and what the operational impacts might be.’

Mr Dann said Border Force has been ‘working extensively’ with the travel industry to ‘minimise the circumstances which can see travellers waiting excessive amounts of time or where operators and carriers might have to take short notice changes to schedules’.

He explained that Border Force will ‘expect operators to make any adaptions’ to ensure a ‘smooth flow of passengers’.

Travellers are being urged to use e-gates if they can, check with operators that there has been no change to their service, and to be ‘kind and patient’ with staff at Border Force.

Elsewhere, a planned strike by Eurostar security guards employed by a contractor has been called off following a new pay offer.

Members of the Rail, Maritime and Transport union (RMT) working for Mitie were due to walk out on Thursday.

The union said the company had made an improved pay offer of over 10 per cent and an uplift of nearly 30 per cent for the lowest paid.

The union said it had also secured guaranteed hours on permanent shift patterns and employees who worked flexibly would be offered choices which suited their individual requirements.

RMT general secretary Mick Lynch said: ‘These workers have fought hard for an improvement in the offer and succeeded.’

Planned strikes by railway cleaners in a dispute over pay have been called off.

Members of the Rail, Maritime and Transport union employed by a number of private contractors were due to walk out on Thursday and Friday.

More than 1,000 cleaners would have been involved, making it the biggest strike of its kind.

The cleaners have been demanding £15 an hour, company sick pay, decent holidays and good pensions.

Planned strikes by railway cleaners in a dispute over pay have also been called off.

RMT union members employed by a number of private contractors were due to walk out on Thursday and Friday.

More than 1,000 cleaners would have been involved, making it the biggest strike of its kind.

The cleaners have been demanding £15 an hour, company sick pay, decent holidays and good pensions.