Washington: Prime Minister Scott Morrison will go on a bipartisan charm offensive with the most senior members of the US Congress in a bid to turn his plan to develop a fleet of nuclear-powered submarines into reality.

He will also meet members of the powerful Senate Select Committee on Intelligence.

Congress, which is famously prone to gridlock, will need to provide export control exemptions and sign off on the sharing of highly sensitive intellectual property for the submarine plan to take effect.

Republicans are expected to win back control of the House of Representatives at the midterm elections next year, highlighting the importance of ensuring both major American parties regard Australia as a sufficiently trustworthy strategic ally.

As well as the prized submarine technology, the AUKUS partnership will involve the sharing of other sensitive intelligence on missile technology, satellites and artificial intelligence between the US, Australia and the UK.

Speaking after his meeting with Biden in New York, Morrison said he was aware of the complexities of advancing the submarines plan.

“We have entered this arrangement with our eyes wide open,” he said.

At their first bilateral meeting, Biden declared that Australia was America’s closest and most reliable ally before adding that the two nations were in “lockstep”.

“The United States has no closer or more reliable ally than Australia – our nations have been together for a long time,” Biden said. 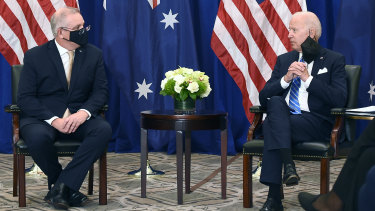 Alluding to the challenges posed by climate change, pandemic, cyber warfare and a rising China, Biden said he believed the world was at an “inflection point”.

“Things are changing,” he said. “We can grasp the change and deal with it or be left behind, all of us.”

Majorities in the House and Senate are expected to come on board given the longstanding goodwill for Australia and a bipartisan determination to push back on China’s expansionism in the Indo-Pacific.

In a statement issued during a visit to London last week, Pelosi said she “commended the Prime Minister on his leadership in working with President Biden and Australian Prime Minister Morrison on the recently announced trilateral AUKUS security partnership”. 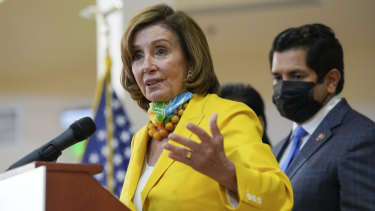 In a briefing earlier this week, a senior Biden administration official described Australia as a “unique actor” with “incredibly high standards” for nuclear non-proliferation.

“We don’t have the intention of extending this to other countries,” the official said of the submarine technology.

“This is for Australia. And it is based on a unique set of circumstances involving the Australian case.”

Morrison will also meet with representatives from the bipartisan Friends of Australia caucus to gin up enthusiasm for the plan.

“This is a great move by President Biden towards meeting the challenge in this critical region and recognising the hard-won and rock-solid relationship between the United States, Australia and the United Kingdom,” he said.