A mother has blasted a ‘moron’ Mercedes driver who dumped their car over the pavement which forced her to push her brain-damaged son into the road to get past.

Michelle Williams, 59, from Bedworth, Warwickshire, was pushing her son Ashley Williams, 25, on his wheelchair when they encountered a Mercedes parked on the pavement along Furnace Road.

The mother did not have enough room to push Ashley’s wheelchair past the car on the pavement and was forced to push his chair out into the road to get past.

Ashley is permanently restricted to a wheelchair after a violent attack last year. He suffered two strokes, a bleed on the brain and was in a coma for six weeks afterwards.

Liam McMahon, a 21-year-old who was only released from prison hours before attacking Ashley with a glass bottle of vodka on 1 April 2021, was handed a seven-year sentence at Warwick Crown Court.

Judge Andrew Lockhart QC said the force used was ‘that to make a decent dent in a tree with an axe’.

The 25-year-old has been left with a life-changing brain injury which requires round-the-clock care, as well as needing a hoist to get him out of bed each morning.

Michelle aired her frustrations in a Facebook post, labelling the driver ‘inconsiderate’ for parking on the pavement. 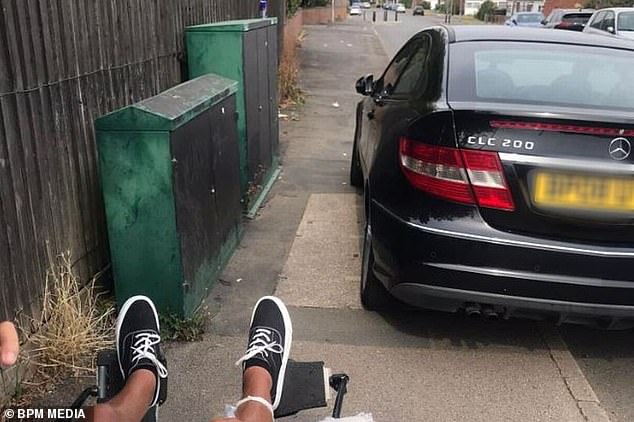 Mother Michelle Williams, 59, has blasted a ‘moron’ Mercedes driver who dumped their car over the pavement which forced her to push her brain-damaged son into the road to get past

She wrote: ‘Makes me so angry, inconsiderate morons parking like this I couldn’t even get by. I had to go on the road with Ash it’s totally unacceptable people who do this should be fined.’

Pavement parking is outlawed in London and the government is considering extending this across England. However, the laws around pavement parking elsewhere in the UK are not clear cut.

The Highway Code rule 244 states that drivers outside London ‘should not’ park on the pavement, rather than ‘must not’, which means it is only advice that is not backed up by any legislation. It is however illegal to drier on the pavement.

This law is difficult to enforce, because police officers need to see someone driving on the pavement.

The mum received many supportive messages on Facebook after sharing the image, as many lashed out at the driver for parking on the footpath.

One user wrote: ‘They don’t think about anyone else mate bloody awful.’

Another user added: ‘They should be find they don’t think they care about people in wheelchairs or pushchairs.’ Meanwhile, one added: ‘Omg how awful is this!! Totally unacceptable & unfair! Hope u and Ash r okay.’ 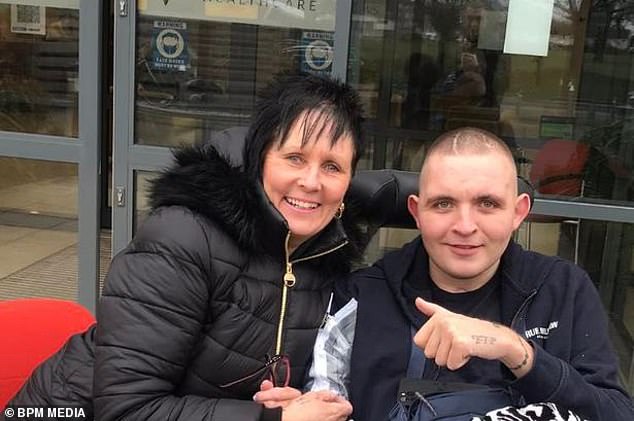 Michelle (pictured with son Ashley) did not have enough room to push Ashley’s wheelchair past the car on the pavement and was forced to push his chair out into the road to get past. Ashley is permanently restricted to a wheelchair after a violent attack last year. He suffered two strokes, a bleed on the brain and was in a coma for six weeks afterwards

Ms Williams told CoventryLive: ‘I’m my son’s main carer and he has a brain injury. He got hit over the head with a bottle April 1 last year which left him with a bleed on the brain causing him to have two strokes.

‘He’s only 25 and permanently in a wheelchair and I took a picture of the car along Furnace Road in Bedworth.

‘It’s a problem all over Bedworth where I live and it does make me feel really angry when a car is parked more on the path than the road.’

If not, there is no direct proof the car was driven on a footpath and theoretically could have been lifted into place.

It is the council’s responsibility to clamp down on pavement parkers. Drivers can get fined if their parked car causes an obstruction to wheelchair users or pushchairs.

Parliament is currently considering passing new laws later this year which could impose £70 fines for anyone caught parking on the pavement, even if there are no yellow lines or the vehicle is not causing an obstruction, which would make the rules easier for local authorities to enforce.