A driver has been caught on film arguing with a cyclist about how he can ‘safely’ use his mobile phone while driving, only to crash moments later.

The incident was filmed by Scottish cyclist, David Brennan, who had a camera installed on his helmet.

Mr Brennan was cycling on the A739 Switchback Road between Bearsden and Glasgow when he got into a heated argument with the driver. 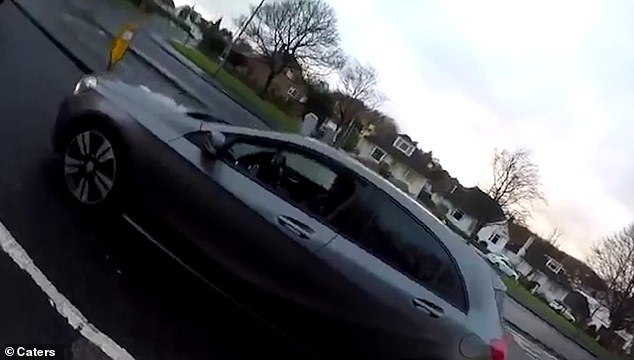 Cyclist David Brennan, wearing his helmet camera, admonishes the driver of the car telling him to ‘get off your phone’ 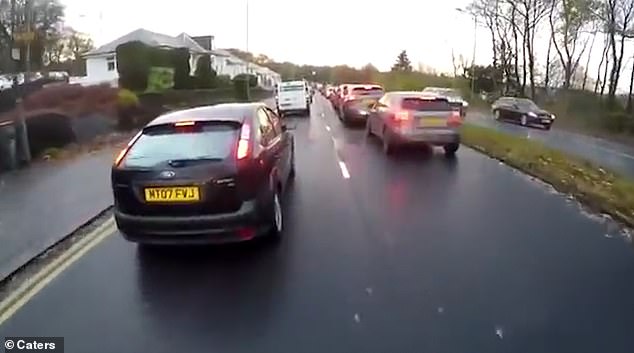 Mr Brennan and the cyclist get into an argument, before the motorist, who insists he can drive safely while using a mobile phone, drives off 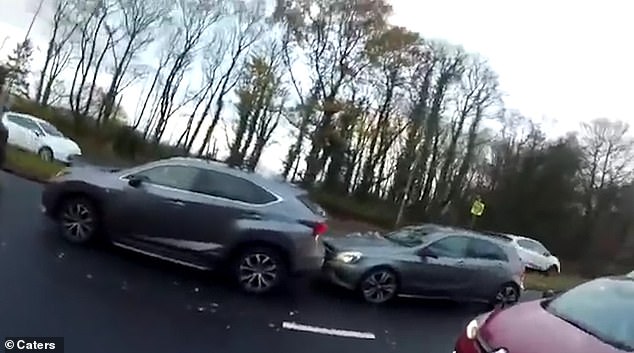 He spotted the motorist on his mobile, shouting ‘get off your phone’ and ‘it’s people like you who kill me’.

The full exchange between the cyclist and the motorist

DAVID: So you’re better than everyone else?

DRIVER: Nobody said I was better.

DAVID: So you can use your mobile phone safely, yeah? You can drive safely?

DAVID: Can you drive safely with your mobile phone?

DRIVER: Yes I can.

DAVID: Wow. I am looking forward to seeing your face on YouTube.

DAVID: Because you’re better than everyone else mate, well done.

DRIVER: I never said that. Cyclists seem to think they own the road.

DAVID: No we don’t. Who said that?

DRIVER: So cycle along now.

After the driver answered David’s question about being able to drive safely while using his phone with a ‘yes.’

He then drove off only to bump a car in front of him in traffic at a slow speed.

He said: ‘I was surprised to see this driver on his mobile phone, especially as he was looking down at it whilst driving.

‘I called over to encourage him to stop using it, as it is not safe to drive whilst look at a phone.

‘He later started talking to me, and during that conversation claimed he could drive safely when using his mobile phone, which is an astonishing admission.’

As the traffic light turned green the driver left David behind, however, the cyclist was quick to pass him again.

He said: ‘There is often a queue of traffic on this road, so it was not unexpected for me to catch up with him.

‘He’d complained I was previously cycling along at ‘3mph’, so I smiled and waved as I went past, pointing out the fact he was the one now doing 3mph.

‘As his window was wound up, I’m not even sure he heard me, but he probably saw me wave.

‘He then proceeded to accelerate forward as the traffic ahead of him stopped and he crashed into the car in front.

Mobile phones and the law

If you are caught using your mobile phone while driving you can receive six penalty points and a £200 fine.

You can also be taken to court where you can be banned from the road or given a maximum fine of £1000.

‘I spoke to the two drivers.

‘I offered my footage to the driver in front as evidence, but they decided to settle it between them.’

Mr Brennan fitted the camera to his helmet 11 years ago, and has previously highlighted the difficulty of reporting incidents in Scotland.

You can receive six penalty points and a £200 fine if you use a mobile phone while driving.

For more serious offences you can also be taken to court where you can be banned from the road or given a maximum fine of £1000.