The 18th time thieves tried to steal meat mogul Evan Wexler’s exotic sports cars, he ran naked from his bed with a loaded semi-automatic rifle to fire warning shots from his porch.

The gunfire worked and the thief fled.

But Wexler, 56, has bared his frustration with police he claimed were more concerned with his vigilantism than catching the callous car bandits who have targeted his Ferrari, Lamborghini and Hummer collection for the past two years. 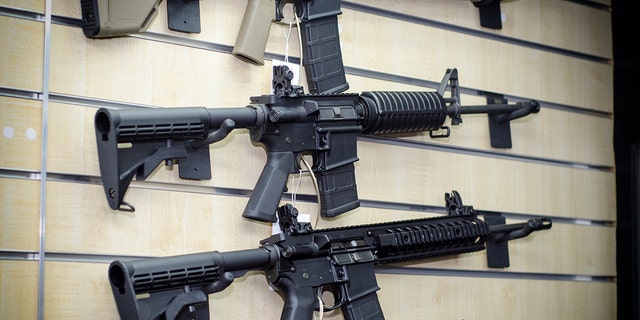 After growing impatient and frustrated with police, Evan Wexler took matters into his own hands by using a semi-automatic rifle to fend off thieves from his exotic car collection.
(iStock)

As recently as Sunday night, CCTV footage shows, thieves broke into his Mercedes G-Wagon parked in his Fort Lee, New Jersey, driveway, looking for keys to his more exotic rides. It was the same M.O. thieves used last August to steal his rare Lamborghini Aventador SVJ Coupe worth more than half a million dollars, Wexler said.

The Lamborghini, which at the time was one of 10 in America, was found a week later with $80,000 worth of damage at an abandoned Newark house.

The second-generation butcher-turned-high-end hamburger and steak supermarket wholesaler, who goes by “the sophisticated gentleman” on Instagram, lives in a mansion in the exclusive Bluff section of Fort Lee overlooking the Hudson River.

Wexler claims to have called police 25 times during attempted heists since August 2019 but Fort Lee police have only caught the thieves once, earlier this year.

The colorful businessman found himself in police cross hairs after he discharged his AR-15 rifle during an attempted theft in the early hours of March 25, 2020.

Cops originally charged Wexler with aggravated assault and possession of weapons for unlawful purposes, but he grudgingly pleaded guilty to a lesser charge of possession of a deadly weapon to make the case go away. That weapon was a different gun police found on his property, which was illegal because the magazine held too many bullets.

“An incident happens where a guy gets my car started, I came out of the house with a rifle, the guy puts the car into drive, drives forward, and my gun discharges.

“At that point, Fort Lee police show up, there’s no victim of a shooting, but they come and turn the tables on me.”

Dramatic CCTV footage showed the moment the thief caught sight of Wexler and his gun, parked the car, bailed out and sprinted in the opposite direction.

In an arrest report tendered to the Fort Lee Municipal Court, police officer Jonathan Kim acknowledged there was an “extensive history of reports with the Fort Lee Police regarding suspects attempting to steal [Wexler’s] vehicles.”

After pre-trial intervention, Wexler was forced to sell his guns and was slapped with probation for two years, which requires him to seek permission from the courts every time he wants to travel.

Wannabe car bandits still sneak onto Wexler’s property in the dead of night every two weeks, on average, he says, but he feels powerless to stop them.

“I have had too many sleepless nights because I’m helpless.

“At least when I had guns in the house, I knew if they came into my house I had some protection, but now all I have is a dog.”

In response to questions about what they are doing to catch the thieves in the act, Fort Lee police claimed they have increased patrols in “the affected areas” and have been on a social media blitz reminding residents to lock their cars.

“The department has assigned officers and detectives who have walked neighborhoods affected to educate residents to please lock your door and take your fobs.”

Wexler conceded he occasionally leaves his daily drive unlocked, but only on rare occasions, and his collectible cars are fortified behind the best security gates money can buy.

“I sometimes forget to lock the car, but most times the car’s locked,” he said.

“The cops tell me to lock my doors and I show them videos of people coming into my property trying to open my locked cars.”

“The motion sensor is a blessing and a curse, because now I see how often these guys are coming to my house, all nights of the week,” he said.

“I keep calling the police and showing them videos to prove I’m not crying wolf.

“I’m begging them to deter these guys, but they’re not doing s–t.

“The cops show up too late or go on high-speed chases but they never catch anyone.”

The anxious car enthusiast now habitually drives around the neighborhood checking for thieves before feeling safe enough to park in his driveway and lies awake at night waiting for criminals to show up.

This story first appeared in the New York Post