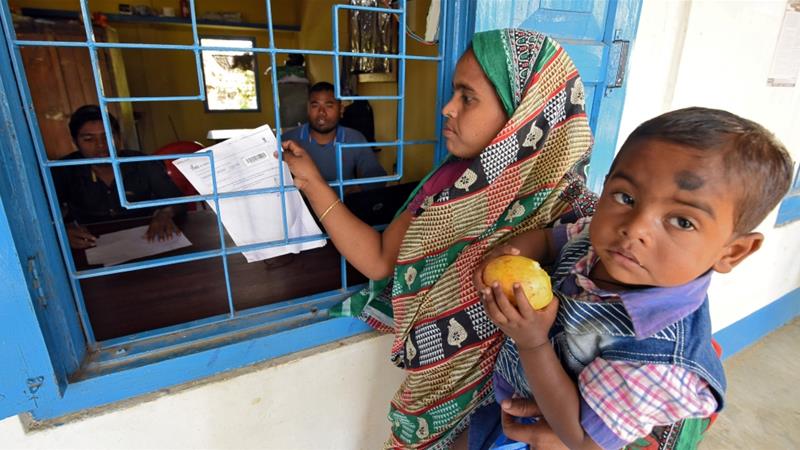 Guhawati, India – Nearly five million people in India’s eastern state of Assam face the threat of deportation after a top government official said they have failed to provide documentation proving that their families lived there prior to 1971.

The risk comes as the government of Assam prepares to publish a preliminary list of citizens to incorporate into its National Register of Citizens (NRC).

Authorities say the updating process – carried out for the first time in six decades – is aimed at detecting and deporting undocumented immigrants from Bangladesh.

But critics have condemned the effort, saying it threatens to make Muslim citizens and long-term refugees of Bangladeshi origin stateless – similar to Myanmar’s treatment of its Rohingya minority.

Assam is home to more than 32 million people, about a third of whom are Muslims.

Prateek Hajela, the official tasked with updating Assam’s NRC, told Al Jazeera on Wednesday that some 4.8 million people in Assam “have failed to provide appropriate legacy documents” in advance of the preliminary list’s publication on Saturday – the second time such a list is being published, the first being at the beginning of the year.

Prime Minister Narendra Modi’s Hindu nationalist Bharatiya Janata Party, which came to power in Assam in 2016, has vowed to expel people who are not listed on the NRC.

“All those whose names do not figure in the NRC will have to be deported,” Himanta Biswa Sarma, Assam’s finance and health minister, told reporters on Wednesday, without clarifying where those affected would be expelled to.

He said the local government has mobilised more than 40,000 police officers and paramilitary troops in the border state before the preliminary list’s publication.

“We are taking no chances and hence, all security measures have been taken.”

Hindu people of Bangladeshi origin will be allowed to stay in India, he said, in line with federal policy to shelter Hindus who face persecution in their home countries.

Tens of thousands of refugees – both Muslims and Hindus – fled to Assam from Bangladesh during its war of independence from Pakistan in the early 1970s.

Anti-migrant sentiment has long festered in the border state.

In the 1980s, hundreds of people were killed in anti-immigrant protests, resulting in a 1985 accord between the government and protesters, which declares anyone who entered the state without documents after March 24, 1971, to be a foreigner.

In order to be recognised as Indian citizens for the latest update, all residents of Assam had to produce documents proving that they or their families lived in the country before that date.

The process is being overseen by India’s Supreme Court, which has ordered the final register to be published by June 30. The top court also gave Assam’s government a June 30 deadline to complete the verification process.

In February, the government requested an extension, saying it was “impossible” to meet that deadline. But the court turned down the request, saying its job was “to make possible the impossible”.

Judges also refused to appoint a second coordinator to help with the verification process, while also ordering Assam’s government to hold local council elections – slated for April – without affecting the NRC update.

Abhijeet Sarma, president of the Assam Public Works, a group that petitioned the Supreme Court to expedite the NRC update in 2009, hailed the judges’ decision.

“We welcome the Supreme Court’s unambiguous verdict that leaves the government with no options but to comply without making excuses,” he told Al Jazeera.

The Supreme Court is helping to “fulfil the aspirations of ethnic Assamese, who have faced a demographic invasion from East Bengal which is now Bangladesh,” said Sammujal Bhattacharjee, chief adviser to the All Assam Students Union, another group that campaigned for the registration drive.

Hajela, the state coordinator for the NRC, described the verification process – a task not carried out elsewhere in the country – as “difficult”.

“During the verification process, discrepancies or mismatches have been noticed in the family trees and those persons are being called for on-the-spot verification. It is a difficult process, as all members of a family may not live in the same place,” he said.

Another official, who spoke on condition of anonymity, told Al Jazeera it was “unlikely” that most of the 4.8 million people identified as lacking proper documentation would make it to the NRC.

Altaf Hossain was among those told he lacked the appropriate documents.

“I am not in the first list of NRC and I have learned the authorities have found a mismatch in my family tree,” said the shopkeeper in Assam’s western district of Dhubri bordering Bangladesh.

“My family has lived in Assam since 1942, but now I could be one of the millions of stateless persons here.”

In Assam’s Barak Valley, a Hindu carpenter said his name was not on the list either.

“My great-grandfather came to Assam from what was then East Bengal in the 1930s,” said Anil Sutradhar, from Karimganj town.

“If I can’t get my name in the next list, it will be a disaster. Can I go back to Bangladesh now?”

Will Assam be the next Rakhine?

Local politicians have said that all undocumented migrants must be sent to Bangladesh.

But Asaduzaman Khan Kamal, Bangladesh’s home minister, denied any knowledge of Indian plans to deport anyone to his country from Assam.

“We have no intimation of such a possibility,” he said last week.

Critics fear such a move would trigger a crisis similar to that in Myanmar’s Rakhine State where members of the Rohingya minority, who are mostly Muslim, were stripped of their citizenship in 1982.

“Will Assam be the next Rakhine?” Utpal Bordolo, a local political commentator, asked in an article for the South Asian Monitor in February.

“We cannot rewrite history and such an exercise in the hands and minds of prejudiced, petty-minded and discriminatory groups will destroy Assam’s social fabric, which has been bleeding for decades,” he said.

“The dangers in labelling a community and individuals as ‘Bangladeshi’ on the basis of a general feeling of animosity can’t be stressed beyond a point.”