CARACAS (Reuters) – Furious Venezuelans lined up to buy water and fuel on Sunday as the country endured a fourth day of a nationwide blackout that has left already-scarce food rotting in shops, homes suffering for lack of water and cell phones without reception. 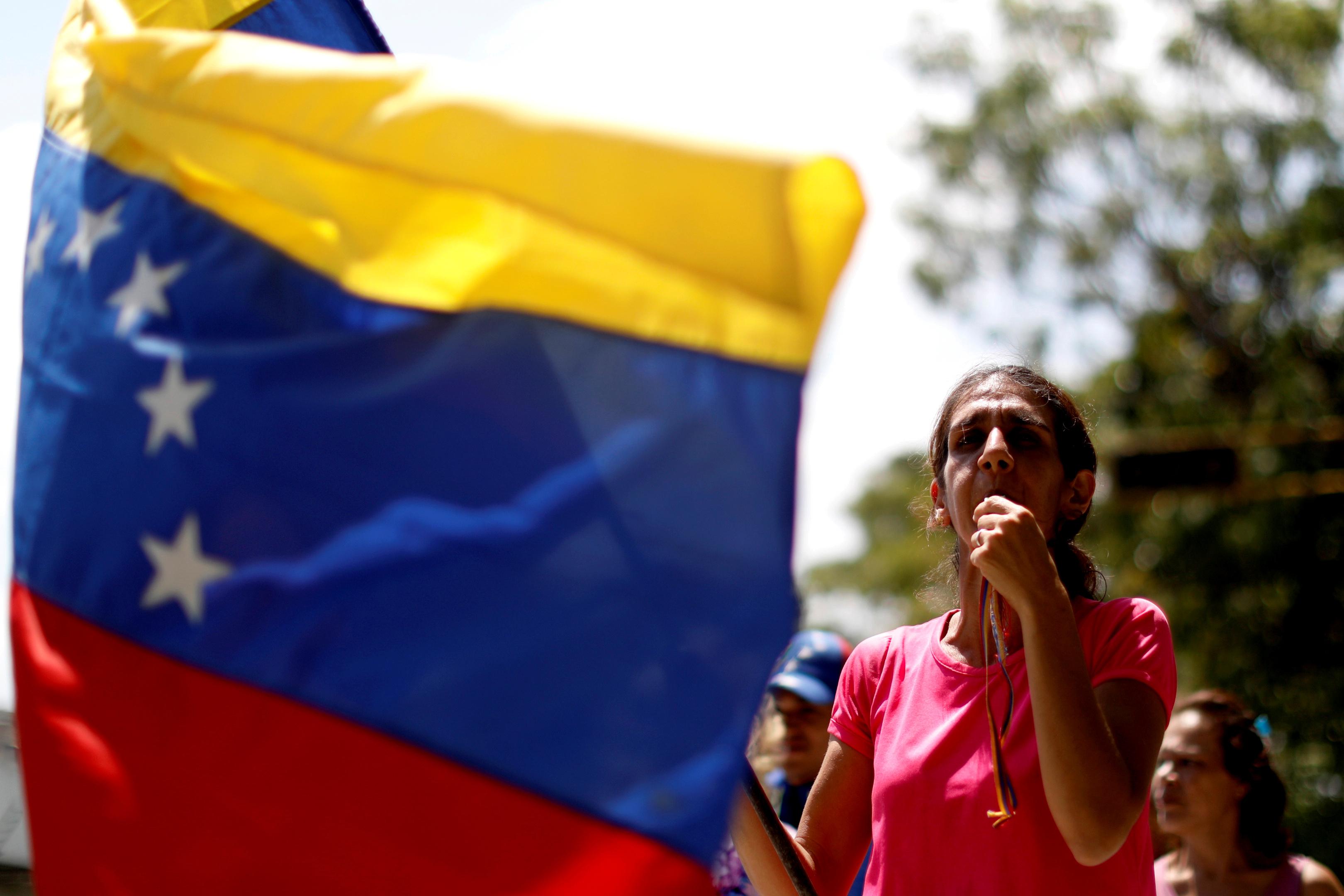 Authorities have managed to provide only patchy access to power since the outage began on Thursday in what President Nicolas Maduro called an act of U.S.-backed sabotage, but critics insist it is the result of incompetence and corruption.

The government on Sunday suspended school and business activities for the following day without providing any information on a likely time frame for resolving the situation, leaving many fretting that it could extend indefinitely.

Angry residents of the Caracas neighborhood of Chacao on Sunday set up barricades along a main avenue and on side streets to protest the continued blackout.

“The food we had in our refrigerators has spoiled, businesses are closed, there’s no communication, not even by cell phone,” Ana Cerrato, 49, a merchant, standing in front of a pile of razor wire and debris.

“We need help! We are in a humanitarian crisis!”

Lines at fuel stations extended for blocks as drivers queued for gasoline and busses waited to fill up with diesel. Families stood under the sun to buy potable water, which is unavailable for most residents whose homes do not have power.

State oil company PDVSA said on Sunday that fuel supplies were guaranteed. But only around 100 of the country’s 1,800 service stations were operating due to the blackout, according to gas station industry sources.

Other shops had supplies stolen.

One supermarket in southeastern Caracas was looted on Sunday evening, triggering a shootout with police and National Guard troops, according to Reuters witnesses and an employee who was present. The looters took food including pasta, rice and tomato sauce.

A neighboring shop selling home goods such as plastic chairs was also looted.

The National Guard rounded up more than 40 people at the scene, tied their hands behind their backs and ordered them to lie face down on a road that authorities had blocked during the confrontation, a Reuters witness said.

On Saturday night, a small supermarket in a working class area of western Caracas was looted after protesters barricaded an avenue and clashed with police, according to neighbors and the shop’s owner, Manuel Caldeira.

“They took food, they broke the display windows, they stole scales and point of sale terminals,” said Caldeira, 58, standing on the shop floor littered with glass. “We weren’t here (when it happened), we got here and found all of this destroyed.”

Guaido slammed Maduro’s government for failing to explain what was going on.

“The regime at this hour, days after a blackout without precedent, has no diagnosis,” he said at a news conference on Sunday.

Information Minister Jorge Rodriguez said on state television that the government was taking care of the situation, without offering technical details on what was causing the continued outage.

“While the promoters of hate, death and violence delight in their destabilization plans, President Nicolas Maduro has ordered a deployment of ministers to ensure the Venezuelan people are attended to,” he said.

Guaido invoked the constitution to assume an interim presidency in January, arguing that Maduro’s 2018 re-election was fraudulent. He has been recognized as Venezuela’s legitimate leader by the United States and most Western countries, but Maduro retains control of the armed forces and state functions.

The so-called Lima Group of nations, which includes Latin American countries that have vocally opposed Maduro, said in a statement that the blackout was confirmation of “the humanitarian crisis that Maduro’s regime refuses to recognize.”

Elliott Abrams, the Trump administration’s envoy for Venezuela, said Maduro is not open to negotiations and seems intent on staying put.

Speaking on ABC’s “This Week” program, U.S. National Security Adviser John Bolton said Venezuelan military officers were having conversations with opposition legislators “about what might come, how they might move to support the opposition.”

At Venezuelan hospitals, the blackout combined with the absence or poor performance of backup generators led to the death of 17 patients across the country, non-governmental organization Doctors for Health said on Saturday.

Power returned briefly to parts of Caracas and other cities on Friday, but went out again around midday on Saturday.

“One can infer from the delays and the results of the failure that it was a problem in the lines that leave Guri, rather than in the plant itself,” said Miguel Lara, a former president of the state-run entity responsible for the electricity system, referring to the Guri hydroelectric power plant which supplies most of Venezuela’s electricity.

The extent of the blackout’s impact on the country’s crude oil production – the source of nearly all the government’s export earnings – remained unclear.

Most of the key joint ventures between PDVSA and foreign partners in the Orinoco Belt, the country’s main crude region, run on their own generators. But many fields in western Zulia state depend on the grid. One source at a foreign company partnered with PDVSA in a joint venture said output was “stable.”

PDVSA did not respond to multiple requests for comment.